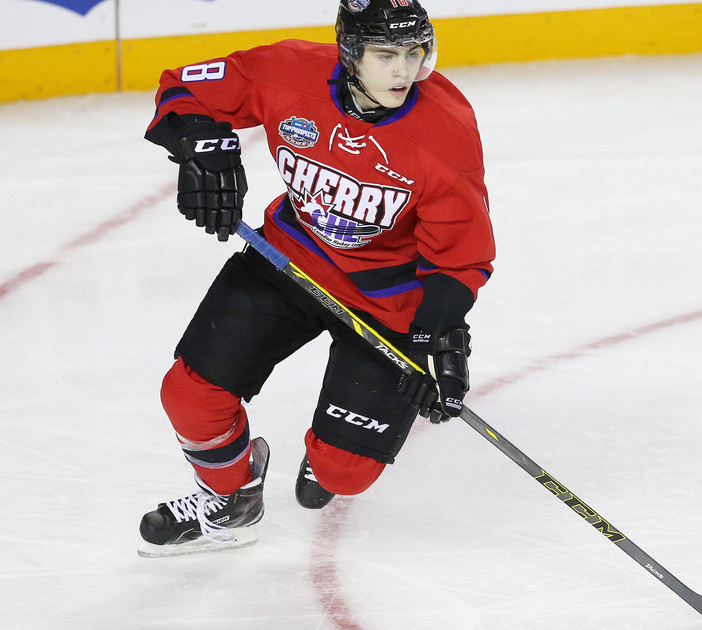 Position: Left Wing
Shoots: Left
Height/Weight: 6’0 174 lbs
Born: October 17, 1996, Edmonton, AB
Central Scouting Rankings (Prelim/Mid/Final): ”B“/ 24th NA / 19th NA
Obtained: Selected by Swift Current in the 7th round (137th overall) in the 2011 WHL Bantam Draft.
Notes: 2014-15: Led Swift Current in goals (42) and points (81) …Was second in goals and fourth in points among all WHL left wings, and ninth in the entire league in goals created (28.58)…Registered at least one point in 29 of last 40 games, posting 54 points in that span…Tallied seven points (three goals, four assists) in the final two games of the regular season to help Broncos pass Moose Jaw for final playoff berth…Represented Team Cherry at the 2015 CHL Top Prospects game…2013-14: Led all Swift Current rookie forwards in goals (15) and assists (24) during the regular season, and tied for second among all Broncos in playoff scoring with four points (three goals, one assist) in first round loss to Medicine Hat.

Scouts won’t likely be divided on this offensive dynamo, who will probably cause general managers and scouting directors more sleepless nights today and further down the road than any other draft eligible (we mean that in a good way). DeBrusk, an Edmontonian whose father Louie was a Rangers draft pick in 1989 but later shipped to the Oilers in 1991 in the Mark Messier deal , is a lethal goal scorer who has a lot going for him between the ears. He’s not as physically intimidating as his Dad was (not many players are), but he’s a battler who will do whatever it takes to get into prime scoring position, where he was one of the CHL’s most feared snipers. DeBrusk has the makings of a top-6 NHL’er because of his scoring prowess, but he’s also a leader who has proven he can carry a team when they needed him most. He makes smart plays in all three zones and is a very good skater who reads plays well enough to avoid costly mistakes. DeBrusk is a lot like Corey Perry from a goal-scoring standpoint, in that he does not possess a specific mind-blowing skill, yet continuously beats every tactic thrown against him for a handful (or more) of scoring chances every game. He’s always thinking offense, and as a top player on a weak team, you can’t really fault him for that. DeBrusk’s obviously had the right people mentoring him along the way, which is partly why his stock is so in demand.