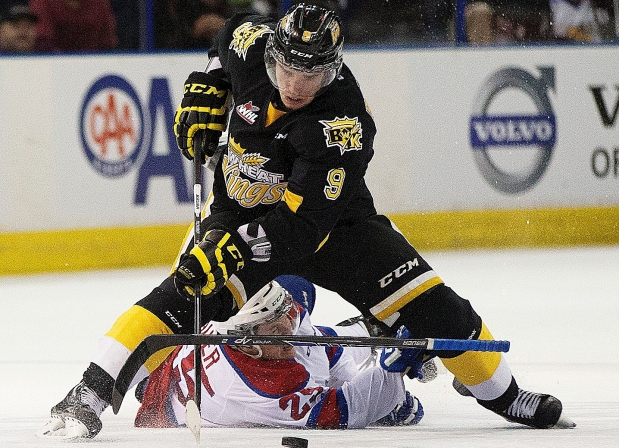 Position: Defense
Shoots: Left
Height/Weight: 6’0″ 200 lbs
Born: January 13, 1997, Yaroslavl, Russia
Central Scouting Rankings (Prelim/Mid/Final): “B” / 10th NA / 7th NA
Obtained: 2014 CHL Import Draft (1st Round, 30th Overall)
Notes: Led WHL rookies in scoring and finished fourth among defensemen with 61 points (15 goals, 45 assists) in 60 games…was runner-up to Seattle’s Shea Theodore for WHL’s Defenseman of the Year…Named to WHL’s 2015 First All-Star Team…registered one assist in seven games for silver medal-winning Russian team at 2015 World Junior Championship…Picked up an assist and was +3 for Team Orr in 6-0 win over Team Cherry at 2015 BMO CHL Top Prospects Game…Tied for second among Cedar Rapids defensemen with six goals in 2013-14…Left Cedar Rapids just before 2014 USHL playoffs to play for Team Russia at World U18 Championships, where he did not register a point in five games as Russia finished fifth…Drafted in third round (120th overall) by Lokomotiv Yaroslavl in 2014 KHL Draft…Drafted in first round (fifth overall) in 2013 USHL Futures Draft.

Remember that lengthy pre-lockout period when a Russian-trained defenseman was seemingly always picked in the first round? Between 1992 and 2002, 15 rearguards from the former Soviet Union held that distinction, including five in the top-10 of their respective draft year. By 2014, however, the trend slowed down significantly, as only three Russian blueliners between 2003 and 2014 were first rounders . Enter Brandon defenseman Ivan Provorov, who unlike the majority of his predecessors, developed his game in North America as early as adolescence. Provorov is an outstanding two-way defenseman known more for his ability to nip scoring chances in the bud at an elite level. He’s a very good skater who can change the pace of a game; smooth, deceptively quick and very good at changing gears to catch opponents flat footed. He’s listed at 6’0, but at 200 pounds, he maintains a low center of gravity which makes him very difficult to establish position on. Provorov also uses a very long stick which helps him execute timely poke checks. Couple his reach with his elite positioning, and you have one of the best amateur defensemen at limiting opposing puck handlers with time and space. He is able to play his man close enough to allow him to blanket the puck carrier, even if they stop on a dime and reverse the direction of the puck. He’s the blueline equivalent of Guy Carbonneau; a modern-day permanent shadow. What exacerbates the situation for opponents is how quickly he can transition the other way. Provorov has a very hard and accurate breakout pass and can find the open man in and around traffic. He’s a workhorse who can log a lot of minutes and recover quickly from a long shift, which is important since he is a critical piece to running Brandon’s top special teams units. He also possesses a very heavy shot which he can deliver with velocity either standing still or while stepping into it. A complete player who has the desire and competitiveness to win while setting a good example with skill, dedication and a keen interest in improving himself. Although he thinks the game at a high level, there are times where you want him to take more risks on the offensive end and not settle for the safe play all the time, specifically dropping down to the top of the circles more often during a cycle.