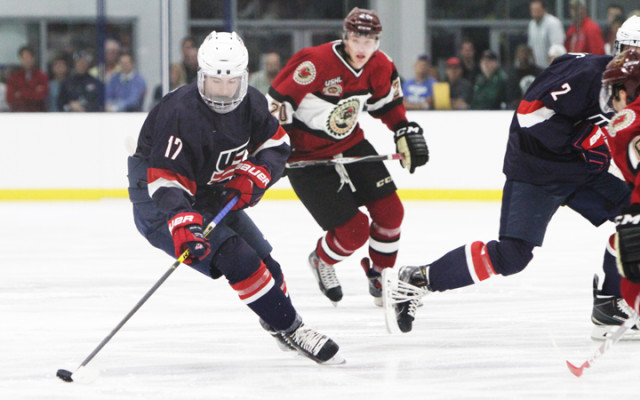 It’s pretty tiresome to hear the same guys compared to the same guys. If I had a dollar for every undersized forward who was compared to Theoren Fleury between 1989 and 2000, I’d have had enough dough in say, 1999, to sign Fleury to a really expensive contract, only to see him not play like Theo Fleury. But I digress; Jeremy Bracco, an exceptional offensive wizard blessed with an off-the-charts IQ and considerably more creativity than most in his draft class, is always noticeable when he’s on the ice. In a weaker draft year, Bracco would likely be a top-10 pick, especially since general managers’ needs are trending toward skill and smarts over size and physicality. He is a tireless worker with enough grittiness and compete level equal to the Barzal/Marner/Merkley class of undersized playmakers, as are his vision, patience and puck control. Bracco has a very good wrist shot and he seems to favor it, but he can release a hard, accurate backhand. He can also elevate the puck from in close, whether shooting from at or near is feet or overextended. These offensive tools serve him well in the battlefields below the circles, where real estate is at a premium and provides little solace for the unskilled. Bracco’s also developed a nice big game reputation, adding benchmark events to his resume while playing for the United States National Team Development Program. Bracco has repeatedly shown up in key matches on the international stage, regardless of whether he drew top matchups or was relegated to second line duty. He is a very good skater with breakaway speed; extremely elusive and shifty in the offensive zone; enough to slip through or around defenders with superior puckhandling and puck protection. Naturally, a guy his size is going to get sealed off quite easily, but the trick is to position oneself to seal him off. Bracco is excellent at avoiding contact, but in a good way. He quickly identifies gaps in defensive zone coverage, and if the coverage is sound, will draw checkers out of position, then make a play — pass or shot — as a result of the opening he created. He is one of the few in this draft who can “call an audible” at the sight of danger, and quickly develops chemistry with linemates so they too know what he’s thinking. I mean, he could have gone to Harvard, for crying out loud. He knows a thing or two about a thing or two. I’ll compare Bracco to one player: a player who shows up when it matters and makes his linemates better.