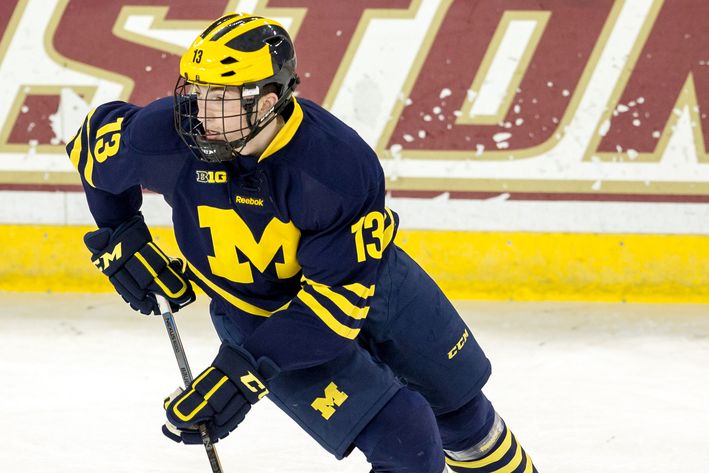 Position: Defense
Shoots: Left
Height/Weight: 6’2″ 214 lbs
Born: July 19, 1997, Grosse Pointe, Michigan
Central Scouting Rankings (Prelim/Mid/Final): “A” / 6th NA / 9th NA
Obtained: Signed a letter of intent to the University of Michigan, July 17th, 2014
Notes: Named to 2015 First Team All-Big Ten and Big Ten All-Rookie Team…Led all Michigan defensemen in scoring with nine goals and 26 points and tied for team lead with 59 blocked shots…His nine goals were third most by a Michigan freshman defenseman since the Wolverines joined the CCHA (now Big Ten) in 1980-81…Finished tops among NCAA Division I freshman blueliners in goals and points per game (0.71), while tying for most power play assists (nine) and power play points (12)…Registered a goal and an assist with a +3 rating in five games for Team USA at the 2015 U20 World Junior Championship…Accelerated his schooling by one year in order to be eligible to compete in the NCAA in 2014-15…Finished second on USNTDP in defenseman scoring with 31 points in 47 games…Picked up an assist in six games on Team USA’s gold medal-winning squad at the 2014 U17 World Hockey Challenge…Selected by the London Knights in the 2nd round (24th overall) of the 2013 Ontario Hockey League Priority Selection.

Breezing through the NCAA in what was supposed to be his senior year of high school, Zach Werenski gave us a taste of what should the beginning of a very decorated career as a collegiate defenseman, and maybe beyond. Skill-wise, he is the draft’s most tantalizing blueline prospect; more so than peers Noah Hanifin and Ivan Provorov in that he’s not only taller than the aforementioned rearguards, but possibly more gifted. It is to the point where he almost comes across as nonchalant, because you are left asking yourself if it’s possible to make otherwise spectacular plays seemingly effortless, and doing such on a shift-to-shift basis. In that regard, he is essentially a bigger version of Phil Housely, where a simple flick of the wrists or a pirouette while on the power play is the difference between a turning a relatively pedestrian shift into time and space in the offensive zone. In other words, Werenski is an offensive catalyst for a Michigan team that was far from devoid of offensive playmakers. He is an excellent puck handler and decision maker with the puck on his stick, providing a calming presence and poise, especially when his mates are forcing plays. It says a lot when a coach like Red Berenson hands the keys to the proverbial Cadillac to his most inexperienced underclassman. Be that as it may, Werenski’s greatest attributes are actually skating and shooting. In terms of covering ground while displaying a imposing silouhette, no draft eligible defenseman can offer what he can. There is always something impressive about a defenseman with size who can skate. What separates Werenski from the pack is that he’s going to get bigger and faster as he develops. He features a very hard shot with a quick release, relying on little to no backswing to accurately deliver the puck on net with velocity. Same goes with his passing — hard, tape-to-tape passer and can do it flat footed, fading away or motoring up the ice. So what’s missing? You wish he played with more intensity and physicality, the former likely misinterpreted while the latter is just how he plays the game — he’s no Rob Blake, at least not at this stage of his development. He does, however, show an even keel regardless of the situation, and it is his composure while running an offense which makes him so desirable.