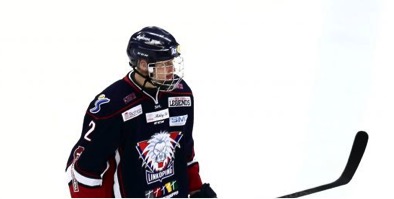 Position: Defenseman
Shoots: Left
Height/Weight: 6’4 183 lbs
Born: January 2, 1997, Orebro, SWE
Central Scouting Rankings (Prelim/Mid/Final): ”B“/ 6th Eur / 2nd Eur
Obtained: Signed with Linkoping HC in July, 2013
Notes: 2014-15: Promoted to SHL after he had a strong SuperElit campaign, ranking fourth among J20 defensemen in plus/minus with a +21…Tied for second among Linkoping defensemen in scoring with two assists in seven playoff games…Played in five games for Team Sweden at 2015 U18 World Championship…2013-14: Spent season with Linkopings’ U18 club…Played in five games for Team Sweden at 2014 World U17 Hockey Challenge…Picked up an assist in and was +5 in five games at 2014 Ivan Hlinka Memorial Cup

Gabriel Carlsson made his SHL debut this year without the trophy case full of awards he was supposed to have won playing in the lower SuperElit and Allsvenskan. Heralded as one of Sweden’s best junior defensemen coming into the season, Carlsson’s draft stock has taken a bodyblow or two because he simply did not provide enough offense. It is not, however, a question of limitations and capabilities, but more a byproduct of a strict dedication to the craft of defending. There’s actually some finesse to Carlsson’s game; you just have to pay attention to catch a glimpse of it. He’s a very good forward/backward skater who is strong on his skates, and has shown several times that he can make you look foolish, especially if you buy into the idea that he won’t cheat or take chances. At both the U18’s and the Ivan Hlinka, Carlsson showed the ability to advance undetected into the circles and make smart plays once the puck is on his stick. He’s a pretty good passer and quick to make the right decision when given the opportunity. His dedication to defending his position is part of his upbringing within the Swedish system, but mostly due to fellow blueliners who were specifically tasked to push forward, leaving Carlsson as one of the reliables staying behind. In other words, the kid has the ability to create offense, and it’s going to be up to the drafting organization to groom him as a two-way threat. It’s hard to tell whether his future in the NHL will be as that kind of option, but at worst, Carlsson is a rock-solid positional defender who can be counted on to stand up and makes plays at his own blue line. He is an excellent transitional rearguard who passes the puck well and quickly — skills you saw glimpses of in his brief stint in the SHL against older competition. And while he doesn’t necessarily check with authority, you can see the potential of a solid checker who will use his size, reach and leg drive to completely isolate opponents into an untenable situation.