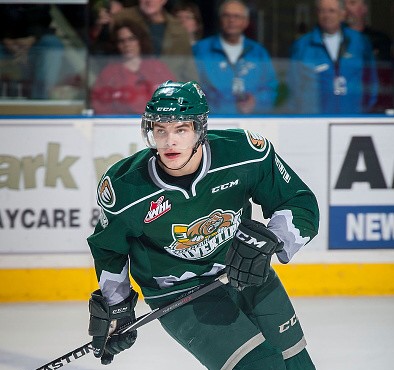 Position: Defenseman
Shoots: Right
Height/Weight: 6’2 182 lbs
Born: April 2, 1997 Abbotsford, BC
Central Scouting Rankings (Prelim/Mid/Final): ”B“/ 38th NA / 22nd NA
Obtained: Selected by the Everett Silvertips in the fourth round (70th overall) in the 2012 WHL Bantam Draft
Notes: 2014-15: Tied for fith among WHL defensemen with 43 assists and finished tied for ninth in scoring among blueliners with 52 points in 68 games…his +22 was second highest on Everett…Had a hand in 23 percent of the Silvertips’ goals — the highest team support percentage among all draft eligible defensemen…Helped lead Everett to its first playoff series win in eight seasons with an assist and a +5 rating in six games during first-round win over Spokane…Missed entire second-round loss to Portland due to an undisclosed injury…Played for Team Cherry at 2015 BMO CHL Top Prospects game…2013-14: Led all Silvertips defensemen as a rookie with a +12 rating…Helped Team Pacific win a silver medal at the 2014 World U17 Hockey Challenge with a goal and an assist in six games.

With all the hype surrounding what has been dubbed a deep and talent-rich draft, it’s fairly easy to overlook some real merchandise even if it’s staring at you smack in the face. One of the draft’s most complete players regardless of position does not have an extensive international resume, nor does he possess a defining moment or statistic to pin on his profile. Noah Juulsen, the masterful defensemen for the WHL’s Everett Silvertips, simply has been one of the best players on the ice night in, and night out. It’s just unfortunate that most of what he can and does provide is very difficult to quantify into a briefable stat. What we can discern from watching him is that he is a tremendous two-way defenseman who can crisply pass the puck, expertly position himself to increase the likelihood it ends up back on his stick, and physically punish the heck out of the unaware and indecisive. Juulsen may not be the thickest rearguard, nor should he be considered a swift skater. But what he most certainly provides is exceptional offensive awareness, specifically on creating time and space for a sound breakout, and finding the open man with consistent accuracy. All you really need to see is a shift or two, and Juulsen makes you an instant believer in both his reliability and importance while serving as Everett’s multi-situation top defenseman. Easily one of the draft’s premier players in terms of on-ice maturity, he’s also a leader who can be counted on to rally the troops vocally or by example. Juulsen was instrumental in shutting down Spokane’s powerful top line for most of Everett’s first-round win, and more of the same should be expected when he is handed similar responsibilities at higher levels.