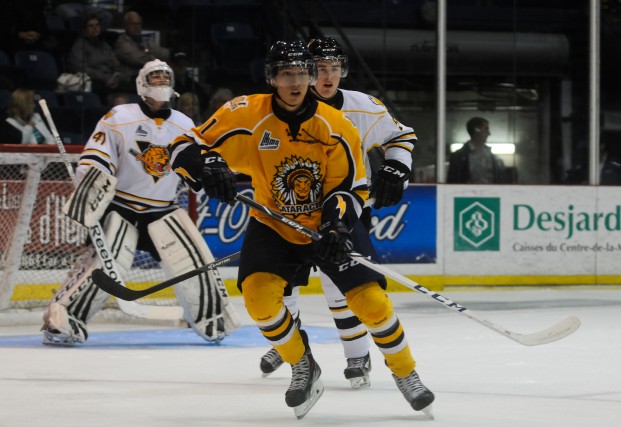 Position: Left Wing
Shoots: Left
Height/Weight: 6’1 188 lbs
Born: April 14, 1997, Portland, OR
Central Scouting Rankings (Prelim/Mid/Final): ”C“/ 35th NA / 30th NA
Obtained: Selected by the Shawinigan Cataractes in the first round (eighth overall) in the 2014 CHL Import Draft
Notes: 2014-15: Tied for QMJHL rookie lead in both goals (33) and power play goals (10) while his +23 was tops among first-year players…scored seven goals and added an assist in seven playoff games…his 1.00 postseason goals-per-game average was the highest among all CHL rookies…Scored 15 goals in final 16 games between the regular season and playoffs…Played for Team Cherry at 2015 CHL Top Prospects Game. 2013-14: Spent entire season with U.S. U17 team…Registered a goal and two assists in six games mostly playing on the fourth line as Team USA steamrolled to a gold medal at 2014 World U17 Hockey Challenge…Tied for second on Team USA scoring with eight points (four goals, four assists) in five games at 2014 Ivan Hlinka Memorial Cup…Selected in the second round (66th overall) by Lokomotiv Yaroslavl in the 2014 KHL Draft…Born in the U.S. but grew up in Russia before relocating back to North America, where he played for the Belle Tire program.

The U.S. National Development Program and the Quebec Major Junior Hockey League are equally notorious for churning out some of hockey’s top-end talents. Yet it is highly uncommon for a draft eligible to claim both as a stepping stone towards being selected by an NHL club and hold Russian citizenship to boot. This rare trifecta is exactly what Shawinigan sniper Dennis Yan can claim after the left wing moved from his native Portland to Russia before he re-emigarted to North America to play amateur hockey with some of the continent’s notable development programs. So in a way, Yan, who also played organized hockey in Russia, has been literally run through an international gauntlet of instruction. The result is an bonafide skilled forward who is one of the 2015 crop’s best pure goal scorers. Yan does not necessarily play the cliche’d “North American game”; he’s a speedy finesse winger with a world class wrist shot who thinks offense first. The benefits of playing here seem to relate more towards the maturity and humility inherent in most migratory young players who are thrust into different learning environments. Nevertheless, acutely watching him reveals an offensive talent who can think the game and not let many things distract him. While his wrist shot and IQ are his most noticeable attributes, he is a highly-reliable and inventive attacking player during 3-on-2’s and the undervalued (and oft-butchered) 2-on-2 situation — give him enough room and he’ll wire a wrist shot through a screen while cutting against the grain. He’s not a dump-and-chase player although he can be highly effective on the forecheck, and when he gathers the puck, he’s shown to thread the needle through some tight spaces. Yan’s compete level is can reach a crescendo but then really crash down to the point of disinterest. All accounts indictae, however, that he does like to compete and has a strong desire to improve every aspect of his game, not only making him coachable, but worthy of larger responsibilities down the road.