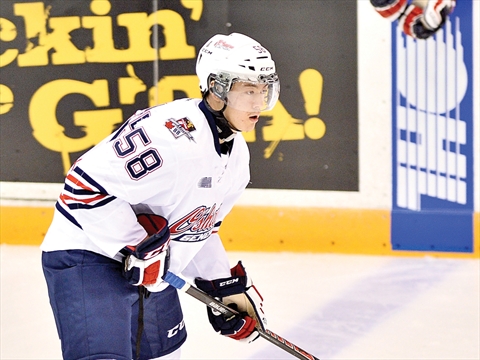 Position: Defenseman
Shoots: Left
Height/Weight: 5’10 183 lbs
Born: February 11, 1997, London, ON
Central Scouting Rankings (Prelim/Mid/Final): ”B“/ 33rd NA / 34th NA
Obtained: Selected by the Oshawa Generals in the first round (14th overall) in the 2013 OHL Priority Selection
Notes: 2014-15: Finished fifth among OHL defensemen with 63 points (12 goals, 51 assists)…Tied with Michael Dal Colle (NYI) and Cole Cassels (VAN) to lead Generals in assists…Missed three weeks, including the 2015 CHL Top Prospects Game, due to a midseason upper-body injury…Oshawa’s top-ranked power play went 4-for-32 (12.5 percent) during Vande Sompel’s injury…tied for second among OHL defensemen with five playoff goals and finished fourth in defenseman playoff scoring with 14 points in 21 games…Had two assists in four games as top-pairing defenseman to help Oshawa capture its first Memorial Cup in 25 years. 2013-14: Named to OHL First All-Rookie team after he scored five goals and added 15 assists in 47 games…Spent most of season quarterbacking Oshawa’s top power play unit…Missed 13 games after suffering a concussion from an illegal hit by Mississauga’s Damian Bourne on 10/15/13…Tallied a goal and an assist for Team Ontario at 2017 World U17 Hockey Challenge…Had a goal and an assist in three games for Team Canada at 2014 Ivan Hlinka Memorial Cup but missed final two contests, including gold medal game, due to an lower-body injury.

It’s only fitting that Oshawa’s Mitchell Vande Sompel plays for a team called the Generals. Regarded as one of the Ontario Hockey League’s best two-way defensemen, Vande Sompel was an integral piece during Oshawa’s march to its first Memorial Cup crown in a quarter of a century. And while he certainly benefitted from playing with a deep lineup dotted with NHL prospects, you can make a strong argument that neither party could have succeeded without the other. If the Generals were a football team, he’d be their quarterback, especially on the power play. It was during his three-week absence with an injury when Oshawa’s talent-rich forwards struggled mightily with the man advantage, slipping from first to third thanks to a 4-for-32 skid with Vande Sompel on the shelf. His cat-like reflexes, soft hands and decisiveness with the puck make him difficult to not only defend against, but almost impossible to replace. Vande Sompel is an excellent skater with a smooth stride, very good speed and mobility, and can turn quicker than most playing his position. His shot and passes are both made with authority and without hesitation. He is a very hard player to telegraph when he has the puck behind his net because of his unpredictability; if you try to box him in with a static forecheck, he’ll split them with a hard 100-foot pass. If defenders go into a zone, he’ll use the time and space to either burst through openings, or lure opponents towards him before saucering a pass towards the attack with them heading the wrong direction. When it comes to initiating attacks or counterattacks, you’ll be hard pressed to find a better rearguard among his peers. And though it can only help to have top-end finishers to create chances for, Vande Sompel is the kind of player who has the ability to make any kind of player around him better. Defensively, his shortcomings are common for a blueliner under six feet. Vande Sompel is not physical, and his lack of reach and leg drive makes him easy to dance around. He also struggles with battles in front and along the walls, but his stick is very active and he does not give up on plays. When you have a gifted puck distributor playing defense, its up to the coach and front office to build around him. There’s no reason to think he cannot get stronger and improve his play in his own end, but when you can collect and pass the puck out of the danger areas as well as Vande Sompel, you can afford to give him as much time as he needs to work on them.