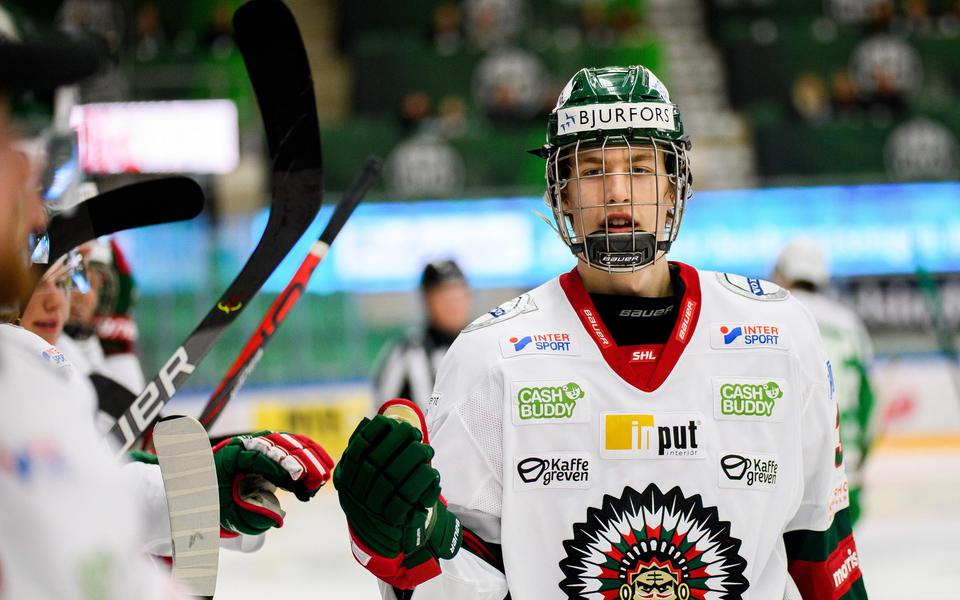 Edvinsson has spent several years carving out his reputation as a premier draft prospect for his play at both the club and international level. After spending almost all of last season in the former Superelit (now Nationell) with Frolunda’s loaded 20 squad , Edvinsson after only 14 games essentially graduated juniors in 2020-21 and spent the remainder of the slate between the adult-age Allsvenskan and elite SHL.

His role and usage differed between second-division Vasteras and Frolunda’s A-Team, with his ice time ranging from about close to 14 minutes with the fomer and six a game with the latter. Edvinsson was Vasteras’ No. 4 and was used on the power play but rarely killed penalties, which also was the case for both his J20 and U18 national teams. In total, Edvinsson scored one goal and added 11 assists in 38 combined games between all three levels of Swedish hockey, but he was Sweden’s No. 1 defenseman at the recent IIHF U18 world championship and finished that tournament with a goal and three assists in seven games to win the bronze medal.

Although Edvinsson’s size and skill set has drawn comparisons to current NHL star Victor Hedman, their respective draft years could not have been more different; specifically when comparing Hedman’s top-pairing, minute-eating role with MODO back in 2009 to Edvinsson’s 10-game sample as Frolunda’s seventh or eighth defenseman. It also should be noted that it was a down year for Frolunda, which limped into the playoffs before being swept by Rogle in the quarterfinals.

The two most impressive aspects of Edvinsson’s overall game are his abilities to bypass or outmaneuver both backpressure and neutral-zone congestion . His size in regards to puck protection also plays a role, but Edvinsson’s agility and elasticity are obvious strengths he has the utmost confidence in. He can play keepaway as well as any teenage defender we’ve seen in recent years, and the timing between when Edvinsson’s prepares to execute a fake to the all-important acceleration into an escape route is both precise and advanced. He also makes plays on his backhand while protecting the puck.

As already explained, Edvinsson is an elite skater, and shows phenomenal maneuverability in any direction. He’s also gained a lot of strength on his edges and doesn’t fall down nearly as much as he did last season. Edvinsson is not a roadrunner with an explosive first step, as he’s more east-west than north-south. But he can and will continue to go end-to-end regardless of whether the conditions are favorable or not.

Edvinsson is flashier in terms of shot creation than setups, as he uses his skating attributes and stick skills to open up a lane in the middle of the ice. He can deliver a hard slap shot without a big windup, yet it is his accurate wrister that appears to deliver better results in both scoring and rebounds created, specifically on the power play. Edvinsson is not a high-volume shooter, however, as his shot generation at every club level and in international play has been moderate — his 2.0 shots-per-game average in 14 games with Frolunda J20 ranked near the bottom among regulars.

Delivering the puck comes effortlessly for Edvinsson, whose combination of fluidity and swagger can make a simple lead pass look fancy. He has very strong wrists that help him fire crisp stretch passes of his back foot, and his accuracy in any direction or off the boards is usually pinpoint. Edvinsson has soft hands and quickly transitions from backhand to forehand, and he’s also executed perfect lobs over neutral-zone traffic to catch a streaking forward in stride. Most of the power plays he’s run at the junior and international levels used the 1-3-1, where Edvinsson is more of a facilitator than a quarterback but still stays in motion with his head up to find a lane or seam to exploit.

“Defense First” isn’t a mantra Edvinsson lives by, but he is by no means a liability and can be smothering in 1-on-1 play, either along the boards or by quickly gapping up on an onrushing forward while wielding an active stick. He’s also quite versatile for being a lefty by seamlessly transitioning from the left or right side. But Edvinsson in these last two seasons frequently ran into consistency issues specific to positional awareness in the defensive zone, which is a nice way of saying he’s prone to leaving gaps in coverage. Although a simple study of his game can excuse this with Edvinsson’s strong desire to remain unbridled while shifting pressure towards the opponent, he still chases around without enough shoulder-checking to identify developing threats. It’s not always like this, but Edvinsson’s snap decisions to vacate his post eventually puts the onus on his forwards or partner to cover the low slot, with the results being somewhat mixed.

Edvinsson can play a physical and spirited game off the puck and has a knack for getting under an opponent’s skin; to the point where he is targeted with major wallops. He’s a solid body checker who on occasion can deliver a hard smash or hip check himself, but sometimes he’ll take himself out of position just to get his point across. Yet even with this abrasive side, Edvinsson deserves credit for keeping it within the rule book and avoiding penalties of any kind, although he was whistled for four minors in six playoff games after taking none in 14 regular-season contests.

From a puck-possession standpoint, Edvinsson clearly shows high intelligence in the manner in which he executes breakouts and keeps things organized in the offensive zone. But playing smart, composed hockey off the puck over a full 60 minutes is something he had difficulty doing for most of this season. He has had several performances where’s he’s been among the best players on the ice for the first 40 minutes, only to lose focus (and the faith of his coach) in critical moments. Edvinsson’s best play has been saved for the international level, which makes sense considered it’s against his peers. Nonetheless, Edvinsson is both a massive risk taker and a rover who when choosing to activate or step up has had both positive and negative implications on the team game, sometimes all within a three or four shift sequence.

There were positive signs, however, at the end of his season with Vasteras, as Edvinsson appeared to cut down on his mistakes and carried his sharp play over to the U18 worlds, where he was decisive and clean in almost every game outside of two blowout losses to Canada. After looking nonchalant and a bit reckless with Frolunda J20 to start the season, Edvinsson in league play started cutting down his options and settled for safe plays when the situation called for them.

Edvinsson at this stage leans closer towards being a project than a sure thing, but the potential to be a dominant force in the NHL is there.  Still, the comparisons to Victor Hedman are both premature and maybe a bit lazy since both are mobile Swedish defensemen with size. Although it’s not guaranteed he’ll ever reach Hedman’s Norris-caliber play, expect Edvinsson to follow a similar development track where it will take him five to six years to either hit a wall or reach his potential.