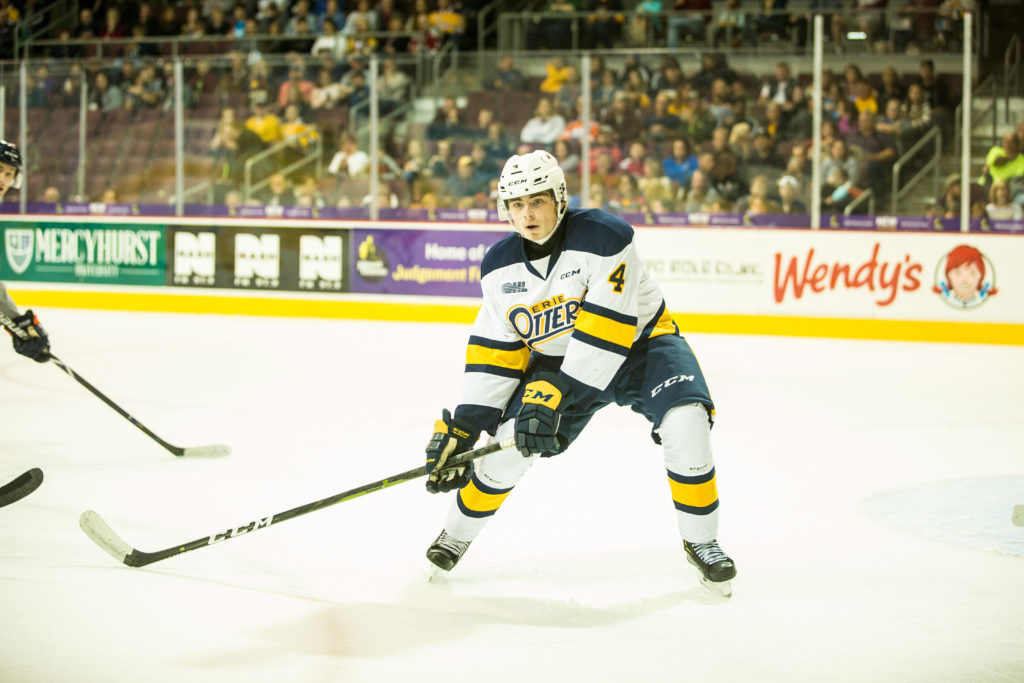 A pure puck mover who cooked up instant offense for a thin Erie attack, Drysdale’s quickness and shot proclivity were displayed at an elite level from the beginning of his draft season to the very end. He was a linchpin on the blue line for Canada at the Ivan Hlinka, and impressed London head coach Dale Hunter enough to give him a rare spot as a 17-year-old defenseman on the Canadian world junior team. Drysdale didn’t produce near-historic numbers in what turned out to be a 20+ year high in goals scored in the OHL. But his biggest contributions – takeaways from reads, clean breakouts, creating time and space – cannot be quantified in traditional stats.

Drysdale is a dominant presence on the ice who uses excellent speed, agility and rapid decision making to make himself the most dangerous player on the ice at all times. From a stylistic standpoint, there are several similarities between Drysdale and 2017 fourth-overall pick Cale Makar. Both are right shots who love the attack with speed and venture deep into opposing territory. Additionally, Drysdale is able to blend physical gifts such as quickness, escapability, and shot power with the natural instinct to time his movements perfectly and keep the other side in a state of confusion. Traveling at a high rate of speed can be a common trait of teenage offensive defensemen who are used to exploiting the inexperience of their opponents. But Drysdale is a poised, one-man breakout who processes multiple options as he darts up ice or weaves around traffic. Consider Drysdale one of the few draft-eligible puck rushers who consistently displays structure as he forays across center ice, but also produces more clean zone entries than needless dump-ins or turnovers.

A lot of Drysdale’s efforts rely on proper timing — timing of his lead passes; timing of his directional changes; and of course, timing of his reads without the puck. His desire to maintain the initiative and attack as often as possible keeps him positioned close to his line during 1-on-1 defense, and he confidently cheats in the neutral zone for an errant pass to intercept. On average, it seems like Drysdale personally initiates close to a half-dozen odd-man attacks per game. His lateral mobility is outstanding, so crossing up retreating defenders is an option he uses regularly.

Once inside the zone, Drysdale plays the role of possession facilitator. He’s been with Erie long enough for his teammates to understand the velocity, pinpoint accuracy, and unpredictability of his passes, to include cross-ice, banks, slap-passes, or backdoor feeds. By constantly staying in motion, Drysdale more than expands the ice in the offensive zone and setting up one-timers with a clear shooting lane to the net from either circle is a commonality for his forwards. He’s as natural a power-play quarterback as they come, and his shot-release combination is on the higher end of the elite scale. He whips accurate wristers from as far back as his own line, be he also walks the blue stripe with pump fakes before unloading a heavy slapper. One thing to keep an eye on is Drysdale’s trickery with point shots — not every attempt is intended to score, so forwards near the goal must be prepared for carom shots or floaters that are perfect for cross-body tip-ins.

On defense, Drysdale may not wallop opponents in open ice, but he’s well balanced and delivers very hard shoves that prove to be just as effective and are conducted without taking himself out of position. Drysdale plays close to his line and maintains a tight gap, using a shove or a stick thrust while chest-gazing his opponents all the way through. He definitely is a roamer, however, and rarely marries himself to slot duties — if Drysdale isn’t behind the net battling for possession, he’s charging at the points or chasing a puck-carrying forward while fixing him away from the scoring areas.

#OHL: Crisp cross-ice pass right on the tape from RHD Jamie Drysdale (Ranked No. 10) in Erie’s matinee with Guelph. pic.twitter.com/hemr3cBfEV