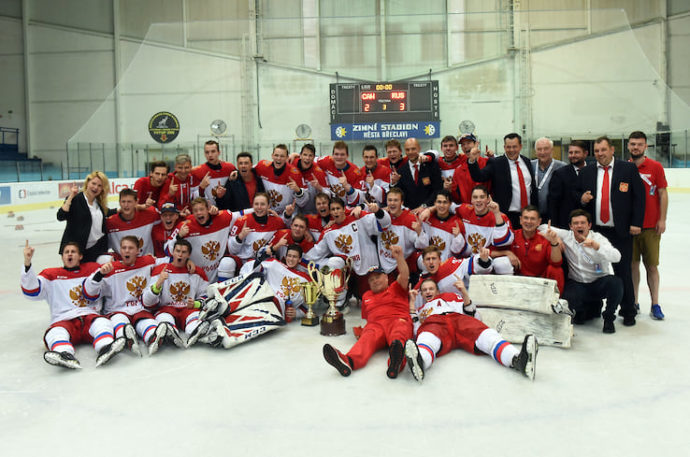 NASHVILLE (The Draft Analyst) — The intense weight of a decade’s worth of misses and disappointments for Team Russia at the under-18 level fell on the shoulders of their brightest goaltending prospect. And boy did Yaroslav Askarov deliver.

In the championship game of the annual Ivan Hlinka tournament — hockey’s premiere summer prospect showcase, hosted by the Czech Republic and Slovakia — Askarov made 35 saves as Russia survived Canada’s vaunted attack to claim a 3-2 victory for their first under-18 hockey title of any kind in over 12 years.

Expected to be the first goalie chosen in the 2020 NHL Draft, Askarov turned aside 13 shots in the final period, including a frantic sequence in the stages as Russia clung to leads of 2-1 and 3-2. Vasili Ponomaryov, also a prospect slated for the first round, broke a 1-1 deadlock with a wraparound goal midway through the second period, and linemate Alexander Pashin scored a critical insurance marker in the third for his second of the game.

But it was the confident netminding skills of Askarov that made stand up, thus securing Russia’s first gold medal at a major under-18 hockey tournament since 2007 IIHF world championship, and first Hlinka title since 1995, when the competition was named the Pacific Cup. Askarov came into the Hlinka already boasting a resume with multiple wins over elite programs, such as last year’s U.S. team that featured 2018 top pick Jack Hughes. Now he can add Team Canada to his growing hit list, as he stymied an attack that came into the title game outscoring their previous opponents 21-1 in the preliminary round and snuck past Sweden in a 3-2 shootout triumph in the semifinals. By delivering on his hurculean assignment of neutralizing one of Canada’s finest rosters in the history of their program, Askarov continues to improve a reputation and skill set that may see him go higher in the first round in the June draft. He finished the tournament with a sparkling 4-0-0 record with a 1.25 goals-against average and save percentage of .960, and stopped 119 shots in four games.

2020 NHL Draft prospect Cole Perfetti has scored at least once in every game of the Hlinka Gretzky Cup.@TheDraftAnalyst lists Perfetti as the fourth-best prospect looking ahead to next summer’s draft. pic.twitter.com/96orlFSOZa

#Hlinka: Fantastic balance/edgework shown by C Vasily Ponomaryov (Ranked No. 15). Alexander Pashnin getting all the love for his goal scoring, but Ponomaryov has been doing a lot of the heavy lifting. Strong compete level in all three zones.

#Hlinka: Just finished watching the USA-Sweden game, where the Swedes eliminated the Americans 5-4 in a shootout. USA were in total control, then a bad penalty up 3-1 early in the 3rd that shifted the momentum. This amazing goal by William Eklund tied it to force OT. pic.twitter.com/tRcoM2hXtV

#Hlinka: Great game between Sweden & Slovakia, with Swedes taking it 3-2. Lots of storylines — beginning with Sweden’s Leo Loof absolutely obliterating Samuel Knazko after the latter made a good read in the neutral zone. William Eklund & Erik Hedlund were excellent for Swedes. pic.twitter.com/0CjcUrg8ex

#Hlinka: Nice escapability and perseverance by Brandon C Ridly Greig (Ranked No. 44), who takes advantage of some timid defense to give Canada a 4-0 lead early in the 2nd. pic.twitter.com/7gDE4cL73z

#Hlinka: Soft hands displayed by Tolpar RW Alexander Pashnin (Ranked No. 82), who picks off a pass from Des Moines’ Noah Ellis and rifles one home. Russia cuts Team USA’s lead to 2-1 early in the 2nd pic.twitter.com/dzWbPIFRvy