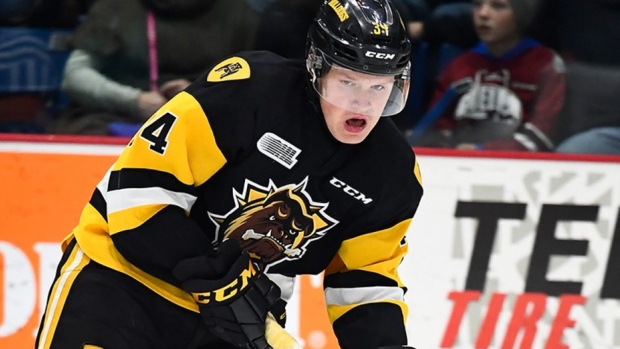 A goal-scoring winger with an excellent shot, Kaliyev was impressive last season as a rookie for the Hamilton Bulldogs, who won the OHL postseason title and nearly captured the Memorial Cup. His 30 goals were the most by any 16-year-old OHL’er since Alex Galchenyuk scored 31 for Sarnia in 2010-11. There are several aspects of Kaliyev’s game that stand out, namely his shot and ability to get open for clean looks at the net. He can finish in a variety of ways on both his forehand and backhand, and his one-timer from the circles is devastatingly accurate. Kaliyev’s ability to make quick bursts to the net from a static position creates a dilemma for defenders, since affording him too much room to shoot is equally as dangerous and playing him tight.

Although Kaliyev has a strong upper body and powerful leg drive, he isn’t a physically-intimidating power forward. He uses his above-average speed and stickhandling to quickly counter up ice and maintain possession while being harassed, but you wouldn’t classify him as a crease crasher. Kaliyev spends a significant amount of time away from puck battles but can hold him own in the corners. He has soft hands and is a very good passer for a sniper, and Kaliyev appears to develop immediate chemistry with any center or linemate. Kaliyev likely isn’t the first player a coach will summon to kill a penalty or suffocate an opponent’s late-period rally, but his goal scoring ability for a teenager most certainly is elite.

#AAPG: C Alex Turcotte (Ranked No. 3) slows it down, jukes a few times before sending a perfect pass to LW Arthur Kaliyev (Ranked No. 18), who blisters one past Dustin Wolf. pic.twitter.com/1rgP26zdka