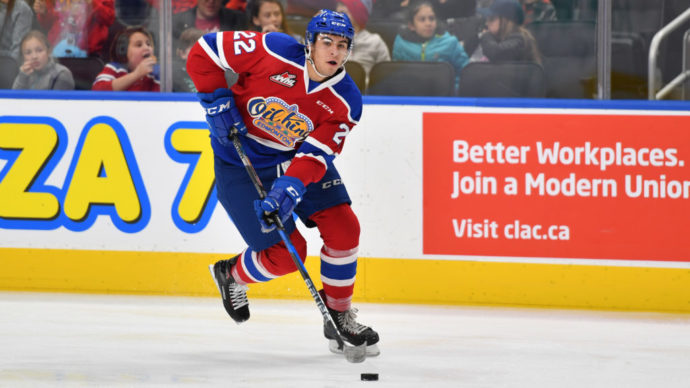 Strong and mobile two-way blue liner with a team-first attitude who handles both big minutes and big situations with maturity and confidence. Robertson is a throwback to the Western Canadian defensemen of old who were able to intimidate with physicality or their play with the puck. He’s clearly the top defender for the Oil Kings by the way he’s used at even strength and special teams, and how often Robertson is being summoned to address his coach’s concerns. His size, long reach and timing makes him close to impossible to beat one on one, and few teenage defensemen can force opponents into so many unsuccessful zone entries simply by standing up at the blue line. He’ll respect oncoming speed by giving himself more room, but Robertson’s long stick and strong upper body keep the majority of puck carriers to the outside. Robertson has soft hands and sharp hand-eye coordination that allows him to corral pass attempts cleanly and quickly transition from defense to offense. He’s not entirely married to the slot, but he keeps his head up and always looks for gaps to cover.

Robertson is a strong, powerful skater with average straight-line speed but enough agility and quickness to sharply change direction while maintaining control of the puck. He’s capable of taking it coast to coast and make plays well inside the opposing zone, but he’s smart enough to identify the proper time to release and cover up defensively. Robertson is an excellent passer both on his forehand and backhand, and his vision and the accuracy of almost all of his passes seems to afford him more time and space to make decisions than the average two-way defender. His shot certainly is an asset, both for its velocity and accuracy. Robertson has proven he can score from the circles with his wrist shot, but he keeps goalies honest by making occasional power moves to the net. He’s not fancy or some sort of elite playmaker, and rarely do you see him trying to do too much with the puck. Most of the scoring chances Robertson generates is from his point shot or crisp breakout passes.

#Hlinka: LHD Matthew Robertson (Ranked No. 19) of the @EdmOilKings gives Canada the lead in the 3rd with a beautiful shot just inside the top corner. pic.twitter.com/kZrwVGRIM4