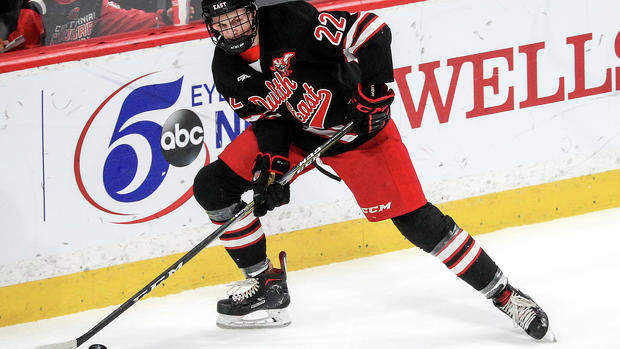 Towering forward with excellent speed who can play a variety of roles and is both likable and coachable. Donovan is the top draft prospect among American high schoolers and for good reason — he’s as good a finisher and he is a set-up man. Although he doesn’t play a bruising, menacing style, Donovan’s explosiveness when coupled with his size surely must create an intimidating sight for opponents. He plays on the top line and top power-play unit, and his vision and finishing ability helps him do a lot of damage close to the goal. Donovan has incredibly soft hands and he cleanly handles most passes he receives in full flight. He also can drop down a gear and slow things down, only to stutter step or change directions once he sees a defender leaning the wrong way. Donovan is very intelligent and anticipates extremely well, so his penchant for staying on the periphery and not engaging in every puck battle serves to his advantage since it ends up on his stick regardless.

Donovan’s shot is slightly above average and he seems to favor the wrist shot, but he own an excellent backhander and can roof the puck from in tight. He doesn’t shoot off the pass as much as he should, but he’s calculated with his decisions and will stickhandle or fake his way closer to the goal. Donovan can manage the puck effectively in all three zones and be counted to on to support his defenders and take the puck across center on his own. He pays attention to his side of center and is fast enough to fill gaps, but you wouldn’t classify him as a two-way forward. Donovan puts forth a consistent effort every shift and has all the makings of an elite power forward at the next level. He’s committed to play college hockey for Wisconsin.