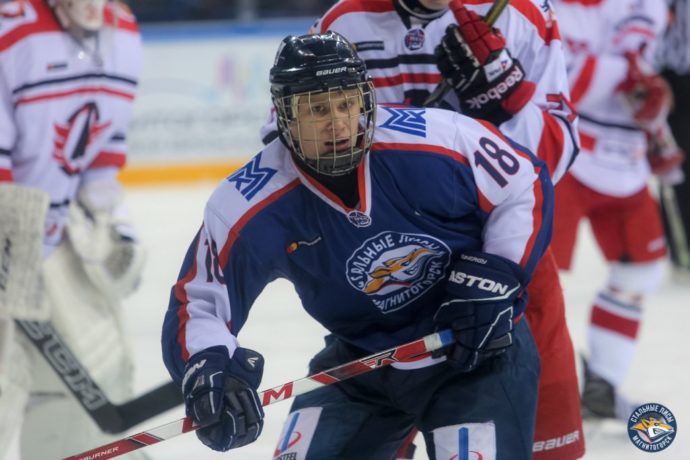 Sturdy two-way center with the reach of a giant octopus and a high compete level that makes him a difficult player to prepare for. Spiridonov is a natural center who began the season flanked by fellow 2019 draft prospects Dmitry Sheshin and Pavel Dorofeyv, and the trio clicked to the tune of two to three combined points per game. Both Dorofeyev and Spiridonov were ultimately promoted to Mettalurg for a trial by fire, simply because they proved to be to good for the MHL. Spiridonov, however, was the line’s driving force, using his size, reach and excellent anticipation to create havoc on the forecheck and during board battles. His straight-line speed is slightly above average and he has a short, wide stride, but he has shown to be able to pull away in open ice. His turns and pivots are sharp and he can move well laterally.

Spiridonov’s active stick comes in handy during the penalty kill, not only for consistently keeping it in lanes, but also for picking off passes and transitioning to attack mode. He is a very good passer, but his assists come more from hard work in the corners or mucking and grinding near the net rather than set-ups of the fancy variety. He also can finish from just about anywhere, especially with his snapshot or wrister, and occasionally plays the role of a net-front presence thanks to his ability to tip home shots well away from his body. Spiridonov is dominant on faceoffs in any zone, and he can be entrusted to support his defenders either below the circles, in the crease or behind the net. He has a strong upper body and can lean or one-arm shove opponents off balance, but he does so in a clean, disciplined manner.

#MHL: Outstanding effort while down a man by C Yegor Spiridonov (Ranked No. 21), whose hustle gets rewarded with a shorthanded goal in Stalnye Lisy’s 3-1 loss to Mamonty Yugry.

Love the fact that he chose to reengage rather than to go to the bench. pic.twitter.com/mQjG2aTARs