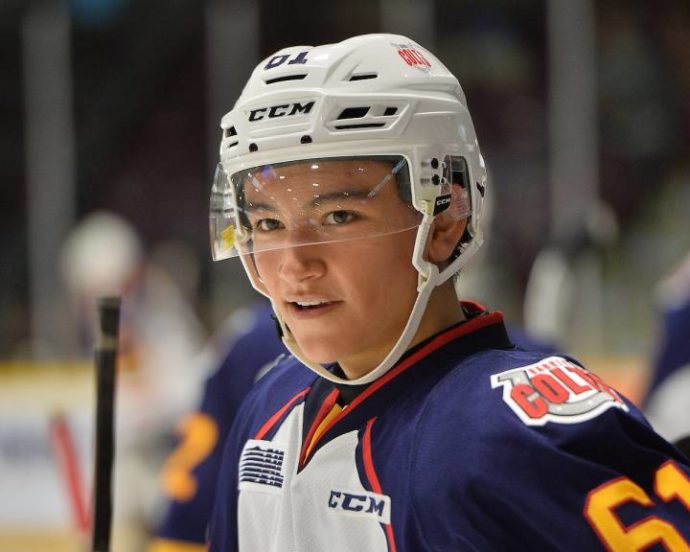 A dynamic offensive weapon with eyes in the back of his head and a top performer for both Barrie and Team Canada, Suzuki is the OHL’s top prospect for the 2019 NHL Draft. Blessed with blinding speed and acute hockey sense, the younger brother of 2017 first rounder Nick Suzuki is a bit more flashier and excitable with the puck, especially in open ice. He’s more of a playmaker than a shooter, but Ryan owns an excellent wrist shot and can score off his backhand. Still, he seems more comfortable and confident dictating play with the puck on his stick and treating every teammate as a scoring-chance possibility. Suzuki a season ago was one of the OHL’s top rookies, but he enters his draft year as one of the circuit’s best overall players and a candidate to challenge for the scoring crown.

Suzuki has excellent vision and will connect with a linemate from just about anywhere, regardless of how dense the network of skates, bodies and sticks are clogging a passing lane. He has a soft touch and feathers passes with regularity, but he also can whip the puck around with both accuracy and authority. Although Suzuki is an excellent stickhandler with elusiveness and agility to avoid contact, the puck doesn’t spend a lot of time on his stick at even strength. He’s usually on the periphery during puck battles and the corners, and you will rarely see him engage in physical play. Nonetheless, Suzuki is an effective penalty killer and aggressive forechecker whose positioning, quick stick and awareness forces turnovers in the opposing end. He is capable of turning seemingly harmless plays into quality scoring chances.