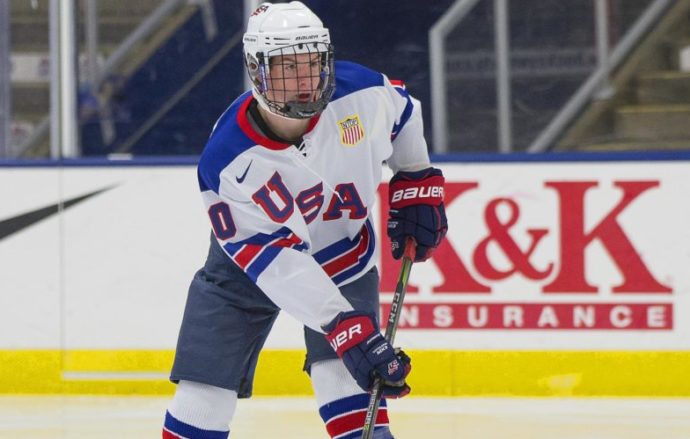 A clean and clever two-way defenseman who can skate himself out of a jam in any zone at any point in the game. Helleson is the most reliable puck manager on a very talented NTDP blue line and is capable of maintaining control while being tightly checked or double teamed. He plays in all situations, and he is most effective when he is orchestrating a lengthy possession inside the opposing zone. Helleson does not play like he hungers for his name on the stat sheet — he’s an unselfish rearguard who is comfortable distributing the puck, and one who involves himself in the play as much as possible. Helleson has an average shot but his accuracy is excellent. He is a threat to make a quick dash or fake to the slot and wire a shot through traffic, but he also owns a hard backhander that he can roof with authority.

Helleson is an strong one-on-one defender with quick closing speed and an active stick. He stands up at the blue line and makes reads that lead to counterattacks or odd-man rushes, but he also knows when to retreat and assume his duties near the goal. Helleson seems to have an advanced understanding of his slot duties and stays vigilant no matter the puck’s location in his own end. He will vacate on occasion, and although he isn’t overly physical, Helleson will put forth a ferocious effort while battling in front.

A smooth regroup from the U18 defense and zone entry from Sean Farrell set up the 2nd #USANTDP goal. Farrell drops to Cole Caufield and he makes a pair of moves before finding a streaking Drew Helleson above the circles. pic.twitter.com/yp3s3HkrpY