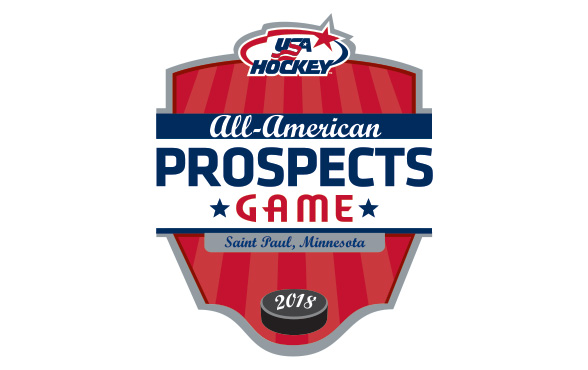 NASHVILLE (The Draft Analyst) — The seventh annual All-American Prospects Game returns to Minnesota tonight, as the top American-born hopefuls for the 2019 NHL Draft get together for one of the most important prospect showcases of their pre-draft season. Forty two player representing 18 states will be split between two teams to be coached by a pair of Minnesota-born NHL veterans — Team Jamie Langenbrunner and Team Jordan Leopold.

Headlining the event will be consensus top prospect Jack Hughes (Ranked No. 1), a speedy center who is one of 20 players from the U.S. National Team Development Program. Hughes is expected to center Team Leopold’s top line, while two additional top-rated NTDP centers prospects — Alex Turcotte (Ranked No. 3) and Trevor Zegras — will anchor the top two lines for Team Langenbrunner. Ten of the top-31 draft prospects in thedraftanalyst.com’s latest rankings will particiapte in tonught’s contest, including smooth-skating NTDP defenseman Drew Helleson (Ranked No. 16) and power winger Arthur Kaliyev (Ranked No. 18), who plays for the Hamilton Bulldogs and could be the first OHL player drafted next June. In goal, Team Langenbrunner has towering netminder Spencer Knight (Ranked No. 86), while phenom Dustin Wolf (Ranked No. 108) of the WHL’s Everett Silvertips will backstop Team Leopold.

Here are the projected lineups for tonight’s seventh annual #AAPG!

Reviewing Marc Bergevin's tenure as GM.
Setting up a new era under Jeff Gorton.
Spoke with Glen Sather about Gorton.
Spoke with Trevor Timmins, who was fired for the first time in his hockey life.
On what led to a huge shift in the front office, and where #Habs go from here: https://twitter.com/Sportsnet/status/1465153077103763463

So I guess the U18 NTDP manhandled the Chicago Steel for a second time. About to watch Sunday's game but I already posted the Logan Cooley profile and the kid had another huge game against a tough opponent. It's now a five-game goal streak that began at the 5 Nations

Maple Leafs finished November with an 12-2-0 mark, with wins over Vegas, Tampa, Boston, Calgary, the Rangers, and Anaheim tonight. Toronto is now tied with Washington for first overall.