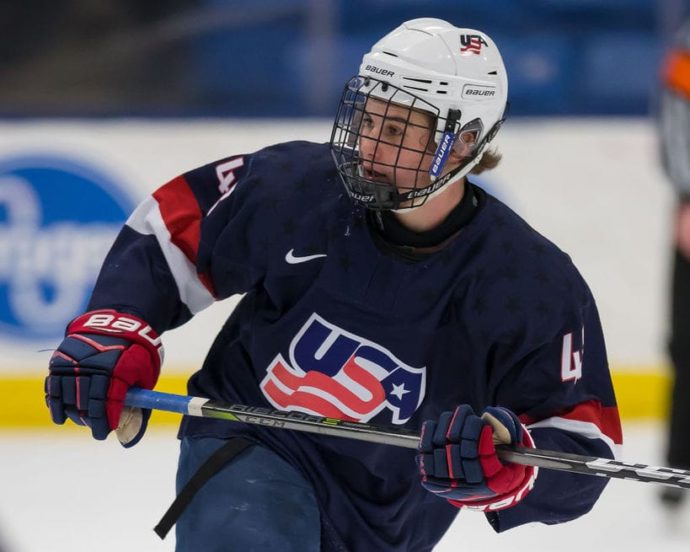 Turbo-charged center with blinding speed and fantastic vision who has dominated his peers at every level. Hughes’ skill is noticeable from the second he hits the ice, but his ability to make every single one of decisions seem calculated is what separates him from a very talented group of draft-eligible forwards. His sixth sense allows him to sniff out trouble before it’s within striking distance while simultaneously identifying weaknesses within the opponent’s scheme to stop him. It’s cliche to say he makes everyone around him better, but Hughes does so in more ways that one.

For starters, Hughes is an excellent playmaker with hawk-like vision who can perfectly time passes to linemates over long distances, especially off the rush. He uses a variety of head fakes, stutter steps and quick pivots to lure defenders away from a passing lane, and he can no-look pass better than any junior-aged player since Connor McDavid. But Hughes isn’t just a pass-first center, as he uses his blazing speed, agility and elite stickhandling to make inside moves towards the goal with regularity. Once he’s there, he’ll either wire a blistering wrister or use his ridiculously soft hands to roof shots from in close on either his forehand or backhand. These traits not only expand the ice for his teammates, but also seem to wear down defenders as they work feverishly towards trying to contain him.

Hughes’ elusiveness helps makes up for a lack of upper-body strength, and he’s more of a digger than a pusher during board battles. He also likes to handle the puck a lot and for as long as he can, thus leading to the occasional unforced error or 1-against-4 dangle attempt. Neither, however, should be considered weaknesses of any significance, and Hughes should be expected to enter the 2019 draft and the clear-cut favorite to be the first overall pick en route to sure stardom at the NHL level.

#NTDP: It’s just one clip, but it encompasses why I have RHD Bode Wilde (Ranked No. 14) and LW Joel Farabee (Ranked No. 7) as high up as I have them.