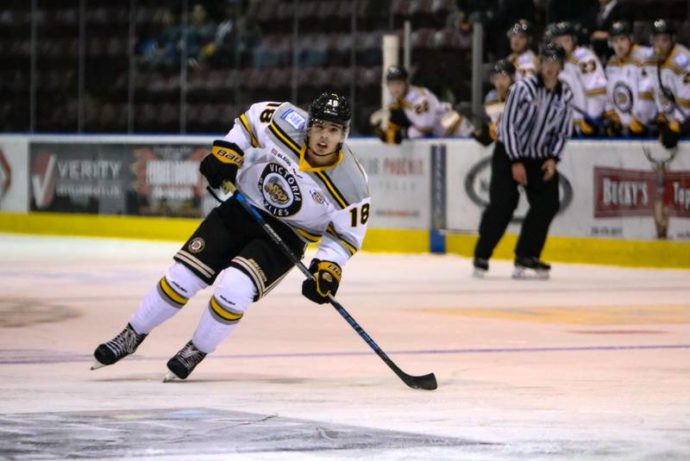 Gifted offensive force with blinding speed, an advanced brain and phenomenal puck skills who was named the BCHL’s Rookie of the Year after notching 66 points in only 45 games. A Maritimer who chose to keep his NCAA eligibility rather than play major junior, Newhook is the prize of yet another outstanding recruiting class for Boston College’s Jerry York. Newhook is a natural center who is quick, decisive and deadly in open ice. He always has played on a top line and top power-play unit, and watching him stickhandle around defenders with ease reveals an adversary opposing coaches are definitely fearful of. His 102 points were tops in the league and he was the youngest BCHL scoring champion since Scott Gomez did it in 1996-97.

Newhook is a fast, determined skater with exceptional balance and agility. He can beat you inside or out, and you can count on him causing at least one defenseman per game to blow a tire. His combination of speed and puck control makes him lethal off the rush, but he also makes the right reads and is able to exploit an overloaded side or confusion in coverage. Newhook has super-soft hands and is a threat to score from just about anywhere, and his shots off the pass are either labeled or deny the chance for the goalie to control the rebound. He can also play physical and doesn’t get intimidated by bigger, stronger players.  One area of Newhook’s game that sets him apart from most draft prospects is his ability to create instant offense off of faceoffs. Newhook has superstar potential thanks to off-the-charts hockey sense with the sublime skill to match it. The concerns about his marginal play in prospect showcases like the Hlinka camp, WJAC and CJHL Top Prospects Games raise legitimate concerns about his ability to elevate his play against superior competition.

#BCHL: This was from earlier in the game. Nice rush by LHD Carter Berger (2019/1999) but look at the vision, confidence and accuracy by Alex Newhook from the other side of the ice, and through traffic no less. Goal was scored by LW Cameron Thompson (1998). pic.twitter.com/YHDmGA8gM3