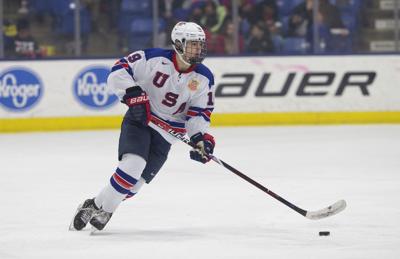 Powerful center with excellent playmaking abilities and game-changing speed who has the potential to become a top-line pivot in the NHL. Turcotte, who’s father Alfie was a first-round pick of the Montreal Canadiens in 1983, was a key contributor for both the NTDP’s under-17 and under-18 programs, including a midseason promotion to the latter where he produced 16 points in 19 games in a limited role. Turcotte is a low-maintenance center in that he can excel in both optimal and non-optimal conditions, plus handle physicality better than most offensive forwards. He is a fast, agile skater with a wide, powerful stride and the balance of a seasoned NHL power forward. Getting knocked off the puck while he’s either static or moving is something you rarely see.

Turcotte possesses superior vision and passing ability, and it’s clear from his first shift that he understands the game’s intricacies and nuances that require a center to develop chemistry with his linemates. He plays smart hockey with his head on a swivel and attacks with decisiveness, maintaining situational awareness no matter how fast he’s motoring up ice. Turcotte is one of the few draft-eligible forwards who can time his passes with precision while moving as fast as he can. Although he seems to like to defer to the pass, Turcotte owns a hard, accurate wrist shot with a quick release, and he’s proven to snap off high-velocity shots within tight windows.

#NTDP: Jack Hughes (Ranked No. 1) scored twice in his return as the 18’s crushed Adrian College 8-3. Alex Turcotte (Ranked No. 6) and Matt Boldy (Ranked No. 7) each had a goal and three assists.

Check out this Turcotte move and dish to Pat Moynihan (Ranked No. 156) pic.twitter.com/ooos723DjN