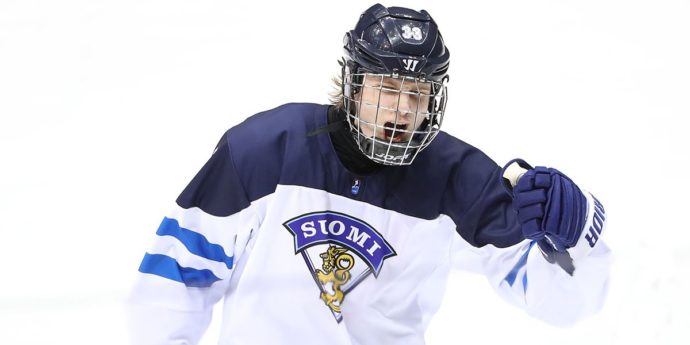 Multi-tooled winger with size and coordination who incorporates his impressive puck skills with a desirable physical package that consistently exhausts opponents. Kakko was impressive last season as a 16-year-old depth player for TPS, and this year was even better — his 22 goals broke Aleksander Barkov’s SM-Liiga record for first-year draft eligibles. Blessed with incredibly soft hands and tight-quarter quickness, Kakko is a reliable stickhandler who uses timing plays to either get open or create space for his linemates. It’s hard to call a bigger winger elusive, but Kakko’s shiftiness is both rapid and unpredictable — he constantly lures defenders into a compromising position before exploiting the smallest of windows into an unabated path to the goal. He also can serve as a net-front presence on the power play, but also alternates to the far-side circle for a one-timer or backdoor slam dunk.

Kakko is mature, poised and displays high intelligence with or without the puck. He constantly is in motion and uses his strength to win physical battles or get inside positioning on opponents. Kakko uses a variety of moves and fakes to get himself into shooting position, but he doesn’t not require optimal conditions to wire off a blistering, accurate shot that is labeled for the corner or far post. Although he may one day be classified as a power forward, Kakko is more competitive than he is physically intimidating, and his work in corners and in front of the net delivers positive results far more often than a broken play or unforced error. He owns a wide stride and his straight-line speed is above-average for a big winger. But he is agile, well balanced, nimble and he can beat defenders either inside or out. Kappo’s endurance is excellent during the first half of his shifts, but like most larger forwards, he can run out of gas in the middle of a play.

#U20: Liked both Kakko and Honka all game. Granted, it was a blowout exhibition camp in the summer, but saw positives nonetheless.

Here’s an example of the amount of mustard Kakko gets on his shot. Even last year, these bad-angle shots created rebounds in front. pic.twitter.com/99XanV6fES