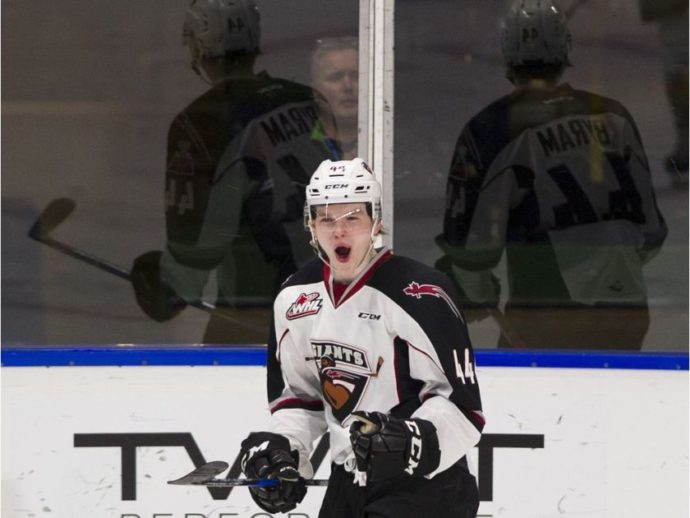 Calculated two-way defenseman with leadership traits and cornerstone potential who makes the proper reads while carrying an on-ice demeanor similar to that of a seasoned veteran. Byram was the CHL’s top goal scorer among defenseman in the regular season, and became the first blueliner in WHL history to lead the playoffs in scoring. Byram was absolutely critical in leading Vancouver to within one goal of the Memorial Cup in a thrilling seven-game WHL Finals against favored Prince Albert, an opponents who saw Byram log anywhere from 30-40 minutes a game.

Byram has excellent mobility and always looks to either join the rush or create a breakout by himself, and he makes difficult plays while handling the puck look easy. Byram uses flip, chip, bank or stretch passes to trap forecheckers, and he’s capable of dishing the puck with accuracy and authority while backskating or off balance. He consistently keeps his feet moving and reacts to the puck’s changing direction with quickness and confidence. Byram is a strong stickhandler who protects the puck extremely well, especially in instances when he skates methodically into traffic in the neutral zone. He’s an upright skater with a powerful stride with both lateral quickness and rapid directional changes. Byram can run the power play from the left point or the top of the umbrella and owns a devastating slap shot that is accurate, creates rebounds and requires little backswing to achieve significant velocity.

Defensively, Byram displays quick feet in maintaining a tight gap, even if a quicker opponent tries to shift gears on him. His stick is highly active and poke checks are timed without putting him at risk of getting caught flat footed. He likes to stand up at his own blue line; either to strip the puck or deliver a hard check. Byram gan be guilty of puck gazing or wandering far from his slot duties, but both are part in parcel of his desire to transition up ice in attack mode. He plays with a lot of emotion and likes to get involved in physical battles, plus give the occasional stinky glove to the mug of an unsuspecting opponent.

Canada will face the U.S. in one semifinal on Friday, and the Swedes take on Russia. pic.twitter.com/OAueRzfNVj