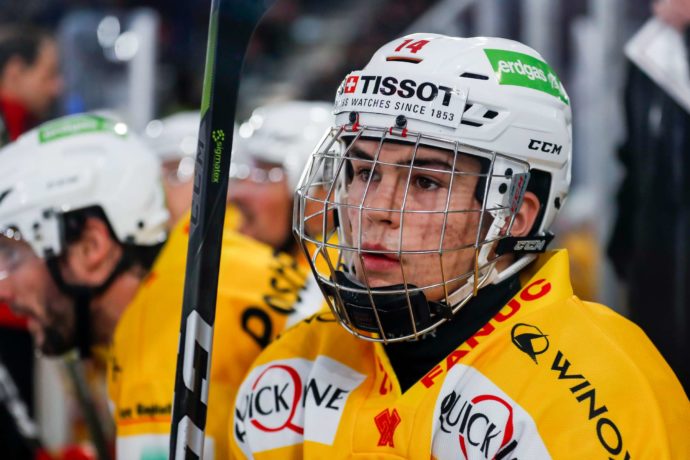 Hard-working center with a high compete level who plays smart hockey in addition to being a skilled, offensive weapon. Nussbaumer is considered the cream of the Swiss prospect pool after proving worthy against both international and junior league competitors, and he’ll be making his North American debut this Fall when he suits up for the QMJHL’s Shawinigan Cataractes. Nussbaumer is a strong skater with above-average speed whose game is predicated on staying in constant motion with or without the puck, and his smart positioning plays a key role in his ability to turn opposing turnovers into immediate counterstrikes. He can play either a physical or finesse game, and he’s at his best when controlling the puck in tight quarters and  wearing down opponents with sharp pivots or puck protection.

Nussbaumer is a natural center but he spent time as a winger in the elite Swiss NLA. He owns an excellent shot with a quick release, but he’s got soft enough hands to pull out a fake or two in front of the goal before roofing one under the crossbar. He has excellent vision and will connect with the option that either will carry the puck into the opposing zone, or has the cleanest look at the net. Nussbaumer likes to keep his feet moving inside the defensive zone and can be counted on to drop below the circles to help out his defensemen. He may not blow you way with a specific skill or aspect of his game, but Nussbaumer is a complete player who can be used in any situation.

#WJC: Swiss tie it after a lucky bounce ends up on stick of 2019 draft prospect Valentin Nussbaumer. 2-2 in the 3rd. pic.twitter.com/gC0IWEysAl