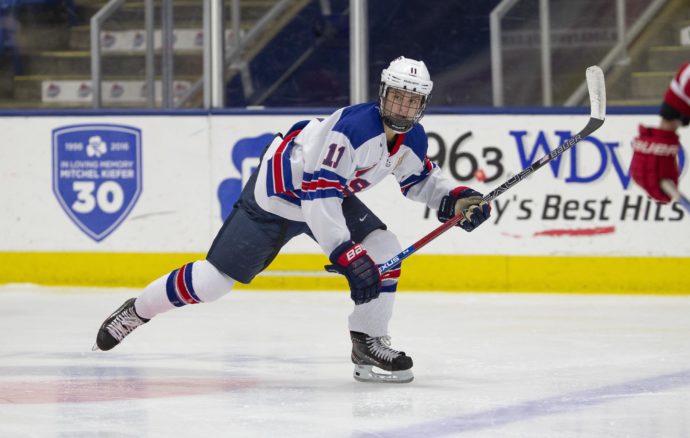 Slick playmaking center with exceptional hockey sense who last year took over the NTDP’s top line after Jack Hughes and Alex Turcotte were promoted, and spent a good chunk of this season as a left wing. Zegras, who is committed to Boston University, is very dangerous with the puck and appears quite comfortable handling the responsibilities inherent in leading a talented squad’s offense. He is both crafty and fancy with the puck, and his passes almost always are on the tape with authority. Zegras’s pass accuracy remains consistent anywhere on the ice and he’s just as dangerous threading the needle while manning the half wall as he is in open ice. His ability to stickhandle while keeping his head up allows him to be the first to identify trailers or back-door cutters, and Zegras will use no-look centering passes on the power play to exploit an open passing lane. He’s also capable of tricking goalies with a hard, accurate shot that he can tuck under the bar from bad angles.

Zegras plays engaged with or without the puck and stays in motion in all three zones. He locks in on the puck regardless of where it is or whether or not he’s in control. Once he’s corralled it, Zegras can use a variety of stutter steps, gear changes or pirouettes to motor past, around or through traffic. His agility is outstanding, and he always seems to make the right reads when anticipating puck travel. Zegras is a strong, agile skater with very good straight-line speed who can stay low to the ice and maintain his elite balance as he zips through the neutral zone into opposing territory. His zone entries are surgical and designed to create time and space while maintaining possession. He is very good on faceoffs and will play physical along the boards. Zegras also has a mean streak and will get involved in scrums after the whistle.

#U18: Happy Greek Easter to Trevor Zegras (Ranked No. 4) who flashes his skill with a neat pass to Cam York for an absolute laser. USA puts Canada away with a PPG that makes it 5-1 late in the 3rd.

York leads all defenseman with 4-8-12, while Zegras has 9 assists#ΧριστόςΑνέστη pic.twitter.com/GxyehVpEwf