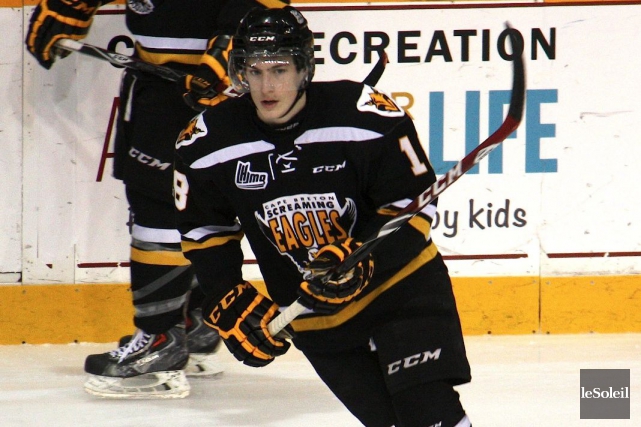 Position: Center/Left Wing
Shoots: Left
Height/Weight: 6’2 201 lbs
Born: June 24, 1998, Ste-Agathe-des-Monts, QC
Obtained: Selected in the 1st round (5th overall) by Cape Breton in the 2014 QMJHL Entry Draft
Notes: 2015-16: Finished third in QMJHL scoring with 99 points in 62 games…Placed in the top-10 with 42 goals (5th), 57 assists (6th), a plus-40 (T-5th) and was 12th with 112 penalty minutes…Won 50.4 percent of his faceoffs…Scored a goal and added two assists for Team Orr in their 3-2 win over Team Cherry at the CHL Top Prospects Game on 1/29/16…Tallied a career-high five points (3g, 2a) in a 6-4 win over Halifax on 12/29/15…Was invited to Team Canada’s World Junior Hockey Championship camp but was one of the first cuts…Played in both games for Team QMJHL in the 2015 CHL Super Series against Russia…Registered two goals and three assists in five games to help Canada win the 2015 U18 Ivan Hlinka Memorial Cup…2014-15: Finished ninth in scoring among QMJHL rookies with 10 goals and 35 assists in 54 games…Had two goals and an assist in five games for Team Canada-Black at 2014 World U17 Hockey Challenge.

Dubois profiles as a high-end power forward with the ability to succeed at either center or wing. A skillful tower of strength in the mold of Jamie Benn or Patrick Marleau, Dubois is a mature specimen who combines God-given physical talents with a sort of sixth sense rarely seen in a teenage prospect. He’s tough to play against on or off the puck, and uses a wide stance and long wingspan to keep the puck nestled within an impregnable zone of protection. Dubois has a long stride and reaches top speed quickly for a forward already above 200 pounds before his 18th birthday. He is a tough out in one-on-one situations, and changes gears fast enough to leave the smartest of positional defenders behind him. His pro shot and quick release are just part of the myriad of ways he can beat you. All that said, his hockey sense and ability to process plays in a nanosecond helps vault him to the upper tier of a very talented group of draft-eligible power forwards.

Dubois, who plays center with aplomb, can be used in all situations regardless of how much time is on the clock, or what the scoreboard reads. He wins draws cleanly then positions himself properly immediately thereafter. Dubois does so many things exceptionally well, and playing with menace and snarl evokes memories of hockey’s heroic warriors of the 1960’s or 1970’s. A real leader with elite offensive skills and off-the-charts intangibles, Dubois comes across as the perfect specimen who we feel is less than a year away from the rigors of the NHL. Being a gym rat does have its drawbacks, however, as he seems to forget how strong he is. Dubois shows an occasional lack of discipline and has to learn how to play within the rules.