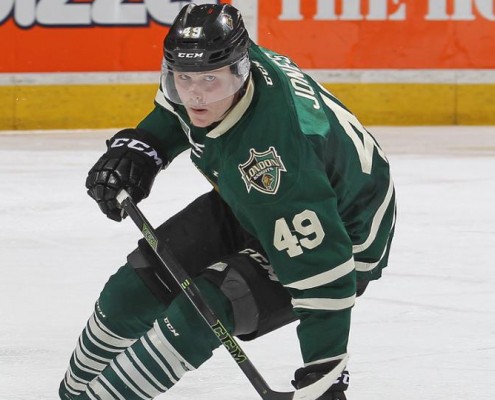 Position: Left Wing
Shoots: Left
Height/Weight: 6’3 205 lbs
Born: February 17, 1998, Orion, MI
The Draft Analyst Ranking: 23rd (February)
Obtained: Selected in the 1st round (18th overall) by London in the 2014 OHL Priority Selection
Notes: 2015-16: Tied for third among OHL rookies with 22 goals in 54 games…Registered five goals and five assists during a seven game point streak while London’s top players participated in the World Junior Championship…His 94 PIM’s through February 27th are the most by an OHL rookie and 11th overall…Ranks fourth among OHL rookies with 93 shots on goal…Tallied only five points (2g, 3a) in 17 games between January 19th and February 27th…Notched an assist for Team Cherry at the 2016 CHL Top Prospects Game…Scored two goals and was a plus-3 for Team Plante at the 2015 CCM/USA Hockey All-American Prospects Game in September…2014-15: Placed third on the U.S. NTDP Under-17 team with 18 goals in 38 games…Tied for team lead with seven power-play goals and was second with five game-winning tallies…served a team-high 189 penalty minutes…Tied for team lead with a pair of goals in four games at the 2015 U17 Five Nations Tournament in Russia…Led the 2015 World U17 Hockey Challenge with seven goals in and 11 points in six games as Team USA earned a silver medal…Father is former NHL’er Brad Jones, who appeared in 148 games for Philadelphia, Winnipeg and Los Angeles.

Jones is a big, strong two-way power forward with a goal scorer’s acumen who can reach top speed in a hurry. If there’s one 2016 draft prospect who skates angry but manages to look graceful in the process, it’s definitely Max, the son of former NHL’er Brad Jones. He is quite agile, using solid footwork and a decent first step (for a power forward) to catch defenders flat footed. His anticipation skills are fairly strong, as he knows his long reach allows him to loiter near his own blue line without giving away much in positioning. If he intercepts a cross-ice pass, forget it…it’s off to the races with little to do about it. He can shift gears and change direction, making him difficult to defend in one-on-one or two-on-two situations…From a physical standpoint, Jones does not get cheated, as he uses all 75 inches and 200-plus pounds to wear down opponents along the boards, with the occasional butt end, slash or knee to keep them honest. He’s tough to out-muscle, and his overall strength is equally distributed between his upper and lower body. Jones has a pretty big wind up for his hard shot, but he’s shown to get velocity on his wrister without much backswing.

He’s been durable for the Knights this season, and it was Jones who took the reins and dominated the OHL’s landscape while its top players were busily shining in Helsinki at the World Juniors. He oozes some serious top-line upside, but he can go through long periods without producing, albeit not from a lack of effort. It may be a few more years until Jones can harness his natural-born talents and marry them with a complete understanding of the game’s intricacies, but for now, he’s should be considered an unbridled thoroughbred who is a good mentor or two away from being one of the game’s best within the power forward genre.