Photo courtesy of the University of Wisconsin Athletics 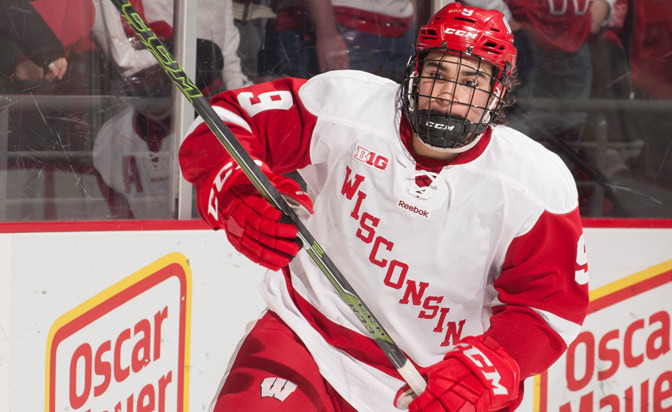 Position: Center/Left Wing
Shoots: Right
Height/Weight: 6’0 193 lbs
Born: December 4th, 1998, Chesterfield, MO
The Draft Analyst Ranking: 15th
Obtained: Committed to the University of Wisconsin on May 24th, 2013
Notes: 2015-16: Leads the Badgers through March 1st with 15 goals in 29 games, on pace to become the first Badgers freshman since Dany Heatley in 2000 to lead the team in goals…Is fourth among all Big-10 skaters with 10 goals in conference play…Ranks first on the team in shots (108)…Recorded a team-best 11 shots in a 4-1 loss to Penn State on January 16th – the highest single-game total by a Badgers’ freshman in 10 years…His four-point game on January 9th was the first by a freshman since Kyle Turris in 2007…Led Team Roenick at the 2015 CCM/USA Hockey All-American Prospects Game with two goals and an assist…2014-15: Tied for fifth on U.S. NTDP Under-18 team with 27 goals in 61 games…Captained Team USA at U18 World Championship, where he scored six goals and won the gold medal…Scored a goal and added two assists as Team USA finished second at the U18 Five Nations Tournament in the Czech Republic…Potted two goals and added an assist to help Team USA win the Four Nations Tournament in Sweden…2013-14: Placed third on Team USA’s Under-17 team with 20 goals in 52 games…Notched six points in six games as Team USA won the 2014 World U17 Hockey Challenge…Selected by the Sarnia Sting in the 12th round (229th overall) of the 2013 OHL Priority Selection.

Figuring out which 2016 draft prospects will have the honor of being called first round picks may not be as tough as in previous years. But Wisconsin forward Luke Kunin, the sharpshooting St. Louis product who flew somewhat under the radar while playing two seasons for the NTDP, is a virtual lock to get his named called on the draft’s opening night.

An honest, clean player with very good speed and strength, Kunin is natural goal scorer, blessed with a laser of a shot and excellent instincts. He was unstoppable at last year’s U18 World Championships, scoring six goals in seven games without the benefit of playing on the top line. He’s been just as prolific as a freshman for the rebuilding Badgers, who entrusted him with top line duties. He’s taken advantage of the NCAA schedule by hitting the weights, and you can tell by the way he’s been plastering collegiate opponents. Kunin is an excellent skater who is always looking for his shot – a process which doesn’t take a lot of time to bear results. Wisconsin coach Mike Eaves has raved about his maturity and leadership, and the fact that Kunin continues to improve while fighting Type 1 Diabetes tells us there’s more to his game than just scoring.