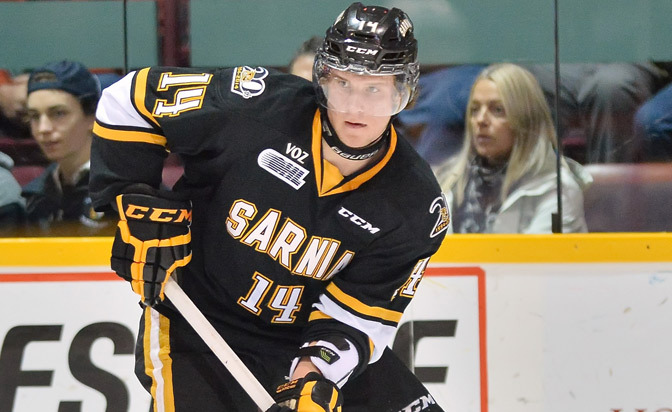 Zacha’s numbers as an OHL rookie may not be eye popping in comparison to others in his draft class. But that’s because he wasn’t on the ice enough to make them look gaudy. Make no mistake; Zacha is a man child. He may not have had the breakthrough season many expected after Sarnia made him the first overall pick in the import draft, but when he did play, he certainly made his mark on the OHL. A strong center with a variety ways to beat you, Zacha’s at his best when he’s unbridled in open ice and exploding up the ice as if he was shot out of a howitzer. He’s a devastating hitter who toes that line between acceptable and dirty. His physicality coupled with his speed are reasons why the seas in the offensive zone seem to part whenever he has the puck. Zacha possesses an excellent shot and an even better release, and his one-timer is devastatingly accurate. He is very good at exiting his own end and entering the other. While he shouldn’t be categorized as a selfish player, Zacha tends to hold onto the puck longer than he should. Chalk it up to youth and overconfidence. Regardless, he’s built to sustain the rigors of the NHL almost immediately.