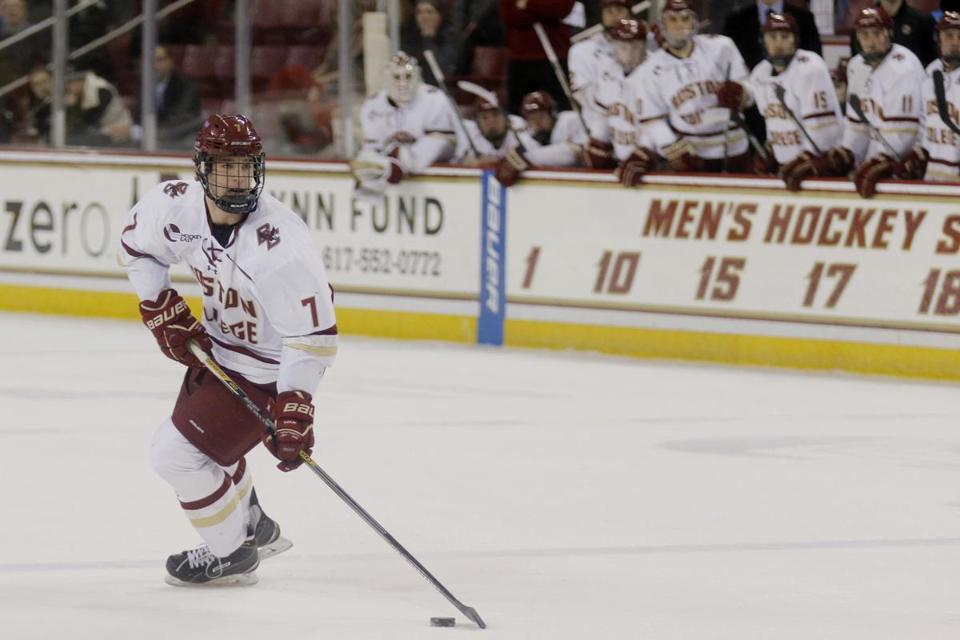 Name: Noah Hanifin
Position: Defense
Shoots: Left
Height/Weight: 6’3″ 205 lbs
Born: June 23, 1997, Norwood, MA
Obtained: Signed Letter of Intent to Boston College, 10/25/11
Central Scouting Rankings (Prelim/Mid/Final): “A” / 3rd NA / 3rd NA
Notes: Drafted by the Quebec Remparts in the 2013 QMJHL Entry Draft (2nd round, 26th overall)…Tied for 2nd among 106 freshman defenseman in assists (18), and finished third in points (23)…Points-per-game doubled from 0.41 to 0.80 from Jan. 1st to season’s end…His 0.94 PPG in conference play from the start of the new year was 8th best among all NCAA DIV-I defensemen…Posted two assists and was a +3 in five games played for Team USA at the 2015 World Junior Championship…Won gold at both the 2014 IIHF World U-18 Championship and 2014 World U-17 Hockey Challenge, where he combined for eight points (two goals, six assists) in 13 games.

SCOUTING REPORT
I’m going to get on a soap box for a moment: Alexandre Daigle, the consensus and eventual top pick in the 1993 NHL Entry Draft, ominously boasted after his selection that “I wanted to be No. 1. Nobody remembers who (the second overall pick) was.” The guy picked immediately after Daigle was Chris Pronger. With all the talk about Connor Mcdavid and Jack Eichel, Hanifin, much like Pronger in 1993, is viewed as some sort of consolation prize. Regardless of how McDavid’s or Eichel’s respective careers turn out, history should be very kind to Hanifin,  who some consider the best draft eligible American-trained defenseman in decades. Hanifin is an outstanding two-way defenseman. Forget about how he was supposed to be a senior in high school rather than patrolling a blue line against grown men. Forget about how in true Jerry York fashion, Hanifin was held back in a lesser role for half a season. Lastly, forget about how Boston College had its lowest offensive output since before the Great Depression (the American one, not the Harold Ballard one). When you look at Hanifin from a purely individual standpoint, he’s top notch in so many areas. He is a tremendous skater forward and back, and possesses a long reach. This makes him difficult to beat one-on-one or in odd-man situations. Thus, his gap control is impeccable for anyone, let alone a teenager, and rarely does he resort to hooks and grabs. What makes him dangerous is when he takes these shutdown abilities and combines it with his superior IQ; at the blink of an eye, he’s stripped the puck clean and transitions the other way. Hanifin is a hard and accurate passer, especially across/up the ice,  but he is also adept at beating pressure with a simple chip or ladle. He’s got great hands for a guy his size, specifically on the power play when he’s receiving hard cross-ice passes on either his backhand or forehand. He has an average shot, but it’s accurate and keeps it low. From a physical standpoint, Hanifin is big, but his physical play is part of a process rather than a reaction. He has delivered big hits and can clear the crease, but not at the cost of positioning. He’s already a 200-pounder, so even if he gets bigger, it should not impact his mobility (think Al Iafrate, Kevin Hatcher, Scott Stevens and the seemingly hundreds of other former Capitals defensemen who were big and could skate). He’s a very humble kid who is receptive to change and doesn’t rock the boat. Should be groomed for leadership role at an early age. Bottom line: Franchise-type cornerstone No. 1 defenseman everybody wants.