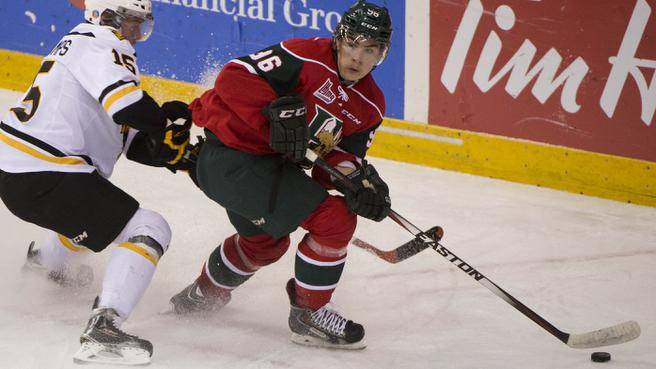 Never has there been so much talk about drafting for immediate need the way teams used to with the star-studded drafts of the 1980’s. Times are tough. Money talks, and its making the cap unpredictable, to the point where some are thinking it might go in reverse instead of up. It is with that in mind that the depth of the heralded 2015 draft becomes a factor thanks to a talent injection of NHL-ready power forwards. As many as four (Lawson Crouse, Mikko Rantanen, Pavel Zacha and Timo Meier) could not only become top-10 picks, but also don an NHL jersey for a living come October. The most interesting of the four is certainly Meier, who in a short period went from being considered near the bottom of the best to a star in the making. He’s a tremendous, well-built athlete who is a bit of a throwback. Meier is a gifted goal scorer; a no-nonsense shooter with a pro release. What makes him enticing as a prospect is the way he combines a goal-scorer’s touch with calculated physicality. He’s been likened to a wrecking ball on skates for the way throws his weight around and delivers punishing hits; his powerful stride and ability to pick up speed while bearing down on a prospective target makes it difficult for opponents to complete plays. He has very good hands and vision, and can quickly determine when the window to drive to the net for a quality chance has closed. That doesn’t necessarily mean it will stop him, as Meier can angle into a defender and establish positioning while controlling the puck en route to the toughest scoring areas of the offensive zone. Of course, that will change when he plays against adults, but he has shown an adaptability towards the changing nature of a given game. He is a relentless forechecker and loves to fight for the puck. He may not do it at full speed every time, but there’s an intimidation factor inherent in his on-ice presence. Offense, however, is his calling card, as we’re discussing a player who had a 27-game points streak in the QMJHL and has scored goals in bunches — he had a monster November of 11 goals and 21 points in just 12 games. Meier is very difficult to dislodge off the puck, and is even tougher to move from in front of the net. He uses his size and strength in every in-game situation regardless if it is warranted or not. This kid will never back down, and responds to both direct and indirect provocation. Could turn out to be the draft’s best goal scorer when hindsight is eventually applied.