The Generals’ quest for their first Memorial Cup started off well as Hunter Smith scored the game-winning goal in the third period to give Oshawa a 4-3 win over Rimouski on Saturday in Quebec City. 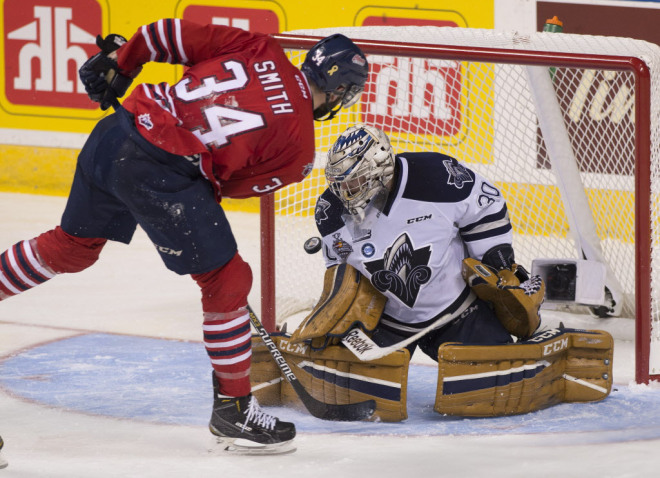 NEW YORK (The Draft Analyst) – Hunter Smith scored the go-ahead goal midway through the third period, giving the Oshawa Generals a 4-3 victory over the Rimouski Oceanic in their opening game of the 2015 Mastercard Memorial Cup.

Smith, a second round draft pick of the Calgary Flames in 2014, buried a rebound of his initial shot past Rimouski goaltender Philippe Desrosiers at 9:34 of the third to break a 3-3 deadlock. The Oceanic had tied the score at the 3:48 mark of the final frame when Winnipeg Jets-draftee Jan Kostalek tallied a power goal as Smith served a minor penalty for tripping.

First period goals by Tobias Lindberg and Michael Dal Colle gave Oshawa a 2-0 lead. But Rimouski received goals from Tyler Boland and Alexis Loiseau just 44 seconds apart late in the first to tie the score after 20 minutes. The Generals took a 3-2 lead into the third period thanks to a second period strike from defenseman Stephen Desrocher, who is the 145th ranked North American skater on the National Hockey League’s final draft rankings.

Oshawa’s Ken Appleby stopped 19 of 22 shots for the victory. The Generals play the Quebec Remparts on Sunday. Desrosiers had a solid 33-save effort for the Oceanic, who play the Kelowna Rockets on Monday night. Kelowna lost its opener on Friday night to Quebec, 4-3.