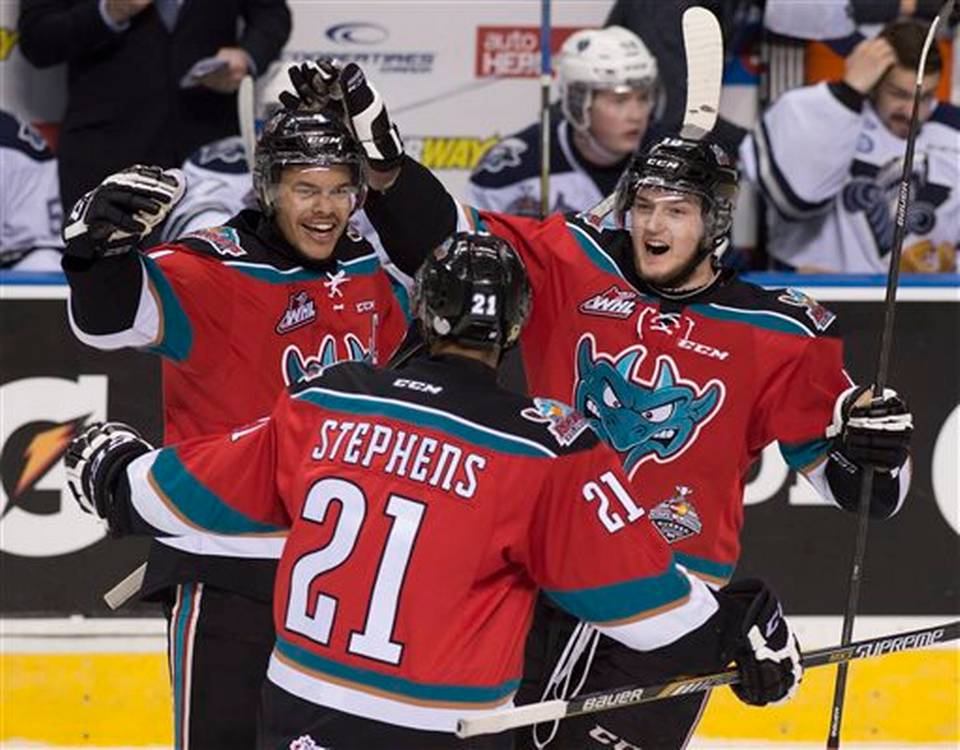 NEW YORK (The Draft Analyst) — Nick Merkley and Madison Bowey each had a three-point night as the Kelowna Rockets  earned their first win of the Mastercard Memorial Cup with a 7-3 thrashing of the Rimouski Oceanic. Merkley, expected to be a first round pick in this June’s National Hockey League Entry Draft, scored two goals and added an assist. He now leads the tournament in scoring with five points. Merkley’s first tally opened the scoring just 52 seconds into the first period when he took a feed from Leon Draisaitl (EDM) and beat two defenders before slipping a backhander past Rimouski goaltender Louis-Philip Guindon. Bowey, a second round pick of the Washington Capitals in 2013, increased Kelowna’s lead to 2-0 at the 6:16 mark of the opening frame with a point shot for his first of the tournament. Merkley and Bowey would later combine to set up Gage Quinney’s goal at 14:27 which gave the Rockets a 3-0 edge, but Rimouski (0-2) received strikes from Chris Clapperton (FLA) and Michael Joly three minutes apart late in the first to cut the lead to 3-2 heading into the second period. The Rockets (1-1) would chase Guindon in the middle frame following goals by Quinney and Merkley, and Draisaitl  increased their advantage to 6-2 with under seven minutes left in the second when he beat Philippe Desrosiers (DAL) on the first shot he faced. Draisaitl, who was chosen fourth overall by the Edmonton Oilers in last June’s draft, added a shorthanded goal in the third to close out the scoring for Kelowna, which rebounded from a poor performance in a 4-3 loss to the host Quebec Remparts on Friday. Jackson Whistle made 28 saves to pick up the win. Frederik Gauthier (TOR) also scored for the Oceanic, who play Quebec on Wednesday.