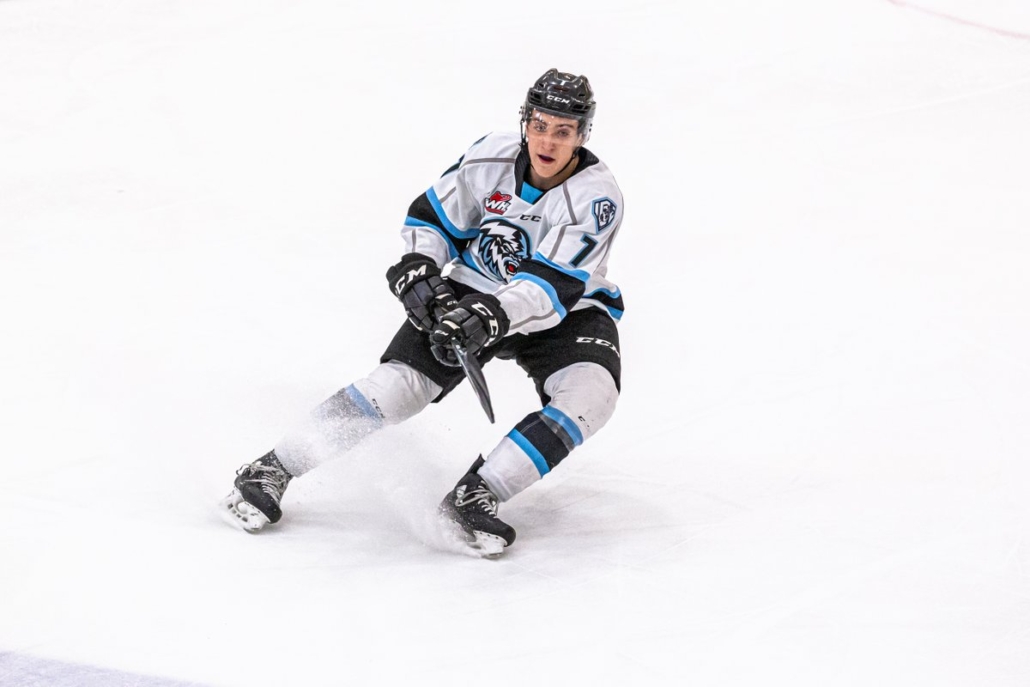 After recording 8 goals, 24 assists, and 109 shots in 57 games for the WHL’s Winnipeg Ice in 2019-20, Lambos wasted little time preparing for this nonstandard draft season by crossing over to Europe in October to play with JyP U20 in Finland’s SM-Sarja. The decision proved to be a wise one, as Lambos not only was an immediate difference maker for JyP, but he played well enough to earn a promotion to the adult-age SM-Liiga, albeit for only two games.

It became apparent from his very first shift with JyP back on Oct. 30 that Lambos wasn’t going to alter a two-way game built on mobility, physicality, and sharp decision making, and his team more than benefitted from it — JyP U20 were 6-9-1 with a -26 goal differential before his arrival and went 7-3-3 with a +14 differential with Lambos in the lineup. In his 13 games, Lambos averaged 20:23 of ice time while serving on the middle pairing and used on the top power-play and penalty-killing units.

Lambos is back with Winnipeg and appeared in the first two games before taking time off for what the team called a “medical procedure”.

Lambos possesses excellent mobility and quickness for a defenseman with a powerful, sturdy frame. He isn’t a consistent end-to-end rusher like most high-end defense prospects but eluding or out-pacing forecheck pressure is one of Lambos’s major strengths. His movements are incredibly efficient, especially when forecheckers try to fix him into a tough situation. Upon retrievals, Lambos will peel back multiple times, using his edges and balance (and quick shoulder checks) to keep the puck away from the side of the opponent’s blade.  His turns are both sharp and rapid, but Lambos drops a quick first step when he decides to head north and accelerate with a long, powerful stride.

Lambos is an integral part of his unit’s breakout which means the puck is on his stick quite often. He tends to avoid decisions that force him into the teeth of an opposing zone scheme, but his ability to keep the puck glued to his blade while on the backhand or when making an aforementioned escape turn is critical to his high completion percentage of first passes.

Lambos is a shoot-first defender who has set plays designed for him, and he can make a goalie earn his paycheck thanks to a heavy, accurate slapper (with little backswing) or an elite wrister that has beaten quality goalies across multiple leagues and levels. As good a shooter as he may be, Lambos is a highly unselfish player who is more than capable of quarterbacking the top power-play unit, which he did with distinction for both JyP U20 and Canada-White at the 2019 World under-17 Hockey Challenge. With Winnipeg a season ago, Lambos seemed to understand his role on a talented unit with the man-advantage and was successful at feeding accurate passes to the middle or circles. In Finland, seven of his 11 points came on the power play. Lambos knows how to create his own shot and uses his quick feet to walk the line or attack an opening closer to the goal.

Lambos is an excellent defender, one who can be assigned for a shutdown assignment against a top line or blanket the neutral and grey zones against easy entries. It is in these areas of the ice where Lambos’s physicality comes into play, as he uses his powerful leg drive and upper-body strength to eliminate puck carriers along the boards. He is a vocal on-ice communicator who shouts instruction and directs his forwards towards gaps in coverage. Inside his own end, Lambos stays fairly active and uses a quick first step to pounce on pucks in the corners or behind the net. He makes timely reads following defensive-zone draws and will step up towards the top of the circle to break up any set-play attempts. Lambos is an excellent penalty killer and has the endurance to withstand the full two minutes in his own end yet still provide an active stick and physical play near the net.

Being charged with significant responsibilities on either side of the puck is a testament to Lambos’s ability to make sound decisions in all situations. If he makes a mistake, it rarely involves puck management or unforced errors. Lambos seems to relish the opportunity to quickly transition up ice, mostly in the form of quick, no-nonsense first passes. Making accurate one-touch passes up ice with consistency requires a degree of foresight, yet Lambos seems incredibly confident when doing so. Although he makes a fair amount of risky decisions per game, Lambos never comes across as a selfish player who wants to hog the spotlight. The poise he shows under intense pressure is among the highest of any draft-eligible defensemen.

Top-pairing, minute-eating No. 1 defenseman for all situations.