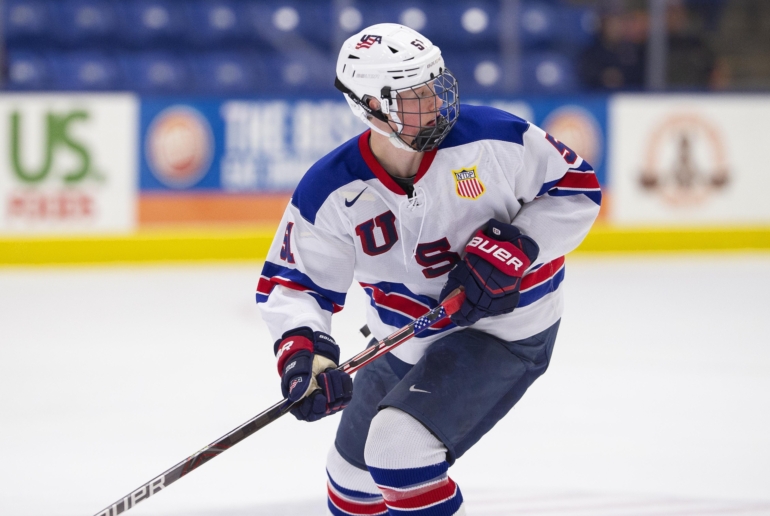 Lucius came into his draft season with high expectations after a 2019-20 campaign in which he led the under-17 NTDP in goals (31), shots (110), and tied linemate Sasha Pastujov with a team-best 50 points. He suffered a lower-body injury (believed to be knee related) before this season even started, thus missing the first 30 games. Lucius on Feb. returned to the U18 lineup with a bang, scoring two goals to lead the NTDP to a 5-4 win over powerhouse Chicago. He’s been on a short leash since, however, as he hasn’t played in back-to-backs and is limited to shorter shifts at 5-on-5. Although he is the nominal top-line center alongside Pastujov and Dylan Duke, Lucius’s usage and deployment are pretty sheltered and he never kills penalties. On several occasions, he didn’t see his first shift of a period until nearly four minutes in. Again, the reported knee injury and his ongoing recovery are likely driving these decisions.

Any assessment of Lucius’s speed, agility, and balance must consider his injury and how long it took him to get back into game shape. If you go back to his play a season ago — specifically at the World under-17 Hockey Challenge (November, 2019) and the Five Nations Tournament (February, 2020) — Lucius displayed average quickness and a nondescript first step but made up for it with excellent balance, edgework, and tight turns on a dime. Fast forward to this season, and it’s clear that Lucius is working hard to knock off the rust in all areas of movement and mobility. His skating lacks pop and explosiveness, and it’s doubtful he will ever dominate in these areas simply because of the mechanics of his short stride. All that said, his plus stickhandling and the aforementioned escapability should continue to serve him well at higher levels, and his ability to shift gears while in traffic can throw off an opposing zone scheme. There are stylistic comparisons to fellow native Minnesotan Derek Stepan, who has carved out an impressive NHL despite limitations in speed and dynamism.

Lucius has soft hands and can make plays on either his forehand or backhand. Although he can go through consecutive shifts without ever touching the puck, he is more than capable of successfully attacking traffic at top speed while maintaining possession well beyond the zone entry. He does, however, lose a fair amount of 1-on-1 puck battles along the boards, which normally isn’t an issue for skilled centers with his ideal measurements. It is best of Lucius to stay within himself, work give-and-go’s, and attack the net while off the puck.

Lucius is a lethal goal scorer, and he is far more of  a shoot-first pivot than anything else. The bulk of his possessions in the offensive zone usually end up with either Lucius or Pastujov positioned in the their respective off-wing circle for a one-time chance at the net. His office is anywhere in the slot, and Lucius’s wrister is heavy with a bowhunter’s accuracy. It’s quite common to see Lucius stationary in the offensive zone, especially since this year’s NTDP has multiple playmakers from the blue line and activate a ton. Another impressive aspect of Lucius’s shot is the velocity and marksmanship he demonstrates when receiving and teeing up off-target feeds, especially in his skates.

Lucius is accurate with his deliveries and can time a feed perfectly to an onrushing teammate. Most of his setups are the type the opposition can expect, but he has good enough vision to spot and connectr with a backdoor option. He also doesn’t force passes through the seam or from behind the net, but that doesn’t mean Lucius isn’t capable to creating a sweet look-off or slap fake intended for the weak side. Still, he’s a sniper, and it seems like most plays designed for his line require him to remain stationary in the slot with the hammer cocked

Lucius never should be confused with a stopper off the puck, and he is as big a one-way center as you’ll find in this draft class. More times than not, Lucius is either the last man on the back check or hovering up top, and he is not a physical presence on the ice. Keep in mind that this probably has more to do with his rust and an adjustment to game speed as Lucius recovers from injury, and he’s shown an improvement in understanding his contain spacing while assisting his defensemen in board battles. For whatever reason, Lucius does not kill penalties no matter the situation or what the scoreboard reads, although he is excellent on faceoffs, particularly in the neutral and defensive zones (over 60 percent success rate combined). If he finishes a check, however, it usually isn’t enough to separate an opponent from the puck.

Lucius is both creative and heady when it comes to play on his side of the red line. The more Lucius gets healthy, the more you will see him stay in constant motion and follow the appropriate path of the puck without overcrowding his linemate’s space. Sometimes he’s guilty of tunnel vision and telegraphs his intentions, but his reads and general awareness in any zone are adequate. The truth is simple — Lucius acts and positions himself more like a winger than a center, and if this is by design, then the potential for a position switch should be considered.