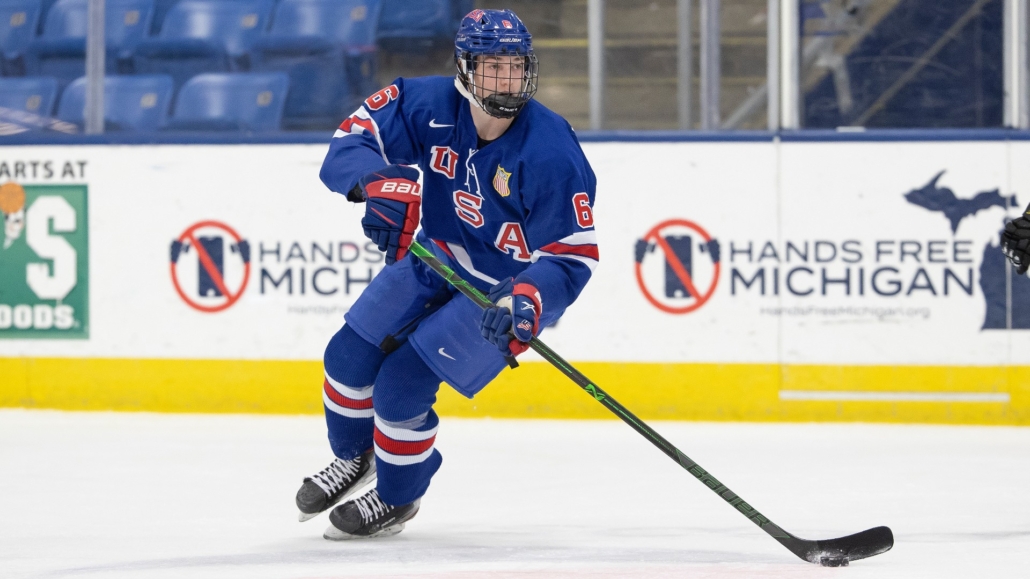 The top-rated defenseman for this year’s NTDP class, Hughes is pacing to have one of the most productive seasons by a recent NTDP rearguard. Although this current group of 2003-born prospects is deep at every position, Hughes has been able to distinguish himself playing the right side on the top pairing with Aidan Hreschuk, in addition to serving as the primary power-play quarterback and as a penalty killer. He recently hit a mini slump of zero points in seven games, but his 0.89 points-per-game average through March 11 is right around where notable NTDP alums such as Adam Fox (0.92), Quinn Hughes (0.82), and Cam York (1.03) were in their respective under-18 seasons. Although this year’s NTDP schedule to date has been far thinner on powerhouse NCAA and European under-18 opponents than in previous seasons, Hughes has been more productive against older collegiate competition (13 points in 12 games) than against junior-age USHL’ers (18 points in 22 games). He’s committed to the University of Michigan.

Skating unsurprisingly is at the heart of Hughes’s ability to dictate pace and tempo. Much like his brother Quinn, Luke is an effortless skater with a long, clean stride and instant acceleration. There are several factors that tie into his willingness to take the puck the length of the ice with ease, but multi-directional quickness, balance, and agility are at the forefront. Hughes’s mobility when combined with a strong will to attack pressure is a major problem for opposing forecheckers and in turn, opposing forechecking strategy as a whole. There’s simply no real way to prepare for him, and pray for the ankles of the checker who attempts man-to-man coverage, especially when Hughes is controlling the puck at the point. All that said, the most impressive aspects of Hughes’s skating are his elite edgework and his ability to maintain speed throughout his forward or backward transitions. He is a more than a handful to contain.

Hughes is the rare gem along the blue line whose hands can keep up with the quickness of his feet. Having soft hands and an aggressive mindset helps him deal with pressure in either safe or risky fashion, yet there is a high degree of finesse in the way Hughes outmaneuvers a dogged forecheck. It also helps having the puck glued to his blade under harrowing circumstances

Hughes has a hard, accurate shot that he likes to keep low, but he can pick the corners without much backswing. He uses both the slapper and the wrister while manning the right point, and set plays are designed for him off the pass. The more you watch Hughes, the more you notice the confidence he has in his ability to fit the puck through any window, shot or pass. He plays with his head up at all times but is known to look off or slap-pass towards the weak side. Having elite maneuverability in any direction quickly opens up the ice for him, and the passes Hughes delivers are always right on the tape. Bet the farm that if he makes 100 pass attempts a game, no less than four or five will be off the mark, and not by much.

These are two areas where Luke in his draft year already has separated himself from where his brother Quinn was back in either 2017 or 2018. Luke has the bigger frame and he certainly knows how to use it, but he also has the occasional mean streak where he’ll muscle up on an opponent along the boards. Additionally, Luke plays very close to his line and will hold firm against the quickest of onrushing puck carriers, using his long reach and an effective stick-on-puck technique. He’s by no means an eraser, nor does he intimidate with physicality. But the NTDP coaching staff clearly trust him for critical penalty kills and late-close situations. Hughes likes to roam from the slot, however, but most of his reads towards the line come across as well intentioned. Of course, having a thoroughbred on the back end comes with a few disadvantages in zone coverage, especially once he’s unbridled.

Having an acute sense of the ever-changing tactical situation on the ice seems to be a hallmark of all three Hughes brothers, so watching Luke dart or weave his way into an opening nobody saw developing shouldn’t be surprising. Luke also possesses an incredibly high panic threshold and is willing to delay (and delay more) while backskating or moving laterally in order to chase away a pesky checker. Every decision he makes on a given night can be both explained and justified, but Hughes definitely walks that tightrope near his line when it comes to handling the puck and the desire to attack closer to the goal. Quite frankly, his riverboat gambler mentality on the puck seems to be delivering a higher completion rate in 2020-21 than in his under-17 campaign last season, which says a lot about his growth and potential.

Top-pairing, franchise-caliber defenseman who perennially should rank among the top scoring rearguards.