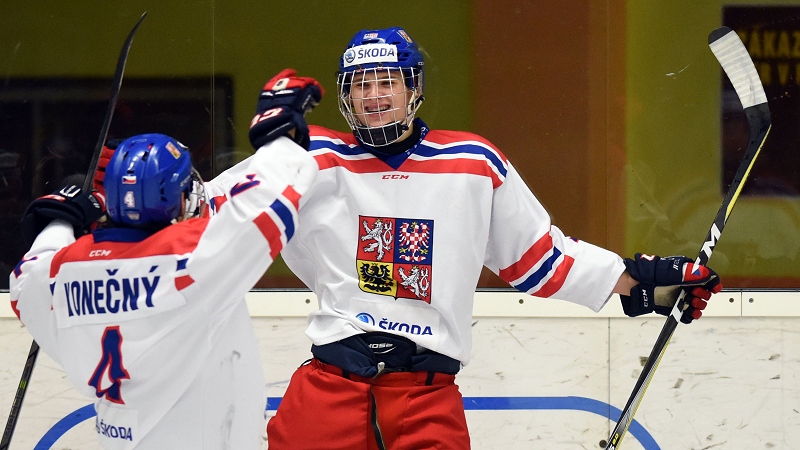 The game itself was sloppy and a tight-checking affair. Neither team were able to execute clean plays in open ice with consistency, and there were a lot of unforced errors that led to counterattacks. The current version of the NTDP lacks the star power evident in previous editions of the program, but center Thomas Bordeleau (Ranked No. 47) was the most dangerous forward; both for his play in the neutral zone and off the cycle. His centering feed to winger Dylan Peterson (Ranked No. 63) resulted in a beautiful tip-in from the slot, and it proved to be the only goal of the match. Otherwise, the number of high-danger chances were few and far between, and both squads spent more time in small battles along the boards than they did attacking or defending the rush. One aspect worth mentioning was the sustained pressure on the forecheck being applied by the Americans while holding a one-goal lead late in regulation. The likes of Landon Slaggert (Ranked No. 74) were critical on keeping the Czechs pinned in their own end for long periods of time, thus making life relatively easy for goalie Drew Commesso (Ranked No. 116) during his 19-save shutout.

#U18: Team USA takes a 1-0 lead on the power play as C Thomas Bordeleau (Ranked No. 47) makes a perfect pass for RW Dylan Peterson (Ranked No. 63) to tip home. pic.twitter.com/T6ULHTqNuK

A pesky waterbug with very good speed and a nonstop motor, Jirus at this point seems to have already solidified a spot on the April under-18 national team, not only for his league play, but also for being one of the Czech Republic’s best all-around forwards at the U18 event against Russia in Pribram in October. On Wednesday, Jirus was providing pressure on the forecheck, finishing his checks, and taking the shortest routes available to cut off breakout attempts. He plays fearless on or off the puck, and his quick inside moves reveal a player willing to pay the price to increase his shooting angle rather than settle for dump-ins or low-percentage shots from the wing. He kills penalties and also is used on the power play, where he can either run things from the half wall or battle for net-front positioning.

It’s no stretch to say that 10 years ago, not a soul would have considered a 5-foot-8 defenseman a legitimate draft prospect. But times have changed, and Blaha’s ability to manage a game ranks up there with the more notable draft-eligible defenders. He’s incredibly poised under pressure and is leaned on to breakout under all forms of pressure, but he also doesn’t look intimidated or risk averse when faced with a bigger forward lumbering towards him. Blaha is far from a shutdown guy, but to his credit, he will use hard shoves behind the net and do his best to eject an opponent from the low slot. His vision, playmaking and deceptive straight-line speed are some of his better attributes, but one thing you’ll notice regularly is his skate-to-stick transition and soft hands that help him handle tough passes in flight. He quarterbacks the top power-play unit and seems to be the favorite target of teammates looking to shake off a harassing forechecker

The absence of fellow goalie prospects Zack Malik has opened the door for Bednar to increase his reputation as one of the top goalies for the 2020 draft. He has ideal size and quickness, only unlike Malik, Bednar spends a lot of time on his pads. Still, he limits the amount of net space in either the vertical or horizontal angle, and in his butterfly crouch uses small lateral shuffles rather than an explosive push. The Americans had a lot of clean looks from the middle of the ice, but his forwards pounced on them quickly to significantly limit the amount that went through. Nonetheless, Bednar stayed true to his preferred stance and executed textbook glove saves while lanes were open or clogged. His glove is quick up or down, so using a European-style upright position seemed to trick shooters into thinking there was more to shoot at. He spent most of his time no higher than half a foot outside the blue paint, and his retreat speed against rush attempts appeared to be timed perfectly.The only shot that beat him was a high-slot deflection with a gang of bodies in front.

A top-pairing defender for the Czechs in both the Pribram tournament and on Wednesday against the Americans, Krutil is an excellent one-on-one defender with size who is utilized in all situations. He anchors the top penalty-killing unit with fellow big Jan Hampl, and sees power-play time on either the first unit with Blaha or running the second unit himself. Of all the Czech defenders, Krutil was the most consistent in his positioning at the line and neutralized multiple entries simply by holding his ground and utilizing timely stick checks. He transitions quickly from north to south while displaying textbook angling, and the smaller, quicker American forwards had difficulty avoiding his presence inside or out. Krutil’s contributions on offense are limited to occasional forays deep into the offensive zone, but he’s an above-average skater for his size in terms of quickness and agility. His first pass tends to be crisp and accurate, but the ice conditions on Monday seemed unfavorable for both sides, thus increasing the amount of flubbed or mishandled passes.

An excellent skater in all directions, Sanderson was very active in a tight-checking affair, using his speed and agility to occupy openings deep in the offensive zone. If that was anything remotely resembling an odd-man attack, Sanderson ensured he was involved and did his best to generate quality chances. His skating is a big part of his game, not only for his speed and quick first step, but also for his agility and sharp turns to peel away from pressure. Sanderson certainly is a heady player who can process multiple options at the same time, and in doing so, he assumes a significant amount of risk when he turns on the jets to create a numbers advantage. In terms of creativity, his passing and vision are advanced for such a young defenseman, and the few mistakes he makes are far outweighed by a seemingly high completion percentage. Based on multiple observations thus far, however, one should not classify him (yet) as a pure power-play quarterback, and on Monday, those duties were given to either Owen Gallatin or forward Brett Berard. On defense, he’s a tough customer in one-on-one situations and not only holds his line, but looks for any opportunity to turn a neutralized zone entry into an immediate counterattack. His total package — size, speed, smarts — also includes NHL bloodlines, as his father Geoff was a prolific goal scorer for the Hartford Whalers in the 1990’s.

Much like Sanderson, Kleven has ideal size for a defender, albeit without the game-breaking mobility. Kleven is a vacuum cleaner in one-on-one play, and a lot of attempts to dance around him die a quick death somewhere between the red line just inside his own end. Kleven definitely is more of a shooter than a playmaker, and he has soft hands to quickly transition from receive mode to shooting. He owns a booming shot, one that requires little backswing to generate velocity. While most defenders his size can thrown all their weight into a slapper from he point, Kleven’s shot attempts seem effortless, even when limited to only one or two a game. In his own end, however, is where Kleven makes the bigger impact. He controls the low slot and is quick with his reads to interdict possessions behind his net. His puck retrievals were quick and decisive, and opposing forecheckers were trapped several times by way of turnaround stretch psses.

The younger brother of Vegas forward Alex Tuch, Luke is a shifty yet powerful puck possessor who handles difficult situations with confidence and poise. His execution of the cycle revealed a forward with total awareness of his role, and this was illustrated by his timing, clean pass execution, and proper positioning. Granted, all NTDP forwards, much like their international counterparts, are well schooled in the science of a cycle, but it’s always good to see a pre-draft forward executing plays in accordance with the doctrine everyone agrees upon. Against the Czechs, Tuch was physical on or off the puck and was used on the power play as a net-front presence. The match was tightly checked with over-populated low slot, thus limiting Tuch’s opportunites to utilize his dangerous shot. Normally, he is part of a set play where he slips away from his slot duties with the hammer cocked for a one-time attempt off a pass from the corner.  His skating is more powerful and balanced than it is quick and explosive, although one one occasion he outpaced the quicker Blaha in a 50/50 battle.

Recap: Team OHL vs. Russia U20
Scroll to top