Recap: Team OHL vs. Russia U20 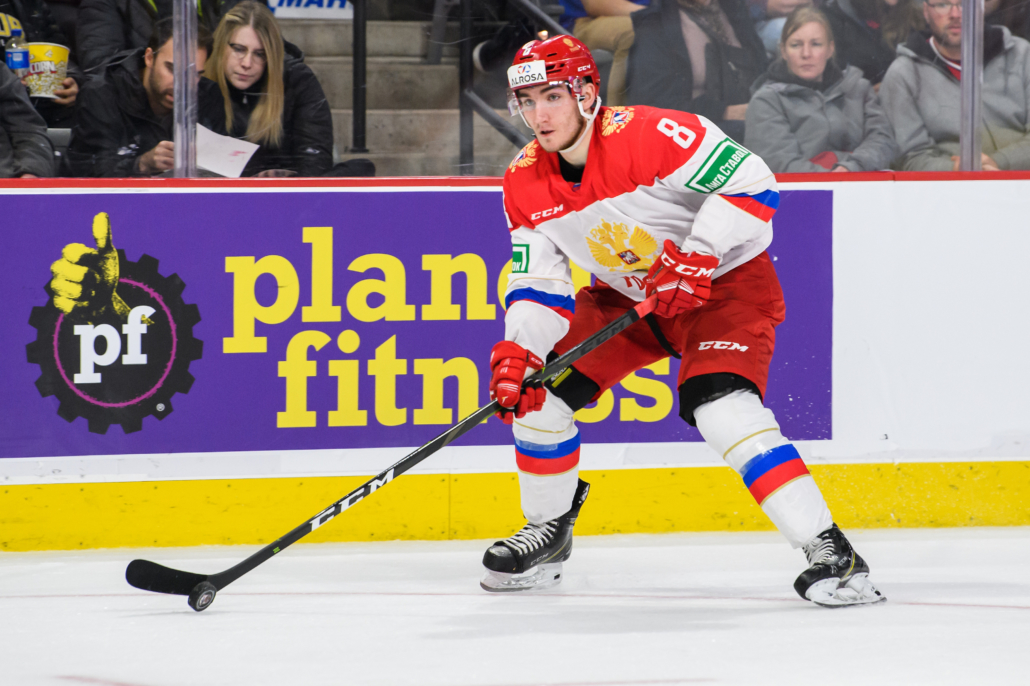 NASHVILLE (The Draft Analyst) — Team OHL might have had payback on their minds when the Russian under-20 team rolled into Kitchener, Ont. on Thursday for the middle portions of the six-game Russia-CHL Super Series. And when the dust finally settled, it was the Canadians who used a hot start and stingy defense to suffocate the Russians in a 4-1 triumph that gave the CHL its first win. Last year, it was Russia who blanked the OHL in Oshawa before winning the series with a two-game sweep of the QMJHL.

There were multiple standouts for the OHL, such as a pair of Dallas Stars prospects in hard-working center Ty Dellandrea and defenseman Thomas Harley, a mobile defenseman who attacked up ice with regularity and played sound positional defense. Dellandrea on the power play staked Team OHL to a 1-0 lead in the first period when he knocked home the rebound of a tricky shot by Quinton Byfield (2020 Draft). Cole Perfetti (2020 Draft) made it 2-0 three minutes later when he finished off a pretty tic-tac-toe passing play by tapping one into a yawning cage. Team OHL, which outshot the Russians 34-27, dictated the tempo from then on, and most of Russia’s chances came from the outside with a few exceptions that required a significant amount of luck and effort to execute. Connor McMichael’s (Washington Capitals) goal at 6:26 of the second frame made it 3-0, and Akil Thomas (Los Angeles Kings) sniped one late in the third to close out the scoring for the OHL’ers. The Russian’s foiled the combined shutout bid when Vladislav Mikhailov scored in the final minute.

The top center prospect for the 2020 draft earned Player of the Game honors for picking up two primary assists and showcasing his ability to marry power with finesse. Byfield has an incredibly soft touch on his passes, but also cradles the puck flat the second he receives it. This was evident in a pitch-and-catch exchange with Jamie Drysdale on the power play and was executed under pressure without the strong side being overloaded with support. Basically, it was a 2-on-2 up high on a power play, and a wrong move or flubbed pass could have led to numbers the other way. Byfield, however, looked extremely confident and calm in this instance, which resulted in a rebound chance off a shot that Ty Dellandrea popped home. Byfield is no stranger to physical play, and he met the challenge of dealing with some of Russia’s heavier defenders during possessions in the offensive zone.

You can’t dismiss (I included) the chance that you may see some crazy or impressive moment in an int’l all-star game with a bunch of drafted and soon-to-be drafted stars.

This PP had Byfield and Drysdale playing catch while wearing out the PK’ers attracting everyone’s attention pic.twitter.com/P1fXOVBbj3

Perfetti was one of several mutli-tool forwards Team OHL iced on Thursday, but he seemed to slide into his customary role as finisher near the net. He can control the pace and flow of a possession as well as anyone in the leguae, but last night was more Perfetti slipping into undetected areas to bring his deadly shot-release combination to bear. He played left wing on a line with center Akil Thomas and power forward Serron Noel, and they whipped the puck around with precision on Perfetti’s highlight-reel goal in the first that gave the OHL stars a 2-0 lead. He was unselfish with the puck and seemed to have good chemistry with his linemates.

There’s something promising about younger players, especially defenseman, who spend the offseason working on shortcomings identified in the pre-draft process. Harley, known primarily for being a graceful puck mover and one of the better passers among all under-20 rearguards, is beginning to show positive signs on the defensive side. He was decisive, and never once did he look nonchalant, passive, or disinterested. Harley made excellent reads in his own end, and executed plays on defense to collect the puck and transition the other way. Harley loves to skate with the puck, and he was the best defender (at least optically) for either side with exits and entires. He’s going to put up a lot of points one day, but fine-tuning his efforts and decision making in his own end is what will vault this youngster with unlimited potential into an elite category.

One of the top players in the entire CHL, McMichael looked every bit of the dual-threat forward he has been this season, setting up plays near the goal and sniping one upstairs for an insurance marker. McMichael, who played left wing with Quinton Byfield as center and Phil Tomasino on the right, is an excellent puck-possession option and makes heady decisions when operating behind the net or during the cycle. London executes breakouts in many forms, and it was no surprise to see him making perfect timing plays from the wall to trap aggressive forecheckers on their side of the red line. There’s no rule that says McMichael has to be labeled as either a playmaker or a shooter, because he clearly does both at a high level, and this kind of versatility should make him an legitimate candidate to run one of Team Canada’s power-play units at the world juniors in December.

#CHL: Quinton Byfield picked up his second assist of the night on this set up to Connor McMichael (WAS 1st/2019), who is annihilating the OHL this year.

You don’t lead the London Knights in goals and points as a first-year eligible without having some crazy skill. pic.twitter.com/yXRgEvRWL1

Getting overly excited from just one game has its drawbacks, but Sharks fans have to be pleased with the fact that Merkley not only continued to distribute the puck with pinpoint precision over long distances, but also made multiple plays in his own end that prevented scoring chances. Merkley is feisty and can ramp up the intensity when challenged, and we saw that in the win against Russia. He works the puck around the horn on the power play like a 10-year veteran, and it was a beautiful sight to see him on the same unit with 2020 draft stud Jamie Drysdale, who like Merkley is one of the OHL’s top offensive defensemen. Merkley seemed to limit his roaming to only a few instances where the situation called for it. He was physical behind the net and also made timely step-ups to initiate counterattacks. He’s never going to be confused with a shutdown blueliner, but it’s becoming apparent that the move to London with Dale Hunter as his coach has helped Merkely understand his responsibilities to become a more well-rounded player.

Few players of any age earn their money’s worth every shift as consistently as Podkolzin, who once again was kept off the scoresheet despite having multiple shifts in which he drove possession and showed little regard for a bum leg he injured on Tuesday. The kid is relentless on the puck, and his crash-and-bang style certainly had a place in a tight-checking affair on a North American rink. He took the puck strong to the net, showed his heavy shot on at least two occasions, and made poised plays under pressure in all three zones. Clearly this young man thinks the game at a high level, and his quick decision making should eventually lead to some puck luck that goes his way.

Another good shift by Podkolzin. Pretty self explanatory, and that was not an easy lead pass to make through sticks but he laid it flat on the tape. pic.twitter.com/BuwwnabtjM

One of the better under-20 two-way centers you’ll find, Morozov likely is earmarked to center one of Russia’s top two lines when they finalize their world juniors roster next month. He was Russia’s most consistent backchecker and paid attention to the slot when both Russian defensemen struggled to keep up with the OHL’s precision cycle plays. Morozov has a lot of trickery to his game from both a shot-attempt and set-up standpoint, and he keeps his feet moving while tracking the puck to get himself a clean look at the net. Some might argue that he’s simply doing his job, but Morozov’s ability to be a threat by way of his 200-foot play is what separates him from most post-draft prospects. He’s yet to record a point in any of the three games, but he’s taking and winning key draws and getting looks from in close.

Talk about helping your draft stock. Groshev is by no means a stranger to the international stage, as he was outstanding for the Russian under-18 teams in last year’s final Five Nations tournament and the follow-on U18 world championship. Points or no points, Groshev does a lot of things right and always seems to be in the right place to collect the puck and begin lengthy possessions with strong puck protection. Against the Quebec Leaguers, Groshev was on a line with fellow first-year eligible prospect Rodion Amirov, and the pace of those games was a bit more wide open. Thursday was more of a sloggin match from the Russian standpoint, as the OHL’ers exploited their elite puck possessors, thus keeping the likes of Groshev outside of the offensive zone more than coach Valeri Bragin would have liked. Groshev revealed a deceptive gear in the first period when he took the puck strong to the net on his off wing and fired off a quick shot that just missed.

Like most defensive defensemen faced with the prospect of slowing down a high-powered attack, Okhotyuk was leaned on to provide physicality and structure while playing against opponents he is all too familiar with. He skated the puck out himself several times in addition to making crisp first passes, but his noteworthy moments revealed physical prowess while handling the likes of 6-foot-4 center Quinton Byfield. Okhotyuk is a crease clearer who uses an active stick and covers the slot well, but he also showed backwards quickness in sealing off and angling rushers to keep them outside. It’s doubtful he’ll be a significant point producer at any level, and the Russians seem content with keeping their defensemen at home and on a short leash. If this trend continues and physicality becomes critical to a successful world juniors, then the likelihood that Okhotyuk gets picked should increase.

6 Famous Goalie Trades in the NHL
Scroll to top