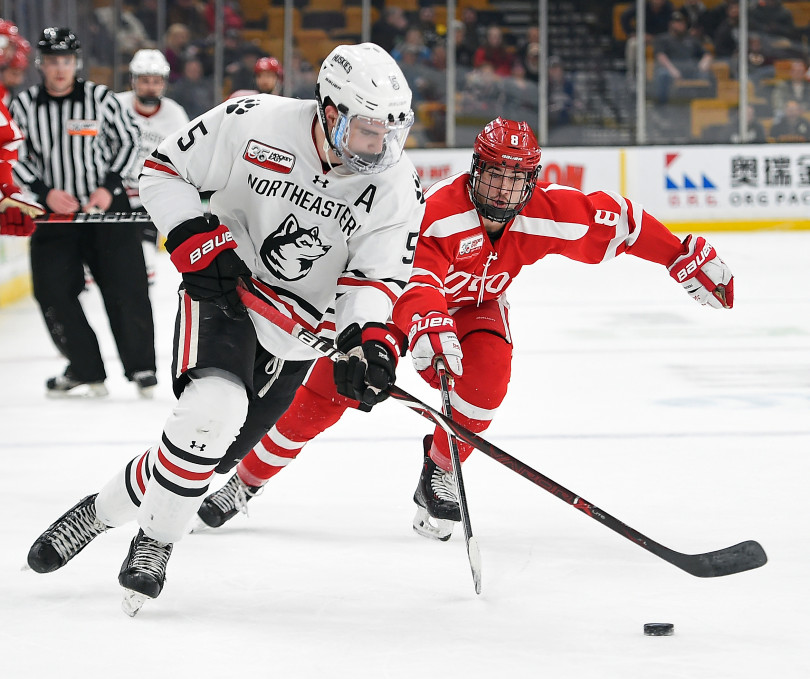 NASHVILLE (The Draft Analyst) — What better way for an undrafted college hockey player to boost his stock than to shine in front of a nationally-televised audience. And there are few better places to do it than the 68th annual Beanpot Tournament, which begins Monday night in Boston.

Boston’s four Division I college hockey programs — Northeastern, Harvard, Boston College, and Boston University — are not only geographically separated by a few miles, but also feature some of the top draft prospects in the NCAA. While over 40 participants were already drafted into the NHL, there are several others who are still looking to impress the scouting community and earn a contract once their college days are over.

Below is a breakdown of each team and a few notes on some of the NCAA’s notable undrafted free agents to keep an eye on.

A slippery playmaker with excellent vision and an accurate shot, Solow was the USHL’s top scorer in 2017 as a draft overager. Solow plays a lot bigger than his size and is willing to battle in the trenches. He can run the power play from the half wall or kills penalties while being a threat to score shorthanded.

A hard-shooting forward with soft hands and impressive skating, DeMelis has seen time on each of Northeastern’s first three lines and has even played center. He’s dangerous from the circles and is a target for one-timers on the power play. Demelis has battled with inconsistency the last few seasons but can be next to unstoppable when he’s locked in and playing with intensity.

A soft-mitted scorer with leadership qualities and a high compete level, Curry was a Beanpot hero for the Terriers in 2018 when he scored the overtime winner to beat Boston College. He plays on the top line, first power-play unit and also kills penalties. You’ll see him on the ice for all key situations. Curry scores most of his goals off rebounds, tip-ins, and loose-puck battles, but he also has a hard, accurate shot.

Patrick Curry matches Logan Hutsko with two goals on the night, unloading this shot to beat Knight high-glove and tie the game once again. #BUvsBC (via @NESN) pic.twitter.com/nn9SziDu21

Hardman is a Boston-area native who shredded the British Columbia Hockey League a season ago to a tune of 39 goals — second in the league only to current linemate Alex Newhook. He’s a big, physical winger who can score goals in a variety of ways, but he also stays within himself and understands his role as a slot or net-front presence. Hardman has decent speed, footwork, and edges for his size. He was invited to the Boston Bruins’ prospect camp last summer, so you know he’s on the NHL scouting community’s radar.

This former Edina Hornet and Bruins’ prospect camp invitee is one of the top scorers in the nation. Don’t think for one second that Dornbach’s production is due to drafted linemates Nick Abruzzese and Jack Drury. He definitely is his own player; one with escapability, excellent hand-eye coordination, acute vision, and an impressive shot-release combination that can offset any scheme designed to slow him down. It’s not easy being a skill forward surrounded by multiple drafted playmakers up front and on the back end, but Dornbach finds a way to stand out while playing unselfish hockey.

A former standout for St. Sebastian’s and West Kelowna in the BCHL, Murphy is power winger with agility and a hard wrist shot. Always considered more of a long-term project than a sure thing, Murphy has impressed this season and looks to be refining his game beyond storming the net or overpowering opponents in puck battles. He can string together a handful of impressive and hard-working shifts that are sprinkled with some flash and sound decision making. He also is used on special teams.