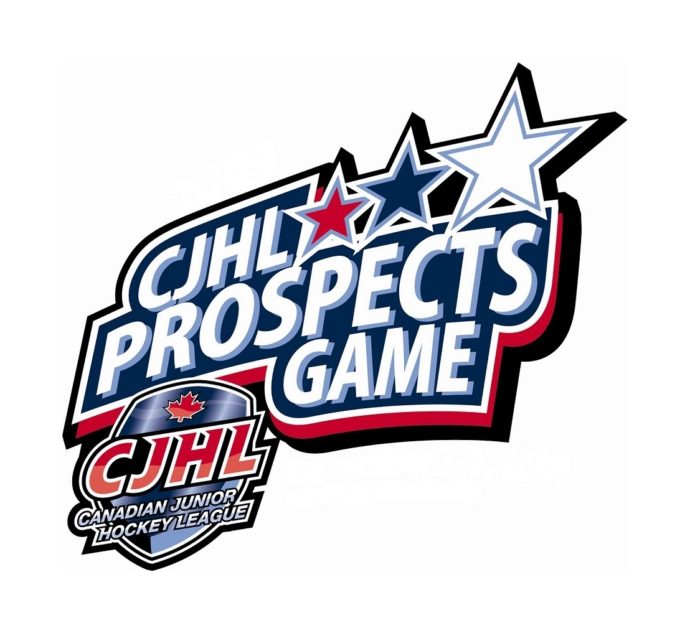 The Canadian Junior Hockey League — Canada’s largest circuit for NCAA-eligible players — held its annual midseason prospect showcase Tuesday in Hamilton, Ontario. Team West raced to an early lead and held on to beat Team East 6-4. It was the fourth consecutive win for Team West, which has dominated the event with a 10-5 recrod since it began in 2006.

Alex Young, a center from the Alberta Junior Hockey League’s Canmore Eagles opened the scoring in the first period with a power-play goal and added a second that gave Team West a commanding 5-1 lead in the second. Team East scored three goals in the third to make the game closer than it seemed.

AJHL leads Team West to a 6-4 win at the @cjhlhockey Prospects Game. pic.twitter.com/XjoZqTMsUz

A confident, mobile two-way defender who mixed in tough play in the low slot with quick strikes up the ice and flashes of finesse, Dunn was one of the more noticeable players on the ice for either side. His size and fluidity were noticed immediately, but he also didn’t hesitate with his decisions while displaying a significant on-ice presence. He was paired with a steady blueliner in Trey Taylor, and Dunn played the right side since both are lefties. They seemed to develop chemistry early on, and Dunn had no issues taking chances up the ice or slinging stretch passes off his back foot. He made several poised and well-executed plays on the puck to avoid pressure, and even in odd-man coverage, Dunn showed incredible reach and lateral quickenss to cover ground or plug a gap, but he also showed tenacity along the wall and in front of the net on the top penalty-killing unit. Dunn also gave us examples of his wrist shot (hard and heavy) and one-timer (hard, low, and on net). He may come across as nonchalant because of his body language and demeanor, but Dunn definitely knows what he’s doing with the puck and he ends up looking sharp in the process. Taking many risks with the puck led to a few turnovers but none were egregious and the intent behind the execution was sound. He’s committed to Maine.

A lot of eyes were on this gifted puck mover, who is expected to be picked within the first three rounds of this year’s NHL draft. Benning was his usual aggressive self while darting up ice and hovering near the hash marks or faceoff circles for loose change or a quick feed from a board battle. He rifled one home to make it 2-0 in the first period and made several impressive stretch or seam passes later on. Benning in league play handles the puck a ton but on Tuesday he was far more generous and textbook in delivering passes to the open man in any of the three zones. He has little to prove in terms of puck skills, creativity and skating — most observers at this point understand the kind of fleet-footed playmaker Benning can be. Defensively, it was a bit of a mixed bag in terms of success rate, as he alternated between overcommitting and keeping opponents to the outside with effective stick thrusts and shoves. Playing in the NCAA for the University of Denver will help him get his timing and positioning down when defending against the rush, but he’s super slick and heady to the point where he’ll get beat and recover possession within a 3-5 second instance. Benning is a lot of fun to watch and has unlimited potential.

Michael Benning gets up in the attack for Team West to give them a 2-0 lead over Team East at the CJHL Top Prospect game! #OneCru | #AJHL | @TheAJHL pic.twitter.com/jtrRHaLoWA

Another solid two-way defender expected to get drafted in June, Edwards has an uncanny way of quickly recovering from his own mistakes and cleaning up gaps in coverage. He’s a very good skater with a hard shot, although on Tuesday he wasn’t as active on the offensive side of things. Edwards  also used the boards or glass to avoid pressure far more than spinning away or retreating back, but his conservative nature paid dividends in defensive-zone and slot coverage. He has power-play quarterback potential and should be groomed to be the primary safety net for his teammates who are subjected to a heavy forecheck.

The highest-rated CJHL forward in my latest rankings, Savoie was another must-see prospect to track in this game. He lived up to the hype to a degree, notching a first-period assist on a power-play goal and slinging a nasty wrister into the upper half for a goal in the second. His interest and involvement in plays along the boards increased significantly in the second period, and the rest of the night revealed Savoie accelerating into openings, getting looks at the net, and delivering hard hits the remainder of the night. He was centered by Danny Weight and the duo developed chemistry early in the game. Savoie saw time on the top power-play unit and seemed to get a healthy chunk of offensive-zone starts.

Carter Savoie gets his name on the boxscore giving Team West a 3-0 at the CJHL Top Prospects game! #OneCru | #AJHL | @TheAJHL pic.twitter.com/1Tzy8BzolM

A turbo-charged center who killed penalties and did well in the faceoff circle, Loney’s straight-line speed and explosiveness was the most noticeable on Team West. Even more impressive was his ability to stay under control while moving at top speed and cutting into a newly-formed opening. Multiple aspects of Loney’s skating measures on the higher end of the scale — edges, first-step quickness, acceleration, and a clean stride. His balance was tested several times by bigger defenders and he was able to power through checks or maintain possession while being harassed. Loney was an inside player who showed little fear when taking the puck into traffic and was willing to the driving force for his line. Without the puck, Loney was an aggressive forechecker, even in the third period with his team enjoying a comfortable 5-1 lead. His decision making as a whole remained consistently solid.

Cooley began the game as a dedicated checker with sound instincts before revealing impressive puck skills that eventually resulted in a goal for Team West. He centered the top penalty-killing unit and won a good amount of defensive-zone draws. For the entire night, Cooley was aggressive on the puck and forechecked with smarts and intensity. He was more than willing to sacrifice his body but it was done without giving away much in positioning. Cooley is a slightly-hunched skater but accelerates to an acceptable top speed that puts checkers on notice. He made a beautiful diagonal pass through the slot to catch a trailer in stride for a clean look at the net, and later on snapped off a couple of shots at the net on his off wing, including a bullet wrister that he labeled for the inside of the near post. Cooley also didn’t turn down many chances to deliver a solid check.

Kovich easily was one of the more impressive forwards throughout the game. He was physical with an in-your-face style, but he also looked very smooth with the puck in transition while showing off soft hands. Kovich spent most of the match on Team West’s top line with Danny Weight and Carter Savoie, but Kovich was far from a passenger. He’s a very good skater who made well-timed reads that helped him get an extra step or two on puck-gazing opponents. Although he played alongside several dependable puck handlers, Kovich confidently carried the puck through the zone and made smart plays near the line. His vision, timing of pass delivery, and pass accuracy were impressive as well.

A smooth-skating two-way defender who was a late add to the roster, Kincaid displayed smooth skating, quick backwards speed, and fluidity in his movements in all directions. He may have had moments where he was on the wrong side of a scoring chance, but Kincaid’s puck delivery was crispy, clean, and on the tape, especially following a footrace with pressure breathing down his neck. Kincaid saw time on Team West’s second penalty-killing unit and was rigid in his slot coverage.

It’s good see an obviously talented forward play in an environment that gave him multiple opportunities to shine. That isn’t a knock on last year’s NTDP at all, as the team that included Alex Turcotte, Trevor Zegras, Jack Hughes, and John Beecher — four centers who were first-round picks — simply had no room for a player like Weight. With Penticton, Weight has flourished as a top-line center and power-play specialist, and on Tuesday he revealed the kind of trickery you rarely saw when he was used as a depth player a season ago. Stylistically, his skating reminds me of his father Doug, who was an NHL all star with Edmonton and a Stanley Cup Champion with Carolina. Danny definitely is a pass-first playmaker, and his through-the-legs setup from behind the goal that resulted in a tally for Kyler Kovich was one of several highlight-reel plays he delivered. He also came close to sniping one inside the short-side post and made several moves in the neutral zone to sidestep pressure. Still, there were a few moments of individual play that could easily have been avoided, specifically on a few unsuccessful zone entries into the teeth of the defense. Overall, however, Weight was one of the more noticeable players on the ice and in a good way.

Team East’s top defender from start to finish, McIntosh was fast, assertive, physical, decisive, and then he threw in some more physicality to boot. He quarterbacked the lead power-play group and revealed outstanding vision and pass accuracy during several tight-quarter scenarios. McIntosh also joined multiple rushes without hesitation and would linger near the low slot if the puck was being fought for behind the opposing net. On one occasion, McIntosh collected the puck in his own end and went coast to coast before turning Michael Benning inside-out. Defensively, McIntosh was an on-ice communicator and directed traffic. He maintained a very tight gap and held his line, and several times  he looked to deliver a solid thumping near the wall. Looks like St. Lawrence has a good one on the way.

Much like Loney for the West, Alexander was buzzing all night and refused to give up a single inch of ice without a fight. He is an excellent skater with fantastic speed and a quick first step, but it’s the desire and eagerness behind Alexander’s efforts that make him more than just a kid with a high motor. Alexander was one of the better players for Team East at last month’s World Junior “A” Challenge, and his performance in Hamilton on Tuesday was no different. He consistently hounds the puck no matter the situation, especially on the penalty kill. In one last night’s more impressive feats of any player off the puck, Alexander was relentless in pressuring defenders during a penalty kill and even had the presence of mind to attempt a breakaway at the end of an incredibly long and arduous shift. His play in all three zones is exemplary.