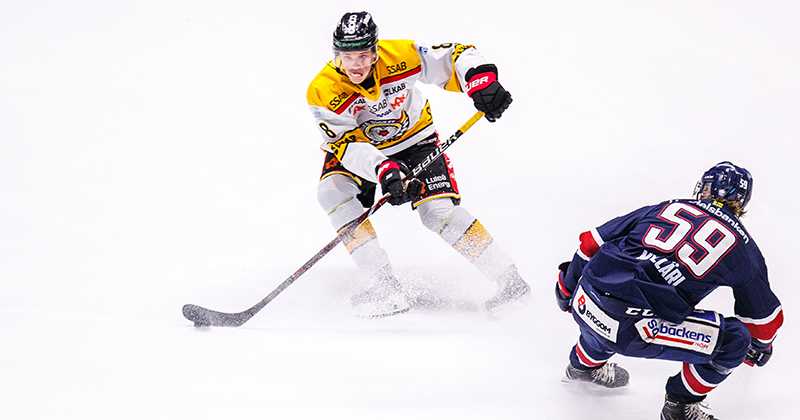 A dual threat winger who can humble a defense with timely gear shifting and a deadly shot-release combination, Gunler has one of the draft’s most impressive skill sets when it comes to creating and finishing plays.

Gunler is a strong north-south skater with deceptive lateral quickness. He owns a wide stride which can seem choppy at times, but he still is a threat in open ice, not only for his above-average straight-line speed but also for his ability to keep defenders puzzled by looking off while alternating speeds and feigning indecision. The truth is that Gunler is one of the more calculated forwards in his age group when it comes to getting the puck into the zone cleanly, and even at the adult level, opponents seem to have a legitimate fear of playing him too close upon entry. These developments can yield undesirable results for the other team, especially the goalie, who then has to worry about Gunler blistering a nasty wrister from as far out as the top of the circle. Concerns about his footwork or quickness seem to be overstated — when he’s engaged and locked in, Gunler can outpace quick forecheckers by a good stride or two.

Controlling the puck at top speed and his decision-making thereafter are strengths in Gunler’s game. He keeps the puck wide more times than not, but his aforementioned gear shifting and passing proclivity seem to keep defenders cheating towards the middle. Gunler doesn’t have an issue creating and time and space for himself with or without the puck, and one explanation of his uptick in production in Champions League play versus the SHL is that non-Swedish teams likely didn’t do enough homework on Gunler’s ability to slip into openings undetected and blast one on goal.

Gunler is an excellent passer for a winger with a reputation as a goal scorer. He can go from receipt to delivery in one motion, even with his back to the play in the neutral zone. Gunler’s forehand-backhand mechanics are advanced and borderline on being elite among his top peers. One aspect rarely talked about is his breakout positioning — Gunler seems to get the gist of set breakout plays such as the “up” that allows him to receive the puck in stride in the middle of the ice. He isn’t as reliable in the wheel or rim set plays, but most of those are neutralized anyway by your standard quick-thinking Swedish checker in a clogged neutral zone.

A significant improvement in Gunler’s game has been his consistency with forechecking and routes to the puck; making proper reads in the neutral zone, and busting it on the back check. He is far from a stopper on defense and will let opponents facing the goal gain inside positioning, but he stays within harassing distance and will cover the low slot if it’s vacated.

The transition from the under-20 Superelit to the elite SHL has revealed several deficiencies. Although he plays for the league’s best team and ice time is at a premium, Gunler has had consistency issues with compete and battle level, motor, and forced passes to covered mates to avoid contact. The latter is par for the course for youngsters, but the former likely explains the peaks and valleys of his game-to-game usage, which through Jan. 14 sits at 10:17 per contest in 14 Champions League games and 9:57 in 32 SHL matches. Gunler proved in the Superelit that he can engage in physical battles and win. In the SHL, however, he spends too much time on the periphery and gazes at pucks when his support clearly is needed. Gunler rarely is on the ice late in late-close scenarios and doesn’t kill penalties, nor has he been dependable in board battles. This is relevant because the SHL is infinitely less physical than the AHL or NHL, and finesse scorers who aren’t scoring yet also unwilling to fight for pucks run the risk of either getting benched or losing the respect of their teammates, or both. As we saw last year with super-sniper Arthur Kaliyev, teams are more than willing to overlook superior puck skills if on or off-ice work ethic is questioned.

#SHL: RW Noel Gunler (Ranked No. 23) ended Malmo’s shutout bid with this perfect shot in garbage time in Lulea’s 4-1 loss. Gunler has 1-1-2 in his last two games and played a season-high 12:54 tonight. pic.twitter.com/XodH4baQOw

#ChampionsHockey: RW Noel Gunler continues to wear out the CHL, scoring twice in Lulea’s QF match vs. Lausanne. Now has 4g & 2a in 9 CHL gp and will advance to the next round. He’s a totally different player in these games than in the SHL, which messes with my overall assessment. pic.twitter.com/NQQsNaQEqL