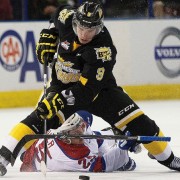 Ivan Provorov
Position: Defenseman
Shoots: Left
Height/Weight: 6’0, 200 lbs
Born: January 13, 1997, Yaroslavl, Russia
Central Scouting Rankings (Prelim/Mid/Final): “B” / 10th NA / 7th NA
Summary: Provorov is an outstanding two-way defenseman known more for his ability to nip scoring chances in the bud at an elite level. He’s a very good skater who can change the pace of a game; smooth, deceptively quick and very good at changing gears to catch opponents flat footed. He’s listed at 6’0, but at 200 pounds, he maintains a low center of gravity which makes him very difficult to establish position on. Provorov also uses a very long stick which helps him execute timely poke checks. Couple his reach with his elite positioning, and you have one of the best amateur defensemen at limiting opposing puck handlers with time and space. He is able to play his man close enough to allow him to blanket the puck carrier, even if they stop on a dime and reverse the direction of the puck. He’s the blueline equivalent of Guy Carbonneau; a modern-day permanent shadow. What exacerbates the situation for opponents is how quickly he can transition the other way. Provorov has a very hard and accurate breakout pass and can find the open man in and around traffic. He’s a workhorse who can log a lot of minutes and recover quickly from a long shift, which is important since he is a critical piece to running Brandon’s top special teams units. He also possesses a very heavy shot which he can deliver with velocity either standing still or while stepping into it. A complete player who has the desire and competitiveness to win while setting a good example with skill, dedication and a keen interest in improving himself. Although he thinks the game at a high level, there are times where you want him to take more risks on the offensive end and not settle for the safe play all the time, specifically dropping down to the top of the circles more often during a cycle. 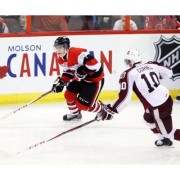 Travis Konecny
Position: Right Wing / Center
Shoots: Right
Height/Weight: 5’10,  176 lbs
Born: March 11, 1997, Clachan, ON
Central Scouting Rankings (Prelim/Mid/Final): “A” / 26th NA / 14th NA
Summary: Ten years ago, you’d probably classify Konecny as the kind of undersized player who’s draft day fate was out of his hands before he even hit the ice. But times have changed, and we are seeing more players like the Ottawa 67’s skilled captain come to the forefront. It is very difficult to pinpoint what Konecny’s best assets are simply because he is just so darn good at so many things; he hits, he scores, he skates, he leads and he delivers. Konecny possesses the determination, speed and goal scoring abilities of Zach Parise, but also provides leadership, physicality and dependability. You will rarely, if ever, see this kid take a shift off. He plays through pain. He plays through adversity and he does so with a predatory mindset. Konecny possesses an arsenal of moves and ways to create space; he is extremely difficult to telegraph and wargame because he is one of the few draft eligibles who can make plays while moving at a very high rate of speed. Konecny is just as dangerous being kept to the outside as he is in the slot, as teams remarkably seem to lose him despite being Ottawa’s best player. His elusiveness and vision make him as dangerous without the puck and he is with it on his stick. As mentioned before, he’s not big (5’10) but he has a thick enough frame to withstand a lot of punishment, and when he hits you, it accomplishes his intent. He makes smart decisions, working through situations while leading and communicating both on the ice and on the bench. A very smart and savvy leader who is wise beyond his years. Gamer mentality with star potential.

Felix Sandstrom
Position: Goaltender
Catches: Left
Height/Weight: 6’2, 191 lbs
Born: January 12, 1997, Gavle, SWE
Central Scouting Rankings (Prelim/Mid/Final): ”A“/ 3rd Eur/ 3rd Eur
Summary: It’s gotten to the point where it feels like the chances of a goaltender being drafted by the Flyers and actually playing for the Flyers are about as slim as a Spinal Tap drummer surviving more than a week. Twenty (count ’em) netminders have heard their names called on Draft Day by Philly front office types since 2000, and not a single one ever started an NHL game for them. And while we think Sandstrom is an excellent goaltending prospect, you’ll have to pardon our history-based skepticism. He’s a big kid who quickly covers a lot of ground from post to post, but the technical aspects of netmindning — squaring to the shooter, puck tracking and reading plays — are not strengths at this point in his development. He’s a smart one, however, and while he doesn’t furnish much of a net to shoot at, he’s got a ways to go until he can trusted with NHL minutes. Keep your fingers crossed for this guy more than the rest.

Matej Tomek
Position: Goaltender
Catches: Left
Height/Weight: 6’3, 180 lbs
Born: May 24, 1997, Bratislava, Slovakia
Central Scouting Rankings (Prelim/Mid/Final): ”B“/ 4th NA/ 5th NA
Summary: Tomek is simply too good for the North American Tier II hockey circuit, so he’ll be headed to North Dakota to play for the Sioux. He’s obviously got the size like Sandstrom, but unlike his fellow draftee he reads plays and gets squared to shooters much quicker. He’s also got an active stick and like to use it to break up centering feeds and sneak in a poke check or two when faced with breakaways. He screams “Law of Averages” pick but we actually like this pick for Philly.

Samuel Dove-McFalls
Position: Left Wing
Shoots: Left
Height/Weight: 6’2, 207 lbs
Born: April 10, 1997, Montreal, QC
Central Scouting Rankings (Prelim/Mid/Final): NR/ 73rd NA/ 70th NA
Summary: We think the Flyers went a little off the board by a full round by nabbing this power center prospect who can provide all the intangibles, including faceoff proficiency. Philly will be happy from a possession standpoint as he led a very good Saint John’s team in shots and won 54% of his draws.

Mikhail Vorobyov
Position: Center
Shoots: Left
Height/Weight: 6’2, 194 lbs
Born: January 5, 1997, Ufa, Russia
Central Scouting Rankings (Prelim/Mid/Final): NR/ 36th Eur/ 24th Eur
Summary: Russia’s top line center at U18’s had a better showing in Lucerne than at the 5 Nations and Junior A Challenge. He plays a solid two-way game and can blanket an opponent away from the puck but his skating has actually been a real concern. A smaller North American rink should help but don’t count on him become an explosive point producer as he’s far too responsible and doesn’t like to take risks. Consider him a bottom-six/penalty killing option at best.

David Kase
Position: Right Wing/Center
Shoots: Left
Height/Weight: 5’10, 164 lbs
Born: January 28, 1997, Kadan, Czech Republic
Central Scouting Rankings (Prelim/Mid/Final): “A”/ 10th Eur/ 11th Eur
Summary: Paper-thin playmaker who certainly wowed people with his elite playmaking abilities but did little else to justify the high preseason ranking. We thought Kase should have been taken in the late second round by a contending team who could afford to take a rake on a one-dimensional uberscorer because they were deep enough to cover for his defensive inadequacies. But it started to hit home on Draft Day that his inability to compete and play a strong game like other diminutive draft eligibles was turning everybody off and making the high ranking seem a tad off kilter. Nevertheless, Kase is in fact a dynamic offensive force who skates well and threads the needle. It’s up to him , however, to reinvent himself as a complete player or else he’ll never sniff (or desire to sniff) a North American rink.

Cooper Marondy
Position: Right Wing/Center
Shoots: Right
Height/Weight: 6’0, 178 lbs
Born: December 20, 1996, Brighton, MI
Central Scouting Rankings (Prelim/Mid/Final): “B”/ 63rd NA / 53rd NA
Summary: When the Flyers’ announced they had selected “Cameron Marody” with the 158th pick on Day Two of the draft, we kind of wondered if they meant Cameron Hughes (whom the Bruins selected seven picks later) or the actual Cooper Marody himself. Whether or not it was a case akin to the ole infirmary switch-a-roo is not important; Cooper Marody — Sioux City’s top line center who can also play wing – is a cross between Ryan Callahan and Mike Richards who plays with tremendous desire and determination but also owns an impressive set of hands and keen vision. He’s not a flashy skater but can surprise you skill plays during a cycle. Also part of Michigan’s outstanding 2016 recruiting class.

Ivan Fedotov
Position: Goaltender
Catches: Left
Height/Weight: 6’6, 191 lbs
Born: November 28, 1996, St.Petersburg, Russia
Central Scouting Rankings (Prelim/Mid/Final): NR/ NR / NR
Summary: Great project pick but you have to wonder how loaded his gaudy stats were playing for Reaktor in the MHL, especially since he only faced 30 or more shots four times in 41 games and completely melted down at the end of the postseason. He’s certainly ready for KHL action based on both his build and his statistical progression (he played in one senior circuit game in 2015).