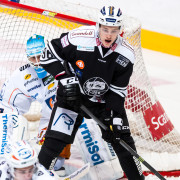 Mikko Rantanen
Position: Right Wing
Shoots: Left
Height/Weight: 6’4, 211 lbs
Born: October 29, 1996, Nousiainen, Finland
Central Scouting Rankings (Prelim/Mid/Final): ”A“/ 2nd Eur/ 1st Eur
Summary: Rantanen is most certainly a skilled power forward, but not in the physical sense. He has an NHL build and he uses his size to protect the puck as good as anyone in the draft, but he’s also a very good playmaker who sees the ice exceptionally well and can draw opponents towards him before hitting the open man; an underrated aspect of his game. He’s is definitely a thinking man’s power forward in that he does not necessarily rely on brute force to make plays. Rantanen is also a highly opportunistic and low-maintenance goal scorer. He has to be because he does not possess nor rely on one signature move or asset — he scores goals any which way he can. His shot is above average but he makes up for it with a very quick and effortless release. Most impressive about Rantanen is how mobile he is for his size; his skating was once a serious concern, but he clearly made strides to improve his mobility as he now possesses a quick first step and a powerful wide stride. 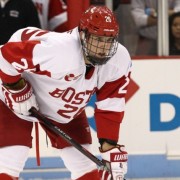 A.J. Greer
Position: Left Wing
Shoots: Left
Height/Weight: 6’3, 204
Born: December 14, 1996, Joliette, QC
Central Scouting Rankings (Prelim/Mid/Final): “B”/ 71st NA/ 69th NA
Summary: Strong and skilled big-bodied winger who didn’t earn the big minutes during most of his freshman season at Boston University. To his credit, he got David Quinn’s message and came back with a vengeance in the postseason. Deceptive speed and can be a playmaker. There’s no guarantee he’ll get big minutes next season either as the Terriers have a deep and elite incoming class.

Nicolas Meloche
Position: Defenseman
Shoots: Right
Height/Weight: 6’2, 204
Born: July 18, 1997, LaSalle, QC
Central Scouting Rankings (Prelim/Mid/Final): “B”/ 45th NA/ 40th NA
Summary: Deiberate two-way defenseman with size who can provide the Av’s with creativity and poise. A very smart player who would have been drafted higher if his skating wasn’t so average. But don’t let that fool you; he’s an offensive-minded player.

J.C. Beaudin
Position: Center
Shoots: Right
Height/Weight: 6’1, 181
Born: March 25, 1997, Longeuil, QC
Central Scouting Rankings (Prelim/Mid/Final): NR/ NR/ 64th NA
Summary: Nobody seemed to be talking (at least publicly) about how 41 of the sparingly-used Beaudin’s 53 points for Rouyn-Noranda were at even strength, and he finished top-30 in the entire QMJHL in eP/60 (sixth among centers). Great find here for the Av’s, who can groom him as a possible replacement for Ryan O’Reilly.

Andrei Mironov
Position: Defenseman
Shoots: Left
Height/Weight: 6’2, 194
Born: July 29, 1994, Moscow, Russia
Central Scouting Rankings (Prelim/Mid/Final): NR/ 46th Eur/ 66th Eur
Summary: Mironov will be 21 in a month, but he was one of the top defensive defensemen on Russia’s National Teams for several seasons. And while he did play a significant role on a deep Dynamo team  in the KHL, he was likely picked because the lure of the NHL is more negotiable as a 21-year-old defenseman rather than as a teenager. His offensive upside is limited, but he can play on the power play because he handles passes cleanly and has a very good shot. If and when he comes to North America, he’ll likely jump right to the NHL due to the level of competition he’s played against in Russia.

Sergei Boikov
Position: Defenseman
Shoots: Left
Height/Weight: 6’2, 195
Born: January 24, 1996, Khabarovsk, Russia
Central Scouting Rankings (Prelim/Mid/Final): NR/ 198th NA/ 183rd NA
Summary: Easily Drummondville’s most consistent defenseman during a difficult season, Boikov is another overage defenseman picked late because of an expected shorter development period. He is very physical and can deliver hard hits both along the wall and in open ice. His offensive contribution would be a bonus for a guy who has top-four potential and can log big minutes.

Gustav Olhaver
Position: Center
Shoots: Left
Height/Weight: 6’6, 214
Born: July 3, 1997, Ängelholm, Sweden
Central Scouting Rankings (Prelim/Mid/Final): “C”/ 68th Eur/ 89th Eur
Summary: It was hard not to notice Olhaver at the U18’s this past Spring. Unfortunately, it was only because his size makes him virtually impossible to miss.  Although he has the reputation of a solid checker, he doesn’t create plays or finish them, which at this point makes him nothing more than a seriously long-term project. Having a late birthday helps him in that regard.