NASHVILLE (The Draft Analyst) — Take my word for it;  the NHL’s revised draft lottery format, which was revealed on Tuesday by NHL commissioner Gary Bettman, is actually quite straightforward once you take the time to figure it out, and it actually doesn’t take that long. Normally, as in those days when there wasn’t a crippling pandemic to force a stoppage of play, 16 of the NHL’s 31 teams make the playoffs and the other 15 enter the draft lottery (usually in April) for the chance to win the first, second, or third overall pick in that year’s draft. Love it or hate it, the NHL’s ping-pong-ball lottery drawing attracts a ton of interest and glues eyeballs to screens of all kinds. This year should be no different, even with a couple of added twists.

Bettman officially cancelled the 2019-20 regular season during his announcement before outlining plans for both the postseason and the draft lottery, with the former having a profound impact on the latter. His directives call for splitting the league into two groups based on overall points percentages — seven lowly “lottery” teams who are eliminated from further competition will form one group, thus leaving the remaining 24 to battle in the playoffs.

Now, NHL types continue to hammer home the fact that 16 of those 24 teams haven’t officially clinched a postseason berth (more on that later) since they have to compete in a “play-in” round to advance to the real Round 1, where the league’s top eight teams await in the quarterfinals. The losers of the play-in round then join the seven aforementioned bottom feeders to form your standard 15-team lottery draw.

The problem with that is we would have to wait until late July or early August for the play-in round losers to make it a 15-team lottery. But time is obviously money, and the NHL is probably tired of losing truckloads of cash by the day. That’s probably the driving force behind their decision to hold TWO draft lotteries — Phase I on June 26 involving the seven punching bags and Phase II a month or two later once the play-in round is complete.

The first lottery is the bigger abnormality of the two because the draw will feature 15 teams, of which eight don’t even exist. That’s right, the league created ghost teams for slots 8 through 15 while the aforementioned non-playoff types occupy positions 1 through 7 in the order of their paltry points percentages. The other empty slots are nothing more that placeholders to allow the same lottery odds from 2018 and 2019 to be implemented. Below is the screenshot from Bettman’s video call. 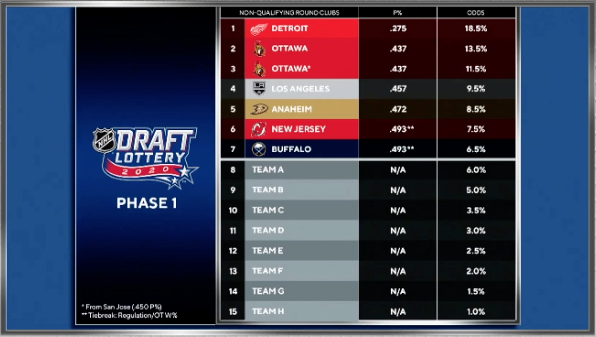 As you can see, the seven pushovers are listed, followed by the eight additional ghost teams. Those teams won’t be identified until after the play-in round. Like previous years, Phase I will consist of three lottery draws with potential winning lottery combinations assigned to all 15 slots.

Here is a hypothetical example which will show the inner workings of this revised lottery process:

The sole purpose of Phase I (outside of the ad revenue) is to determine if a Phase II is necessary. In the above scenario, a Phase II lottery will be required to determine the draft order from picks 3 to 15 because a ghost team in Phase I took a lottery slot over one of the top seven, which in this case would be Ottawa, Los Angeles, Anaheim, New Jersey and Buffalo. The good news for the seven official lottery teams is that those who win the drawing for picks No. 1, 2 or 3 in Phase I — in this case Detroit and Ottawa — get to keep that pick no matter what the hell happens in a subsequent drawing. Those remaining five who don’t get lucky simply fall back to no lower than three slots, which will be assigned by points percentage ahead of every play-in round loser that doesn’t win the lottery.

If all three lottery drawings in Phase I go to any of these seven lesser teams, Phase II is cancelled and picks 1 through 7 are determined on the spot on June 26. The losers of the play-in round are then arranged in point-percentage order for picks 4 to 15. If this happens, we’ll know the exact 1-15 draft order when the play-in round is complete.

This phase is necessary only if one, two, or three ghost slots win the Phase I lottery drawing on June 26. This drawing will not include any of the seven non-playoff teams because it’s essentially a re-draw to determine which physical play-in loser gets the right to a lottery pick. Therefore, only eight teams will be involved in this drawing (if necessary) with each team owning a 12.5 percent chance to win our hypothetical scenario’s remaining lottery pick.

Using the results from our Phase I hypothetical scenario, let’s try to create a second one for Phase II for when the play-in round is over:

Keep in mind that if Ghost Slot B wins the No. 1 pick in Phase I, the play-in loser that eventually occupies Phase II’s Ghost Slot B does NOT automatically get the No. 1. For that to happen, they would have to win the second lottery drawing in Phase II. Again, the purpose of the placeholder teams is to have standard lottery odds in Phase I.

Lastly, there is one major consideration in terms of the dozens of 2020 draft picks — including several in the first round — that were acquired with playoff-based conditions. The league has yet to officially announce that a play-in series does not constitute as the playoffs, but rather an extension of the regular season without the stats counting. If it becomes official, a team like Arizona, which attached a playoff-qualification condition to the first-round selection it sent to New Jersey in the Taylor Hall trade, would be deemed a non-playoff team if they lose their play-in series with Nashville and retain their 2020 pick.

NHL says the round-robin/play-in are considered Qualifying for the Stanley Cup playoffs. And while this could still change, the NHL as of now considers that round a special set of games and not actual playoffs. So for record-keeping purposes, the playoffs weren’t expanded from 16