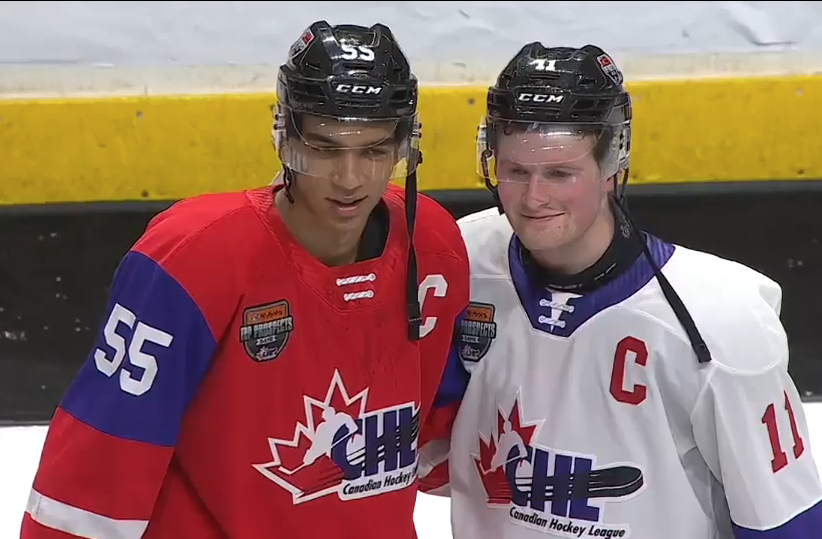 NASHVILLE (The Draft Analyst) – The comfort of genuine certainty is something rarely felt by anyone deeply involved in these guessing games of prospect evaluation and draft analysis. Since NHL clubs generally make it a point to shroud their internal draft processes in secrecy anyway, it should therefore be no surprise that questions surrounding this specific draft class remain unanswered, and will stay that way for several months. Furthermore, the shutdown of the NHL regular season and the subsequent postponement of the 2020 NHL draft has added a new, thickened layer of obscurity — as in, where the hell is it, what the heck is the format, and most importantly, when will it happen.

As impatient and perplexed as we may be, however, the amount of work that was poured into evaluating draft-eligible prospects prior to the recent global shutdown is beginning to bear fruits for the information-starved hockey fan to consume. If there was ever a positive to come out of the current mess we’re in, it’s the fact that most of us were afforded more time to get smart on a draft class than ever before. We may not ace this test, but we were definitely prepared for it.

Of course, locking oneself in a room for weeks on end to devour prospect information, analyze data, and watch hours upon hours (upon hours!) of game footage sums up the average day in the life of yours truly, regardless of how germy and sickly the outside world becomes. But I’d be lying if I said the cancellation of annual prospect events that lead up to the draft – the under-18 world championships, junior league postseasons, the Memorial Cup, and the NHL’s Scouting Combine – didn’t make this year’s evaluation process more manageable and far less stressful.

Therefore, the work inherent in evaluating close to a thousand 17-to-21-year-old draft-eligible prospects, who performed in different time zones in North America and Europe, needs to yield some sort of output; a general blueprint for the layperson to follow, even if we’re still months away from the draft itself.

The rankings below are not some critical piece to the draft puzzle. Rather, it’s the general opinion of one individual who simply watches a ton of hockey to provide his unsolicited outlook on a draft class. Besides, we’ve already established that the first 20 players picked in a given draft year never become the 20 best NHL’ers, let alone in that order. Still, this is a personal list based on the personal barometers.

1. Create draft “resumes” for all the top players. Things I look at:

• Their role on the team (trusted player, top-line/top-pairing)
• Individual rank in league and team categories, to include scoring, ice time, and shots.
• Performances vs contenders or doormats; top defenses or offenses; top or weak special teams
• Ability to take over games, i.e. create chances consistently
• Body language on the bench or in between whistles
• Achievements, or lack thereof, in international tournaments (if applicable)
• Context (e.g., weak or strong supporting cast)

3. Use “Gun-to-your-head” gut-feel scenarios to determine:

With all due respect to Quinton Byfield, Tim Stutzle, and a host of other talented prospects with franchise-changing potential, this draft has belonged to Rimouski’s Alexis Lafreniere for several years. Although some attention grabbers tried to take the discussion beyond on-ice performance and upside, the truth is that Lafreniere has in his possession the most impressive pre-draft resume of any player since Connor McDavid, and before him, Sidney Crosby. While I won’t go as far as to say Lafreniere will be a perennial Art Ross and Hart Trophy candidate, he has been the lead horse since Day One and continued to solidify an already firm grip on No. 1 overall by winning the MVP at the U20 world junior championship and claiming the QMJHL scoring title. Also keep in mind that it’s just a matter of days until it’s announced that Lafreniere will join Crosby as the only two players in Canadian Hockey League history to win their Player of the Year Award twice before being drafted.

Byfield, however, remains the second best prospect in this draft class. His blend of power, creativity, smarts, and two-way play easily make him the best center in the draft pool. The question is whether or not Stutzle’s explosiveness and excitability during German league play and the world juniors is enough for the team choosing second overall to overlook Byfield’s attributes and potential to physically dominate on or off the puck. It’s definitely a fair question to ask, however, since the feeling of uncertainty surrounding the No. 2 pick (at least outside NHL war rooms) is far greater in 2020 than in any year since 2014. The aforementioned physical attributes – size, power, balance, toughness – is why I give the slightest of edges to Byfield of Stutzle.

I already covered this debate extensively, but for the sake of brevity, I’ll put it to you like this – both have cornerstone potential and can be groomed to become a No. 1 defenseman in the mold of a Kris Letang or Ryan Suter or Duncan Keith or Ryan McDonagh. Drysdale is more offense with underrated defense; Sanderson is more defense with significantly under-appreciated offense. Each one is an elite skater and can quarterback a power play, plus eat a ton of late/close minutes with short recovery periods in between shifts. I’m not trying to punt this one to the sidelines – you can’t go wrong with either one.

Speaking of in-depth analysis, check out the profile I did on Askarov a few months ago. Remember, I’m big on creating draft resumes, and no goalie – and that includes Carey Price, Andrei Vasilevskiy, and Spencer Knight – own a sizable collection of dominant performances before the age of 18 quite like Askarov. People pointing to a par of bad starts at the world juniors as the primary reason to avoid him in the first round are running the risk of them regretting the decision years later when Askarov not only lands in the NHL but potentially becomes the franchise goalie they wish they had. Of course, goalies are way tougher to analyze as teenagers. But Askarov’s confidence and preparation for big games is rarely seen in a netminder at any level, let alone a kid who still hasn’t turned 18.

The whole “you can find a good goalie in any round” excuse is perfectly acceptable as long as you acknowledge that some teams have a poorer track record at developing goalies than others. Knowing that, there is no doubt in my mind that multiple teams have a potential superstar like Askarov in the top five on their internal draft boards.

4. My Three Swedes: Holtz vs Raymond vs Gunler

Without getting into too deep of a discussion, the simple fact is that Sweden will produce its best forward group in several years – Alexander Holtz, Lucas Raymond, and Noel Gunler are all wingers who played the entire season in the adult-age SHL, with Holtz seeing more ice time while the others served as depth players on contending teams. As good as Gunler can be, the real debate pits Holtz against Raymond, mostly because they’ve been linemates at every major international event for the last three years.

Raymond is more the playmaker whereas Gunler and Holtz possess elite scoring abilities. Skating is not a concern for any of them and each have showed the potential to become dual threats – Raymond can snipe it and Gunler and Holtz have underrated passing skills. But it all goes back to draft resumes, and if we were to grade solely on their performances this season, you can argue that it was Raymond who had the least impressive, even within the context of limited minutes.

How so? Raymond did not distinguish himself in a single tournament, when the playing field and ice time were level. Even in brief stints in junior hockey, Raymond was not revealing the consistency desired for a potential top-five pick in the draft.

This process, however, also includes potential, and both Raymond and Gunler had remarkable 2018-19 campaigns. It’s totally understandable if clubs will point to that previous dominance of their age group as the primary justification for choosing them.

For my money, you can’t go wrong with Holtz. He has the battle level, strength, and frame that can withstand the rigors of the North American game, and his shot-release combination is the most impressive of the three.

5. Dmitry Ovchinnikov, where are you?

Well, on my rankings, you can find the Russian scorer somewhere in the 170’s. Hey, at least I didn’t leave him off my 300+ ranking entirely like the folks over at NHL’s Central Scouting, who in April dropped this year’s top cult prospect after ranking him 74th out of 140 European skaters in the January midterms.

From a skill standpoint, Ovchinnikov checks a lot of boxes. He can be flashy and quick; deadly and decisive. He also has decent size, contributes defensively, and was a consistent threat against the tougher teams in the MHL’s Eastern Division.

So why was he dissed by the NHL’s primary scouting arm? That’s a good question, especially since they rarely (if ever) go public with their opinions on snubs. The “Russian Factor” could be a legitimate explanation since some prospects can be adamant about their disinterment in leaving home for North America, and that’s with or without the lure of a KHL contract.

Still, there’s nothing wrong with an NHL club taking a flyer on a talented puck magician like Ovchinnikov, who can marinate in Russia for several years until an NHL team can lure him across the pond. In fact, one can assume there are several teams who disagree entirely with Central Scouting’s rankings and have Ovchinnikov as high as a third or fourth rounder.

Below is the final list of notable first-year eligible draft prospects for the 2020 NHL Entry Draft. These rankings will not change and will stay this way all the way up to the draft and beyond. Players born between September 16, 2001 and September 15, 2002 are in the zone for consideration. The rankings for draft “overagers” will be published in late June and will be included in my annual NHL Draft Report.