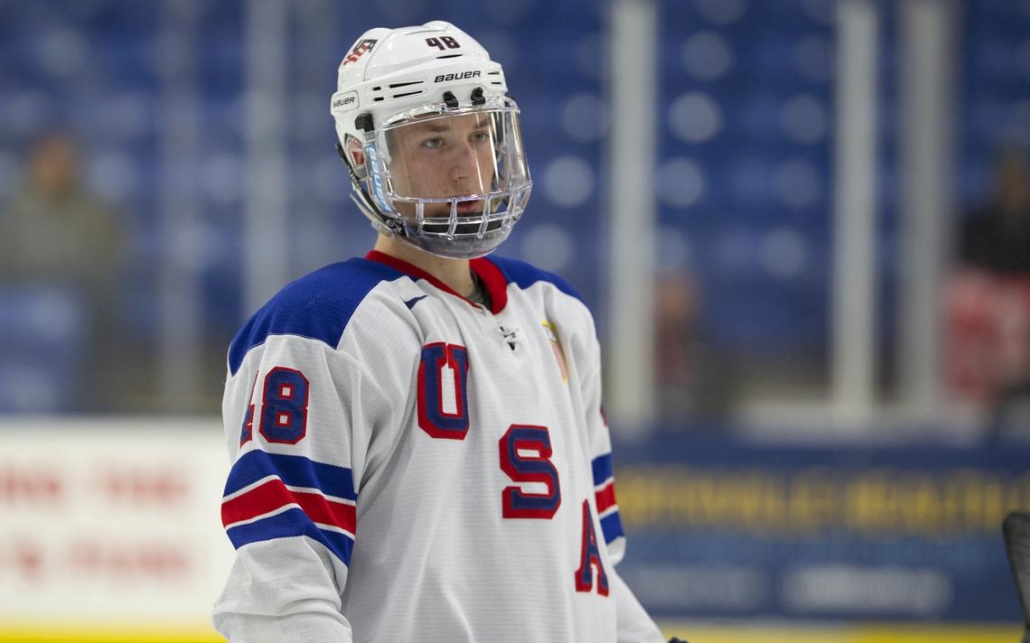 The top American-born defenseman for the 2020 draft and possibly the first one to be selected after Jamie Drysdale, Sanderson is the straw that stirs the drink for this year’s NTDP. He is a plus-plus player in multiple areas, and Sanderson is one of the few draft-eligible defenders who can outshine the most impressive of forwards when it comes to puck control, decision making, and generating offense inside the opposing end.

Sanderson is a clean and skilled puck carrier with soft hands who can be counted on to break out of his end in several ways. The puck seems to remain settled for him regardless of speed, and even sharp changes in direction don’t hinder his ability to stay in complete control. His shot is a primary weapon in his arsenal and Sanderson has proven to score via the slap shot or wrister from anywhere between the circles and the point. One area where Sanderson doesn’t get enough credit for is his passing from forehand or back, and he is more than capable at luring opponents away from the weak side before exploiting the gap with a no-look or backhand pass across the seam. He’s not a power-play quarterback in the classic sense but he does man the left point on the lead power-play unit and executes precision plays off of faceoffs.

Any study of Sanderson’s game centered on individual stats is a waste of time because some of the most important things he does cannot be quantified. For example, unlike most young defenders, Sanderson is as good as it gets when it comes to defending below the circles. Not only does he maintain optimal slot spacing between opponents who are spread out, but his rapid processing time in conjunction with a quick and powerful first step allows him to break up bang-bang attempts from the corner or behind the net with regularity. Additionally, Sanderson’s timing of switch-offs with partner Eamon Powell is practically pro level, and you rarely see both of them battling for the same puck. Sanderson’s stick is highly active in the defensive zone and he always seem to be at least a full stick length from one or two threats in the slot. In terms of defending against the rush, Sanderson maintains a tight gap and will hold firm at his line using quick and timely stick-on-puck thrusts. The beauty of Sanderson’s defensive game is how quickly he meshes all these traits together before collecting the puck for himself and exploding up ice for a counterattack. He also is an excellent penalty killer who keeps the crease clear within the letter of the rule book.

Another area where Sanderson excels at is physicality. At 6-foot-2 and 185 pounds, he already has the length and build to present opponents with an impregnable barrier. Even at 17, Sanderson already has the reputation of being a punishing hitter and will deliver a wallop in any area of the ice regardless of who has the puck. Sanderson is thick and well balanced, to the point where he can absorb a hit from a charging opponent and leave him lying on the ice. He is by no means reckless, however, and the fact that he was whistled for only five minor penalties in his first 41 games proves that defensemen of any age can maintain discipline while being physically assertive.

Sanderson is an excellent skater in all directions. He owns a powerful stride and only needs a few to reach top speed. The double-plus power of his stride doesn’t hinder his agility in traffic, and Sanderson displays smooth actions with the puck on his stick as he weaves or motors past traffic. No that he necessarily needs a head start, but Sanderson’s sharp read-and-react ability allows him to gain that critical jump on opponents in scenarios such as chip-and-chase, 50/50 footraces, and creating a numbers advantage on the rush.

When it comes to hockey sense, few rearguards in their draft year display such acute recognition on or off the puck like Sanderson. He seems to be able to sort through multiple courses of actions within seconds, and proof of this is how many quality scoring chances and points he accumulates of turnovers and faceoffs – two situations that require a firm grasp of the tactical situation. His vision and playmaking are excellent for a minute-eating No. 1 defenseman

#U18: Team USA takes a 1-0 lead over Sweden into the first intermission thanks to this goal by Landon Slaggert via a sweet through-the-legs dish by Thomas Bordeleau, with Jake Sanderson activating off the draw for the other assist. This is as pretty as you can get.#2020NHLDraft pic.twitter.com/GoVUnOSoIk