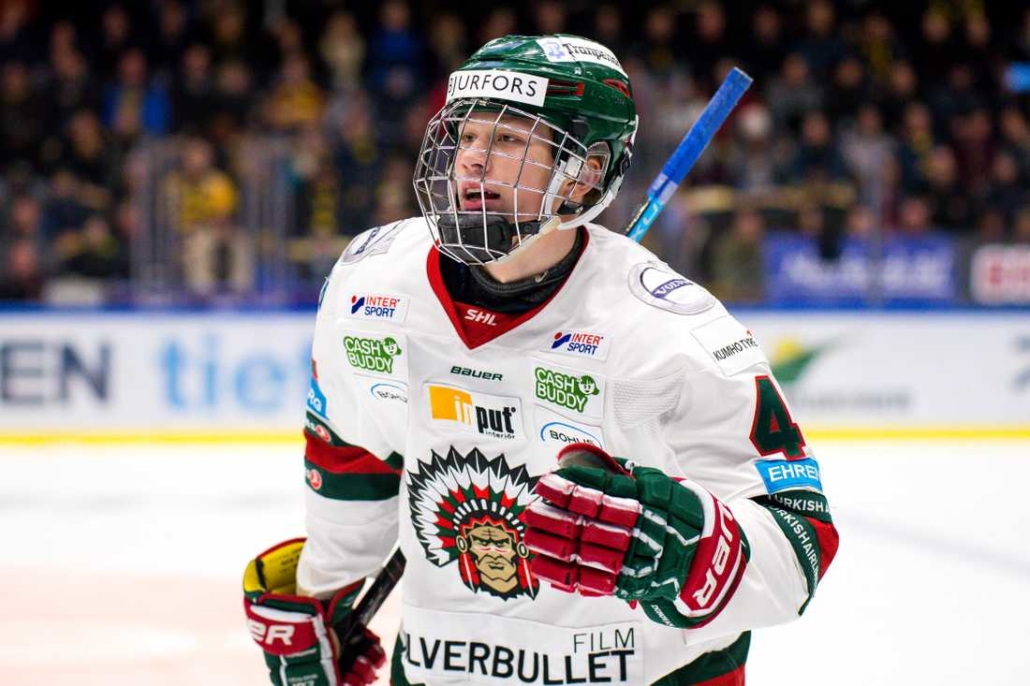 A slightly hunched skater with excellent straight-line speed and a quick first step to generate a powerful stride, Raymond’s ability to accelerate past opponents in the neutral zone result in multiple odd-man rushes per game. Raymond has tremendous upper-body strength for his size and it is quite common for him to power through hits or shoves from bigger defenders. Once he’s free, Raymond keeps his head up and maintains control of the puck, surveying the offensive zone for the best option to score. If he’s tightly checked, Raymond can drop a rapid directional change, especially in the middle of the ice near the prime scoring areas. Making matters worse for opponents is his shot — much like Alexander Holtz, Raymond can sling a bullet of a wrist shot that is labeled for the either corner. He seems partial to the wrister, but his crisp tic-tac-toe passing abilities generate give-and-go scenarios with the end result being a hammer-blow off the pass.

Raymond’s hands and coordination put him near the top of all draft-eligible peers. He has shown time and again the ability to corral bouncing or errant passes on the fly and settle the puck flat in an instant. Being a consistent open-ice threat can result in a significant amount of risk, but Raymond manages it effectively with timely reads and anticipating. If he overcommits or gets caught up ice, Raymond couples his elite speed with a strong desire to compete hard, especially on the backcheck. On several occasions, Raymond darted up ice off his own takeaway, lost the puck, doubled-back to the defensive zone, only to make another steal to counter the other way with numbers. This series of changes in puck travel seems to have a tiresome effect on everyone except Raymond, who is as competitive late in shifts as he is from the start.

Playing either finesse or power game with effectiveness is part of what separates Raymond from most of the pack. He doesn’t get cheated and tries to impact the game at all times with or without the puck. He certainly likes to be in control and run the possession from as early as retrieval behind his own net. You can tell he’s processing multiple options in a relatively short period of time before making a decision, and an oft-used methodical approach into enemy territory still frightens defenders into backing in well off the line. Once he’s inside the zone, you’re at his mercy, as Raymond is incredibly effective off the cycle and shows a clear understanding for set plays. If he isn’t a student of the game, then he sure knows how to play like one, as he’s too fine a playmaker and passer to not know what the opponent is thinking.

Raymond is not scared of physical play and plays with an edge. He can get under an opponent’s skin and does a fair amount of on-ice chirping. Although he shouldn’t be classified as a showboat, his demonstrative manner in between whistles or after a scoring strike probably marks as a retaliation target. Sometimes he tries to do too much, and forces passes or attempts 1-on-4 dangles, but chalk this up to confidence rather than carelessness. In the end, it’s irrelevant, because Raymond can dictate the tempo of a game and make the bad guys pay in a variety of ways.

#SHL: RW Lucas Raymond (Ranked No. 6) with the first of two primary assists in Frolunda’s 4-2 win over Leksand. Those were the first helpers of his SHL career, and he now has 1g and 2a in 7 gp. pic.twitter.com/DRMIYJ1LQ7