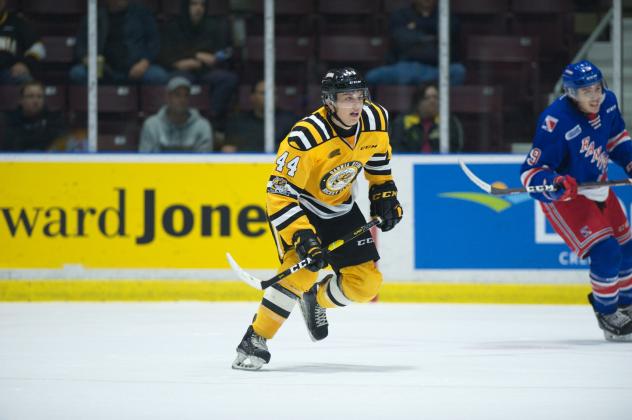 A lethal scorer with NHL bloodlines, Perreault produced his second straight 30-goal season with a team-best 39 tallies for the Sarnia Sting. He was a surprising omission from Canada’s summer Ivan Hlinka entry but he wasted little time taking out his anger on OHL opponents, as Perreault opened the campaign with a 10-game point streak and finished tied for 10th in the league in goals. Also impressive was the fact that Perreault did not see top-line minutes for the Sting at even strength.

Although he won the skating competition at the CHL Top Prospects Game’s combine, Perreault’s in-game speed during OHL competition seems average, at least from a straight-line speed standpoint. If he is to be classified as an elite skater, then there needed to be more examples with Sarnia to validate it as opposed to a free skate under nonstandard conditions. Nonetheless, mobility is not an issue, and keeps a low center of gravity to maintain balance. He also has shown agility when faced with obstacles in the neutral zone and is able to slither his way into a clean zone entry, albeit deliberately. There’s not a lot of panic to his game on the puck, but he puts forth max effort on the backcheck and uses his acute hockey sense to gain an extra step on his opponent. Perreault’s skating style can be classified as hunched with a bit of a wide stride, but getting open is something he did with impressive consistency throughout the season. Sometimes he appears to explode off the hop and catch defenders sleeping, and he can win footraces towards near the boards, where he is tricky enough to spin or reverse his way into shooting position.

There’s no mystery to Perreault’s most impressive attribute — he owns one of the best shots in the draft and is easily one of the its most lethal bad-angle scorers. Perreault can snipe it from anywhere; mostly via the wrister, but he has silky-smooth hands and a soft touch to help him roof pucks from in close. Much like his puck control away from the cage, Perreault is not to be taken lightly near the goal. He looks off targets, slap passes with accuracy and can sauce the disc onto the tape of a cutting teammate. Defenders cannot take their eye off him for long, as Perreault in one motion can split the seam or connect with an open point man while fetching pucks with his back to the assembly area.

Perrault on the puck is the Paulie Cicero of draft-eligible wingers — he may move slow at times, but that’s because he rarely has to move for anybody. In other words, Perreault’s puck control, lethal shot proclivity and pinpoint passing forces opponents to react to him rather than the other way around. Thus, he finds himself in situations where he can dictate the terms and incorporate all his teammates into the attack. One thing to consider is Perrault did not see a lot of ice time with Sarnia top liners such as Jamieson Rees, yet he was able to create chances on his own and battled hard along the boards when necessary.

In terms of special teams, Perreault saw the majority of his time on the first power-play unit but rarely killed penalties. Still, he is defensively responsible by wielding a quick, active stick, keeping himself in passing or shooting lanes, and even dropping down to block a shot. Overall, he is far too lethal to leave open and he makes opponents pay for their transgressions.

Marco Rossi might not live in Apartment 2R, but here he makes a fantastic inside move (when everyone was napping) to trigger a tic-tac-toe goal for Jack Quinn. Nice slap pass also from Jacob Perrault. pic.twitter.com/k5BnYl9pMB