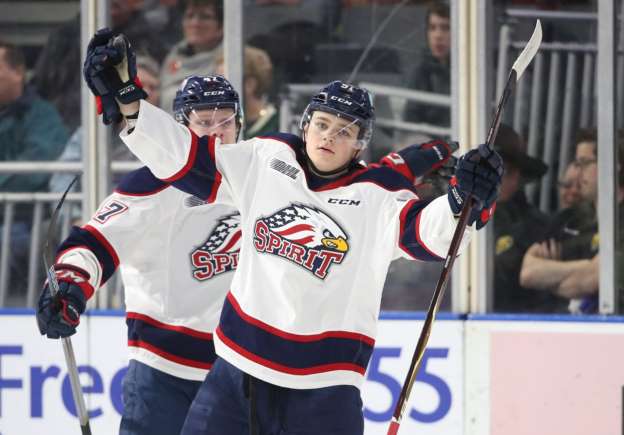 A lethal scorer who possesses an arsenal of deadly moves, including bullets from any area inside the offensive zone, Perfetti is a slick offensive force who also tortures opponents with keen vision and elite playmaking. For the second season in a row, Perfetti tortured OHL defenses with either his shot or his playmaking. His 74 assists and 111 points were second only to fellow 2020 draft prospect Marco Rossi in the entire league, and Saginaw’s next-highest scorer trailed him by a healthy 31 points. In August, he was the top scorer at the under-18 Ivan Hlinka tournament, posting eight goals and four assists in five contests, and his ridiculous shootout performance (three goals on four attempts) helped Canada edge Sweden to earn a berth in the gold medal game.

Perfetti’s dual-threat capabilities make him difficult to predict once he’s taken the puck into the offensive zone, and the amount of room defenders afford him upon entry plays into his hands. Dangerous in both open ice and off the cycle, the Whitby, Ont. native also manages to exploit worn-out opponents by drawing double teams towards as high as the point. Off the puck, he has very quick hands and a sharp eye that allows him cleanly corral hard passes or whistle the puck upstairs in the blink of an eye. Simply put, Perfetti owns an elite shot, and it’s labeled as elite for its lethality in several areas — release, power, and accuracy — and delivered from alternating release points. He makes plays on the backhand with regularity and can roof pucks from in close, and Perfetti can fire up a laser under any conditions. It’s clear that he has a reputation, and goalies seem to dial up their focus meter when he has the puck and a clean look.

Perfetti stays in constant motion to either look for an opening or track the puck to support. He is a strong skater with excellent balance and above-average lateral quickness, and although he displays a wide base and a short stride, his straight-line speed is adequate enough to help him accelerate past defenders or outpace back pressure. Perfetti’s quickness is deceptive, and he shifts gears in one-on-one situations that consistently catch defenders flat-footed. Being strong on his skates also helps him maintain control while taking violent shoves from bigger opponents. Perfetti is not a North-South roadrunner. Rather, he uses quick bursts and directional changes to weave around congestion instead of attacking it head-on, but also capable of dangling his way around multiple checkers before faking a goalie into next week.

Offense is the name of Perfetti’s game, so it’s natural to mark him as a dangerous option for the power play. If he isn’t setting up with the hammer cocked from the circle, Perfetti can control the possession from the wall and thread the needle with perfectly timed cross-ice or saucer passes. From an offensive standpoint, this ability makes him effective as either a wing or a center, yet he seems quite comfortable on the flank. A gentlemanly player, Perfetti is by no means a liability defensively. He will backcheck; use his lower-body strength and leg drive to finish his checks, plus cover up gaps down near the slot. The sky’s the limit for this rising star.

Perfetti scored again — this time with the backhand!pic.twitter.com/1Zra0RCeya