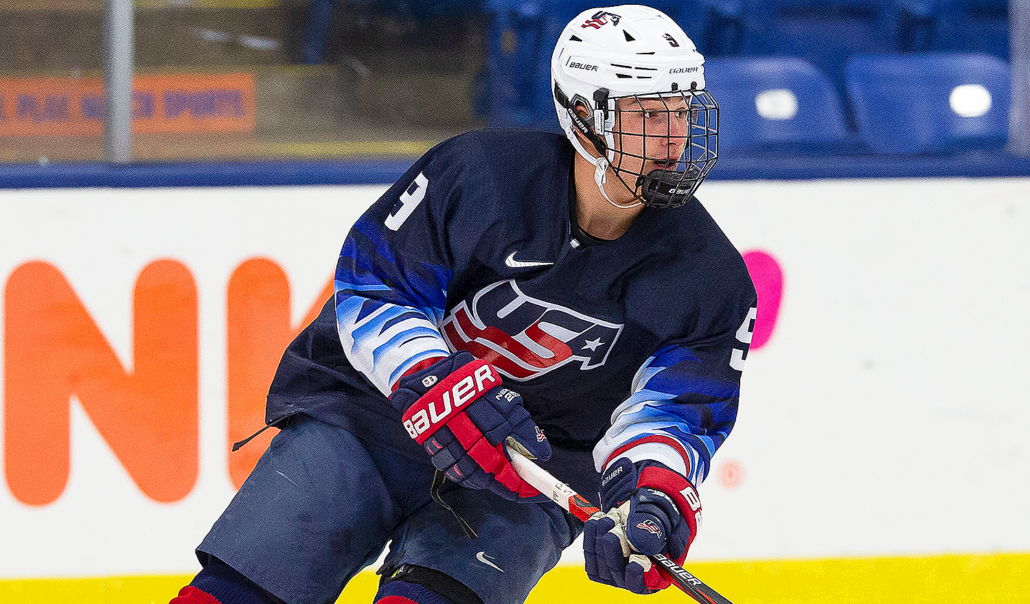 A top-line playmaking center who also boasts a plus shot to score from distances beyond the faceoff dots, Bordeleau led the under-18 NTDP in both assists (30) and points (46), and his team-best 136 shots were 37 more than his closest teammate. He also averaged over a point per game in both the November U18 Five Nations tournament (5 assists in 4 games) and the same event later in February (1 goal, 5 assists in 4 games). He’s committed to the University of Michigan.

The son of former NHL’er Sebastien Bordeleau, Thomas is a 200-foot center with finesse capabilities who can be used in all situations. He is a very good skater with open-ice quickness and pull-away speed, but Bordeleau’s real strength in his skating is his agility. He is an expert at stickhandling around traffic and entering the zone cleanly, and he uses sharp inside moves to increase his passing radius or improve his angle for a shot attempt. If anyone was looking for textbook tactics for zone entries, Bordeleau’s examples can serve as the standard. His patience and decision making in the neutral zone usually yield optimal results.

Bordeleau owns an excellent shot although it’s more for its accuracy and release than for its power. He scored with regularity off the rush against goalies at three different levels – NCAA, USHL, and international. Bordeleau is not shy about slinging pucks from anywhere inside the offensive zone and knows how to use opponents as screens. His ability to fire accurate darts at the net is augmented by his excellent vision and passing skills – Bordeleau is a power-play orchestrator and controls the flow of possession from the half-wall. He can shred both passive and aggressive penalty-kill looks with one-touch passes anywhere inside the box, specifically across the seam.

Bordeleau is a defensively responsible center. He is leaned on for most of the big draws in his own end during late/close situations and was one of the NTDP’s top penalty killers. Bordeleau may not look physically intimidating but he has a high motor and can be an intense battler along the boards. He also gets involved on the forecheck and consistently catches defenseman off guard by either beating them to spots or sneaking from behind and stick-lifting into a takeaway.

#U18: Team USA takes a 1-0 lead over Sweden into the first intermission thanks to this goal by Landon Slaggert via a sweet through-the-legs dish by Thomas Bordeleau, with Jake Sanderson activating off the draw for the other assist. This is as pretty as you can get.#2020NHLDraft pic.twitter.com/GoVUnOSoIk